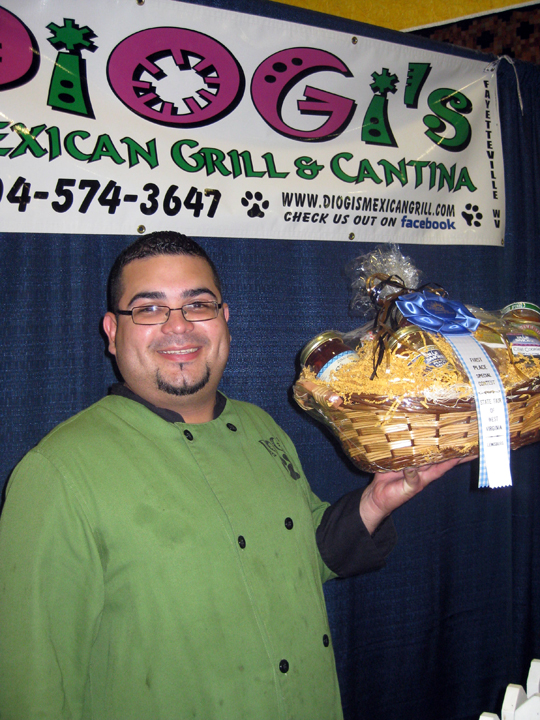 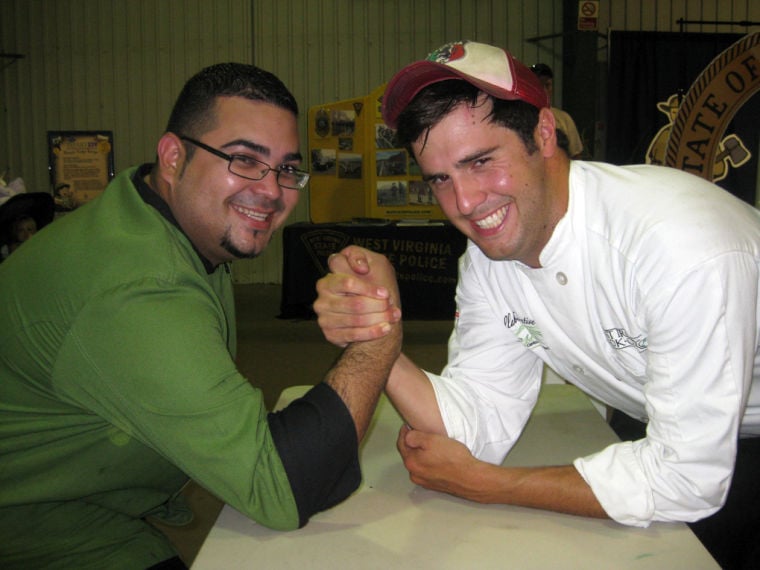 Local chefs Corbin Tonelli and Oscar Aguilar went head-to-head Sunday afternoon at the State Fair’s 5th Annual West Virginia Dueling Chefs Black Box Competition. The cook-off was the ultimate Fayette County showdown — Tonelli is a chef at Smokey’s on the Gorge, and Aguilar is the chef and co-owner of Diogi’s Mexican Grill and Cantina in Fayetteville.

Black box cooking competitions are considered the most challenging of culinary competitions because the food and ingredient contents of the box are not revealed prior to the event.

At 12:45 p.m. on the dot, Tonelli and Aguilar were allowed to open their black boxes. Inside they found beef, bread, and a variety of fresh, local vegetables from the Lewisburg Farmer’s Market, including unexpected surprises like cucumber lemons, cayenne peppers, scallop squash, green zebra tomatoes, organic garlic, and basil. The chefs had 15 minutes to plan their dishes and dash over to the Gus R. Douglass Annex, where they could select three additional ingredients from the West Virginia Country Store to incorporate into their meals. Tonelli selected tomme cheese from Spring Gap Mountain Creamery, Pork Barrel red wine, and Sugar Creek Recipes’ Tangy Tomato Salad Dressing. Aguilar opted for Vu ja de wine, Ordinary Evelyn’s Pickled Beets, and Spring Gap Mountain Creamery’s blue cheese.

The competition officially began at 1 p.m. with the crowd counting down as emcee Cindy Martel, marketing specialist for the West Virginia Department of Agriculture, said, “Gentlemen, start your stoves!”

During the cook-off, audience members had the opportunity to ask the chefs questions, and jesting trash talking was encouraged between Tonelli and Aguilar, who are friendly and have visited each other’s restaurant establishments.

A tilted mirror above the chef preparation area allowed the crowd in the culinary arena to watch as Tonelli and Aguilar chopped, cooked, marinated, and assembled their dishes. The chefs were scored in five categories: cleanliness during preparation, correct professional preparation, audience engagement and commentary, taste, and professional presentation.

At 2 p.m., time was called and the dishes were brought down to the judges’ table. Aguilar presented his beef, blue cheese salad, and chipotle garlic bread. Tonelli chose to prepare beef marinated in wine and sauce, salad, and croutons made from toasted Cuban bread. The three judges left to deliberate, and at 2:15 p.m., the verdict was in.

The audience held its collective breath as Arnold announced that although Aguilar was the winner, it had been a close call, with only a two-point difference.

Aguilar, a veteran chef, opened Diogi’s in Fayetteville in October 2008. Aguilar is a native of El Salvador but moved to West Virginia a few years ago because his wife Barbara is a native of the state. Aguilar was thrilled to claim the title of Champion Dueling Chef.

“It’s very cool, I’m excited,” said Aguilar, posing for pictures in front of a Diogis banner. “It is a huge honor to win.”

Aguilar wasn’t the only one who enjoyed the Food Network-style challenge.

“It was a lot of fun,” said Harman, who also judged the cook-off last year. “It was another way to promote West Virginia Agriculture and remind us how important it is. Both chefs did an excellent job, and I would order either dish!”

Tonelli, an Oak Hill resident and raft guide, recently graduated from Mountain State University with a degree in culinary arts. When Tonelli was 15, he was working as a dishwasher at a restaurant, when someone suggested he start cooking — and he’s been at it ever since. He’s worked at Smokey’s on the Gorge for nine seasons, and for the last four years has traveled to Canada to cook in a trade show with the Southern United States Trade Association.

“This competition is really important because it reminds the public of the importance of local products,” said Mary Legg-Moses, rural business coordinator for the West Virginia State University Extension Service.

“I think people underestimate the abundance of local products, which are actually easy to get. This event also shows the audience new, interesting ways of preparing food.”

Champ Aguilar and runner-up Tonelli both won Blue Smoke gift baskets and free fair tickets for the day for participating in the event.