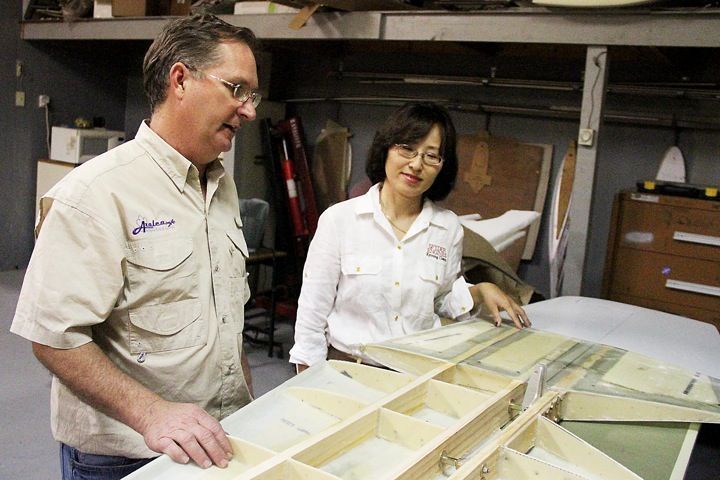 Bill (left) and Kyoung Clapp stand next to the elevator and horizontal kit for the Saberwing mockup. 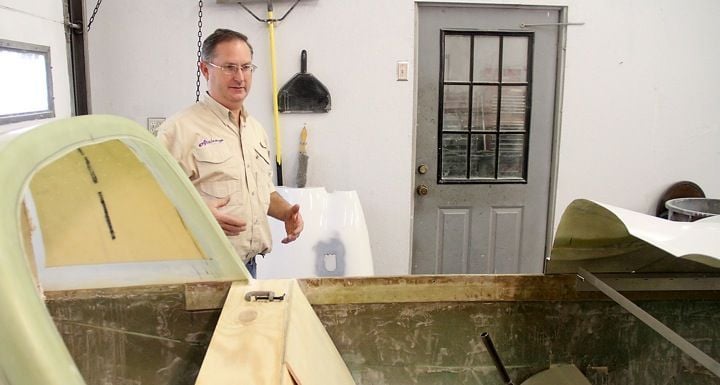 Bill Clapp stands next to a mockup for his Saberwing model airplane, which he plans to have finished by this year’s end. 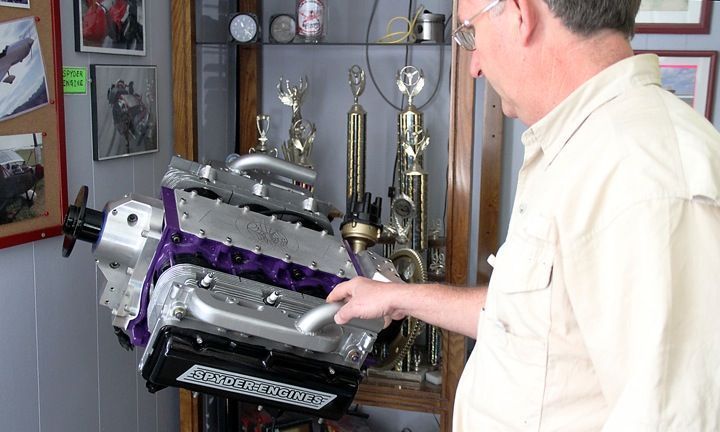 Bill (left) and Kyoung Clapp stand next to the elevator and horizontal kit for the Saberwing mockup.

Bill Clapp stands next to a mockup for his Saberwing model airplane, which he plans to have finished by this year’s end.

VALDOSTA, Ga. —  For years, Bill Clapp worked in car restoration while his airplane work was a hobby.

Clapp had a passion for building and designing airplanes, a passion partly informed by his dad's work as a missionary pilot.

Part of that passion was converting automobile engines to aviation use, with Clapp taking the engines out of Chevrolet Corvairs and adapting them.

“Most aircraft are air cooled,” Clapp said. “There's really only two major automobiles that were ever air cooled and that's VW and Corvair.”

When Clapp decided to double down on his hobby and open Azalea Aviation about two-and-a-half years ago, those engines were one of the first products the company offered in its Spyder Engine line.

However, engines aren't all Azalea Aviation offers. After years of designing, planning and testing, the Georgia-based aviation business is offering the Saberwing, a small plane kit that customers can order and build themselves.

“Experimental aircraft is a whole world unto itself,” Clapp said. “In the experimental aviation market, you can fly on homebuilt stuff.

“Our kit we've designed, you can do it in about 500 hours of work. Maybe 1,000. It depends on your skill level and how much time you can devote to it. Some kits can take thousands of hours, but they're more complex, much more expensive.”

“Anything in life you do, you can either teach yourself or pay for someone to try and teach you,” Clapp said. “My realm is you teach yourself."

“You learn what works and work doesn't. And you learn from other people too. The airplane I designed is an evolution of several different airplanes and ideas,” Clapp said.

Azalea Aviations has begun taking pre-orders for the Saberwing, with parts currently being shipped out to a few early customers as they become available.

By the end of the year, the finalized Saberwing kit will be available, and customers can receive the whole thing at once.

“If you can get people to where they can own an airplane and it costs the same, basically, as owning a luxury car, that's not bad. Most people think buying an airplane is way over what they can do.”

Azalea Aviations—composed of CEO Clapp and General Manager Kyoung Clapp, along with Lamar Campbell and David Poirier—has been demonstrating the Saberwing at airshows, with plans to attend the upcoming Sun N Fun air show in Florida.

“It can take years to get into the market of what we're doing,” Clapp said. “It's doable, you just have to work up slowly, especially in this economy.”