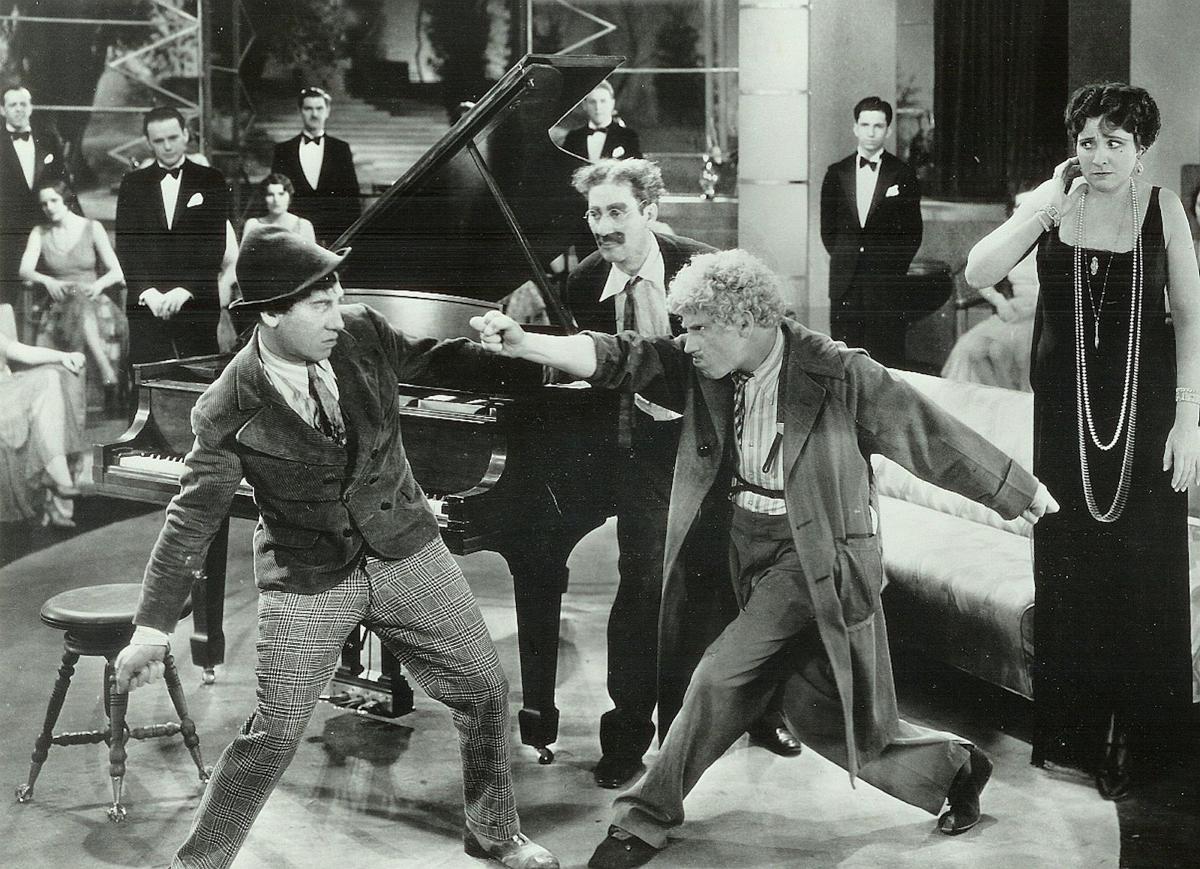 The Marx Brothers are pictured in a scene from "Animal Crackers" as Margaret DuMont looks on warily. 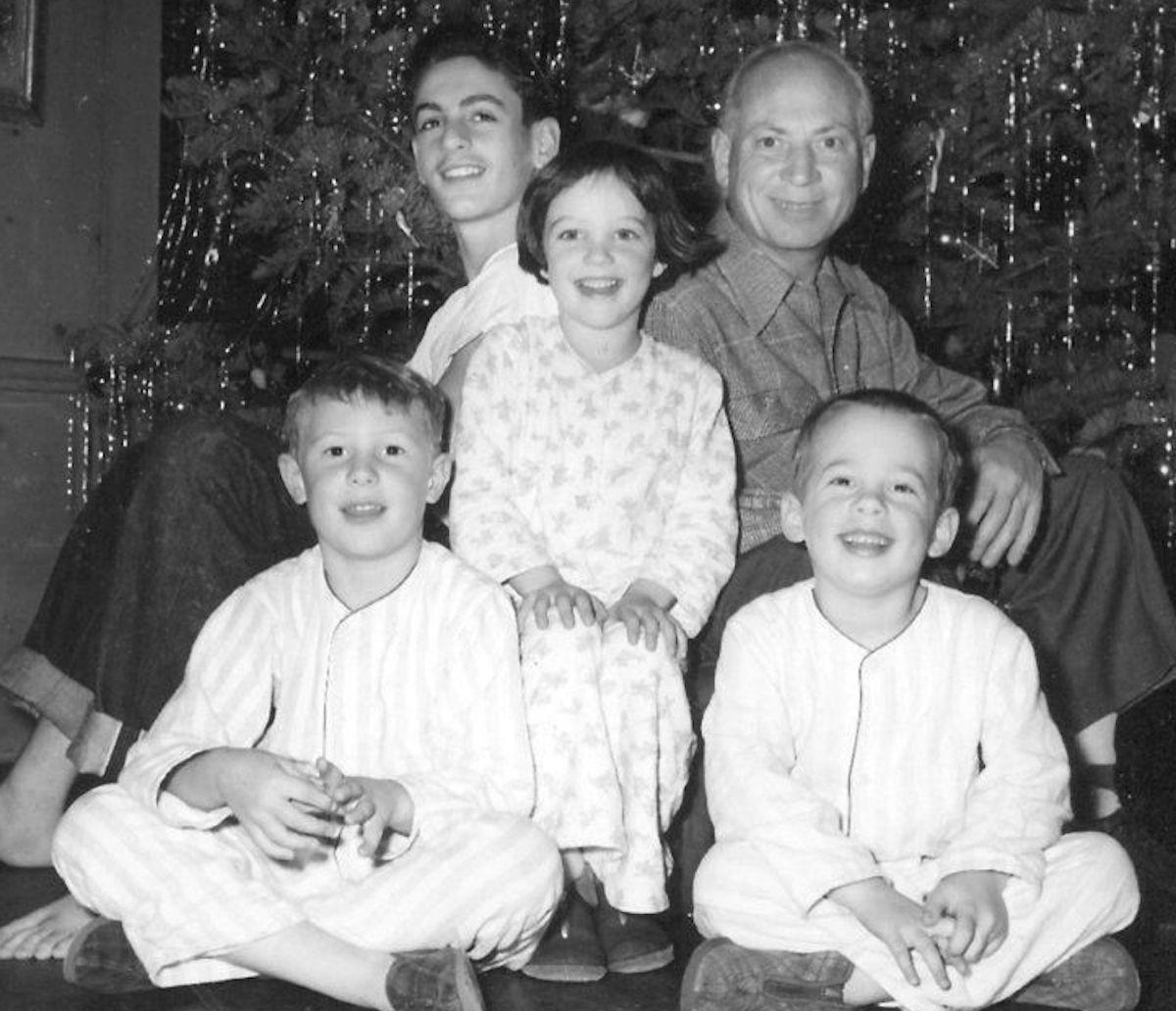 Harpo Marx, at right in back, is pictured with his children Bill, sitting next to him; Minnie, in the middle; Alex, at bottom left; and Jimmy, at bottom right. 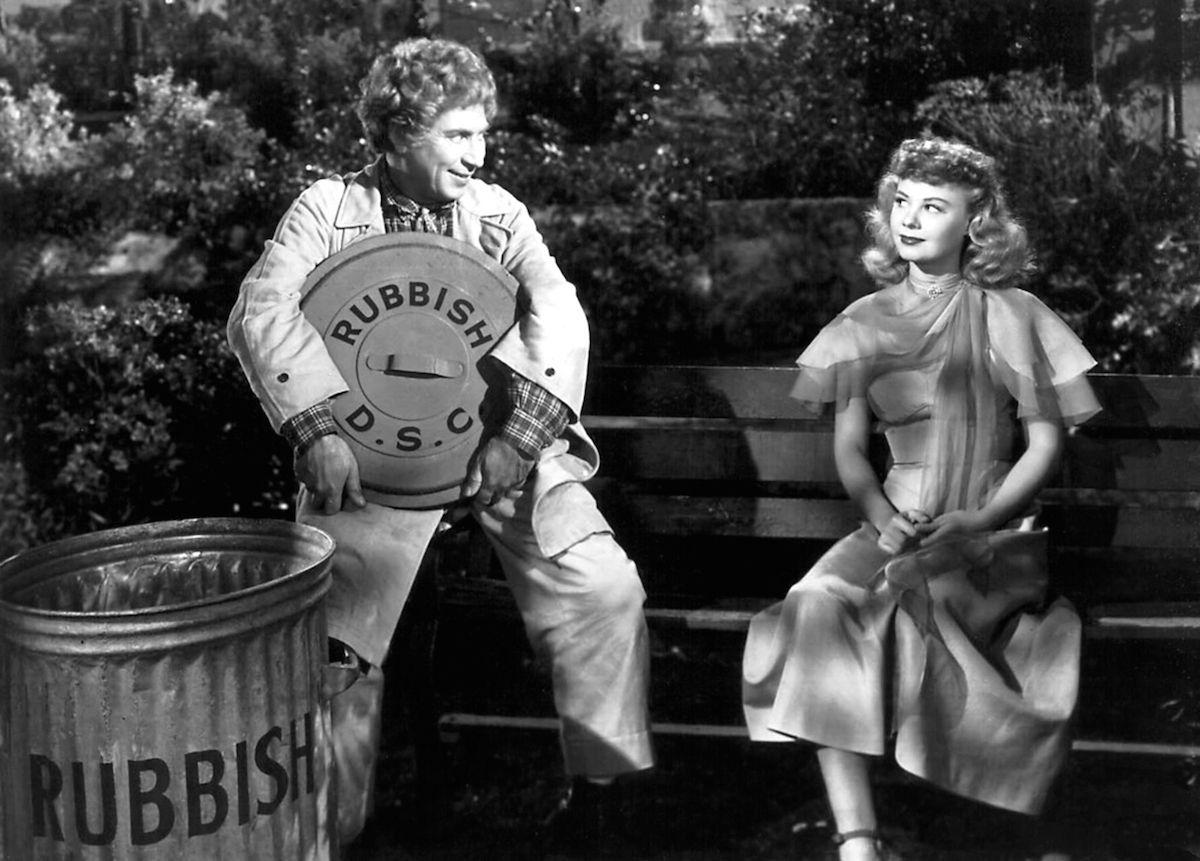 Harpo is pictured with Vera-Ellen in a scene from "Love Happy."

The Marx Brothers are pictured in a scene from "Animal Crackers" as Margaret DuMont looks on warily.

Harpo Marx, at right in back, is pictured with his children Bill, sitting next to him; Minnie, in the middle; Alex, at bottom left; and Jimmy, at bottom right.

Harpo is pictured with Vera-Ellen in a scene from "Love Happy."

The final Marx Brothers film is generally considered to be “Love Happy.” Premiering in San Francisco in 1949, it was released throughout the U.S. the following March – 65 years ago in March.

Since Groucho, Chico, and Harpo never appear on screen together, Marx Brothers fans have little “love” for the movie. Nor were the Brothers particularly “happy” making it, although it did provide some enjoyable moments showcasing Harpo’s silent talents.

Harpo’s son, Bill Marx (see www.harposplace.com), was 12 when the film was released.

“It was a difficult film for dad to do,” Bill told me in a 2009 interview. “Originally it was going to be his movie. But in order to get financing, the producer had to write Chico and Groucho into the story. So the final film was nothing like dad originally had in mind. It was an awful experience for him, but he had to do it as he was under contract.”

Harpo, of course, was the silent Marx Brother known for his outrageous on-screen mimes. Softly-spoken with a distinctive New York accent in real life, according to son Bill, he was largely mute in public, too.

“He would rarely speak for any sort of public relations event or on TV to pitch something,” said Bill. “Very rarely did he ever speak on stage. I’ve got some audio recordings of his, but they will never be heard publicly. There’s not a whole lot, mostly family recordings.”

Some recordings of his voice have found their way to the Internet over the years, much to the disappointment of the Marx family.

“We were all actually very disturbed when those things came out,” said Bill. “It was contradictory to his philosophy of the character he created and the public embraced. That's why he once turned down oodles of money from a TV network to say just one word. He felt that would violate the public's trust in the mime they knew as Harpo, thus diluting its curious mystique.”

At home with his four children, Harpo naturally didn’t give his family the silent treatment. He was, daughter Minnie Marx told me, a devoted dad.

“He never raised his voice to us, ever,” she said. “We were each treated with respect and love. In the early days when he had to travel a lot for his work, the time with the kids became very special.”

She says Harpo was also a man of simple tastes. “He never drove a fancy car, didn’t wear expensive clothes from France or Italy, or live an extravagant lifestyle. Simple things made him happy.”

“My dad taught me that you always have to look for the good in people. He never had a negative thing to say about a person, at least that I ever heard. He also taught me to think before you speak, especially when you are mad.”

In addition to his silence, Harpo was also recognized for his harp playing.

“He loved to practice,” recalled Bill. “He’d do it for 2-3 hours a day whether he was working or not. He just loved the harp – its feeling, its sensuality, the vibrations, and the harmony and sounds of the chords. The harps you see in the films were his personal instruments.”

Harpo died in 1964, but his harps have not remained silent.

“When he passed away, my mother and I went to Israel and donated them to the Rubin Academy of Music, now the Jerusalem Academy of Music and Dance,” said Bill. “Students are still playing them, which is wonderful.”

(Thomas teaches at Auburn University at Montgomery, Ala., and has written features, columns, and interviews for over 550 magazines and newspapers. Follow on Twitter @TinseltownTalks.)