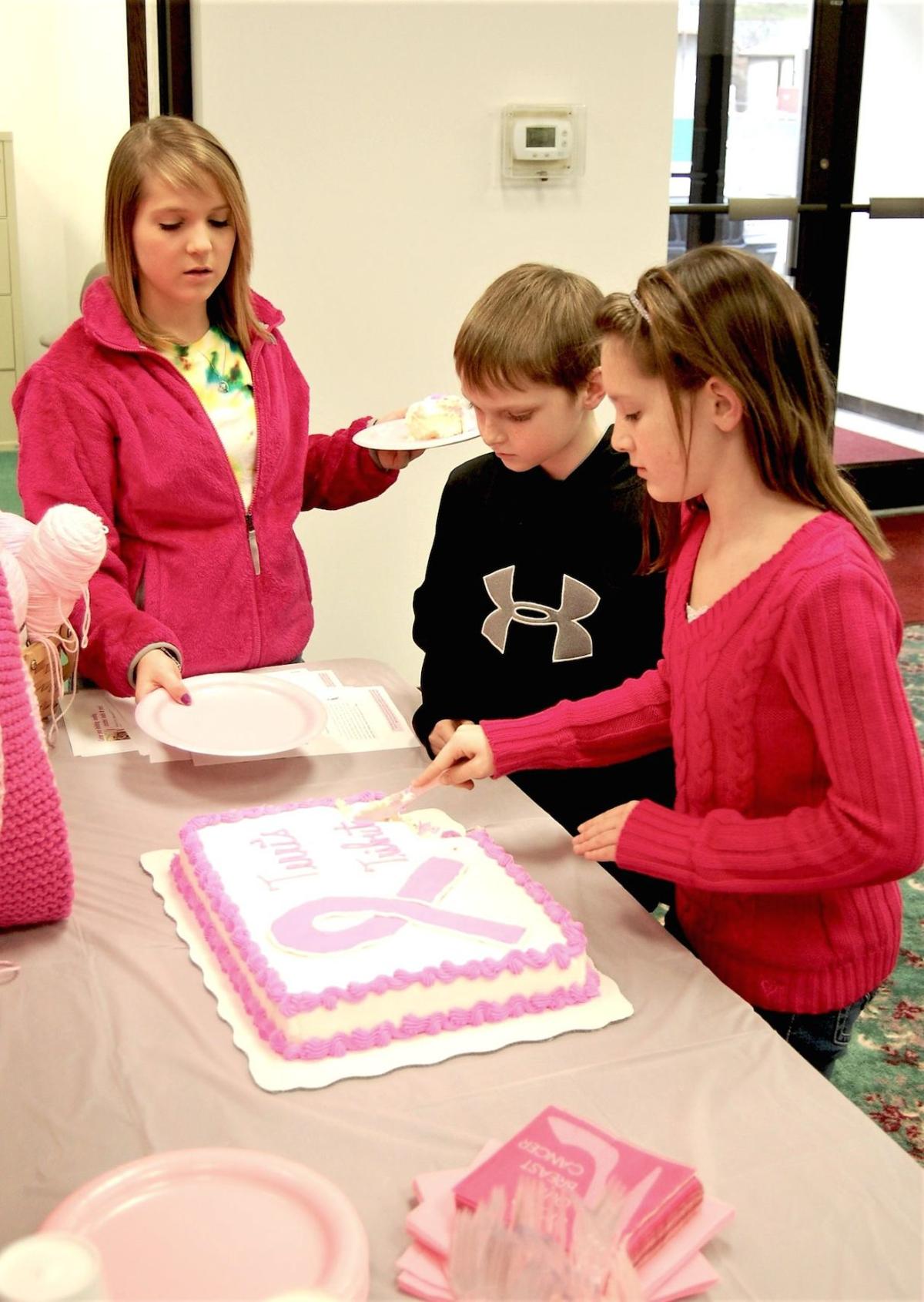 Barry and Terri Massey’s children Jamie, from left, Josh and Jordan, are pictured at the kick-off of Terri’s Tribute in January 2010. The event was held at Fayette County National Bank in Oak Hill on Jamie’s 14th birthday. Family and friends of the late Terri Treadway Massey started Terri’s Tribute to provide support to the children of victims of breast cancer. 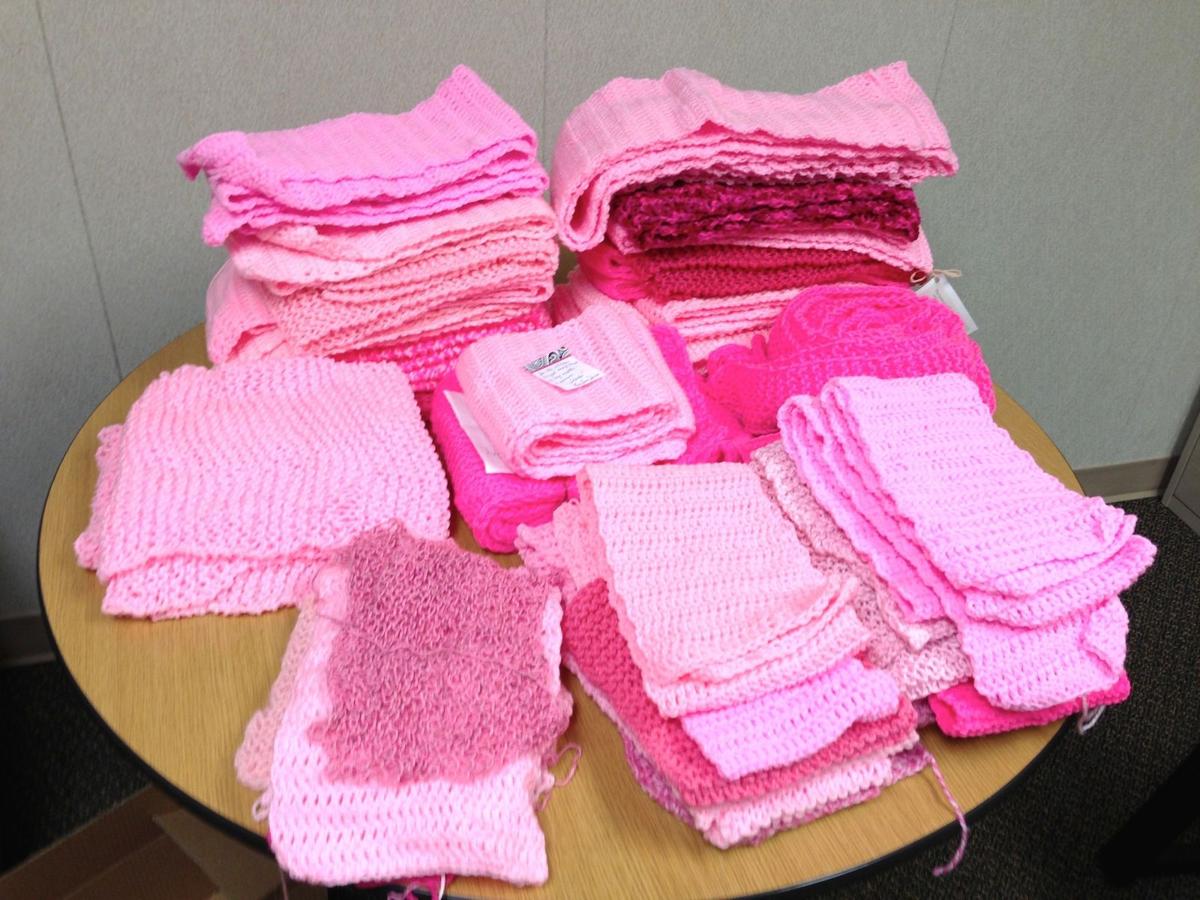 Pieces of crocheted pink ribbons have been created by volunteers from around the country in honor of those lost to breast cancer. The pieces have been sewn together to create what is known as “the world’s longest pink ribbon scarf” by members of Terri’s Tribute. Nearing two miles in total length since its inception in 2010, the scarf has gained new life as lap blankets for those fighting cancer.

Barry and Terri Massey’s children Jamie, from left, Josh and Jordan, are pictured at the kick-off of Terri’s Tribute in January 2010. The event was held at Fayette County National Bank in Oak Hill on Jamie’s 14th birthday. Family and friends of the late Terri Treadway Massey started Terri’s Tribute to provide support to the children of victims of breast cancer.

Pieces of crocheted pink ribbons have been created by volunteers from around the country in honor of those lost to breast cancer. The pieces have been sewn together to create what is known as “the world’s longest pink ribbon scarf” by members of Terri’s Tribute. Nearing two miles in total length since its inception in 2010, the scarf has gained new life as lap blankets for those fighting cancer.

On Oct. 29, 2009, a much-loved friend, wife, mother, sister and daughter lost her hard-fought four-year battle with breast cancer at the age of 39.

Terri Lynne Treadway Massey was surrounded by those who loved her and supported her during those four years and after her passing, those same friends and family members knew they must do something in her memory to make a difference for others fighting the fight.

They helped Terri find peace by making her a promise. “That pledge — to take care of her three children — has inspired a scholarship fund to ensure that her children, and other children who’ve lost a parent to breast cancer, will go to college,” The Fayette Tribune reported in 2010.

In January following Terri’s passing, that same group of family and friends gathered together at Fayette County National Bank in Oak Hill to introduce the T-Team and celebrate the beginning of an effort that’s been ongoing for nearly a decade. With help from Denise Light at FCNB, a savings account was opened that has grown into a charitable trust to provide college scholarships for children of breast cancer victims. The kick-off was held on the 14th birthday of Terri and Barry Massey’s elder daughter, Jamie.

Through the years, that core group of volunteers has hosted breast cancer awareness walks, blood drives, fundraising golf tournaments and a donorama to sign up those willing to be bone marrow donors, along with awarding scholarships to local young people, including the Masseys’ daughters, Jamie and Jordan.

Perhaps the most visible effort of the group, however, has been the creation of what is termed the “World’s Longest Pink Ribbon Scarf.”

“The group envisioned a pink scarf made up of pieces crocheted or knitted by anyone who wanted to add to it,” Cindy Whitlock, another of Terri’s friends, wrote last year in an article in The Register-Herald. “Those pieces would be darned together into one long scarf, a visual depiction of the connectivity everyone has to breast cancer.”

The pink ribbon is the instantly recognized symbol of Breast Cancer Awareness Month, therefore Kay Bess, whose son, Ashley, was a close friend of Terri’s, began organizing knitting circles at which volunteers knitted sections of scarf that were added together. The plan was to raise awareness of Breast Cancer Awareness Month and to display the ribbon at the Fayette County Relay for Life.

By September 2010 when the scarf was first displayed at Tamarack during Breast Cancer Awareness Month, its length had stretched to 1894 feet, according to published reports in The Fayette Tribune.

After that display, visitors to Tamarack spread news of the project around the country and, after passing out directions for knitting pieces to be added to the scarf, its length grew exponentially.

According to Dana Treadway, Terri’s stepmother, the scarf is now nearing two miles.

Nearly 10 years after her death, those who made the pledge still are living up to that promise.

Terri always told those who surrounded her that “something good will come of this.”

At the first of the year, Terri’s brother, Anthony, told a reporter for The Register-Herald that the continued efforts of Terri’s Tribute have proved the truth of Terri’s assertion.

“…The uplifting side of loss is all the support all of us affected by breast cancer have gained through Terri’s Tribute,” Treadway said. “We have displayed a magnificent pink scarf which touches everyone who sees it. We’ve had 10 successful blood drives because giving blood was something Terri believed in, and something which added time to her life.”

Whether sharing the pink scarf with those in other parts of the country, raising funds through the golf tournament or sponsoring the upcoming Nov. 9 blood drive, Treadway said, “Everything we’ve done through Terri’s Tribute is the ‘something good’ which she predicted, something that was very difficult to foresee during her fight against breast cancer.”

Dana Treadway said earlier this month that the benefits that have come through the work of Terri’s Tribute are immense.

“We have thus far been able to help three students with scholarships,” she said, including the Masseys’ daughters. Jamie, who was married Oct. 12 and now is a mother herself, has completed her LPN training and is looking forward to becoming a Registered Nurse. “Jordan got her scholarship this year and she is going to college at Bluefield State,” Dana said. “Josh is a senior this year, so provided he pursues education after high school, he’ll get a scholarship.”

The lives that have been touched, though, go far beyond the Masseys and Treadways, she pointed out.

One other young man who lost his mother to breast cancer while he was still in middle school has received a scholarship for college, and more will be awarded in the future, she said.

While still keeping track of the “length” of the pink ribbon scarf, Dana says it’s not just lying around gathering dust.

“The scarf is being displayed this month at several locations, but we have started to give the scarf a new life and have started to distribute sections to cancer patients,” she said.

Lap blankets have been donated to individuals who are battling breast cancer and Terri’s Tribute presented 10 more blankets fashioned from the scarf to patients at the Beckley Appalachian Regional Hospital’s oncology unit last week.

In other awareness efforts, Terri’s Tribute volunteers will be on hand at the Oak Hill High School girls soccer game on Thursday, Oct. 17 to talk about breast cancer awareness.

Jordan Massey, a 2019 graduate of Oak Hill High, was a member of the school’s soccer team. During her high school years a tradition developed for the Red Devils to wear pink jerseys and socks for a game during Breast Cancer Awareness Month.

“Even though Jordan’s not on the team anymore, the girls soccer boosters voted to buy the girls pink jerseys and socks and they’re wearing them to every home game this month,” Dana said.

One of the Terri’s Tribute team members will speak during halftime of the Oct. 17 game.

The ongoing efforts of Terri’s Tribute are aimed at three goals, Dana said.

“We always say Terri’s Tribute is about three things.

“It is about breast cancer awareness, just drawing people’s attention to the fact that early detection is the best key.

“It’s just so important for women. We need our moms and sisters and grandmas and aunts,” she said.

“You can rarely talk to anybody that hasn’t been affected by breast cancer in some way or another.”

The second goal is related to the promise.

“The second thing is to raise money for scholarships to help children who have lost a parent.”

At the kickoff to Terri’s Tribute way back in early 2010, Denise Light stressed that point.

“Unfortunately, Terri is not the only mom, sister, neighbor, friend, wife or daughter this community of ours has lost to breast cancer,” said Light, a breast cancer survivor. “So we encourage anyone who’s been touched by breast cancer to contribute to this fund, which will help the children who’ve lost so much,” she was quoted as saying in an article in The Fayette Tribune.