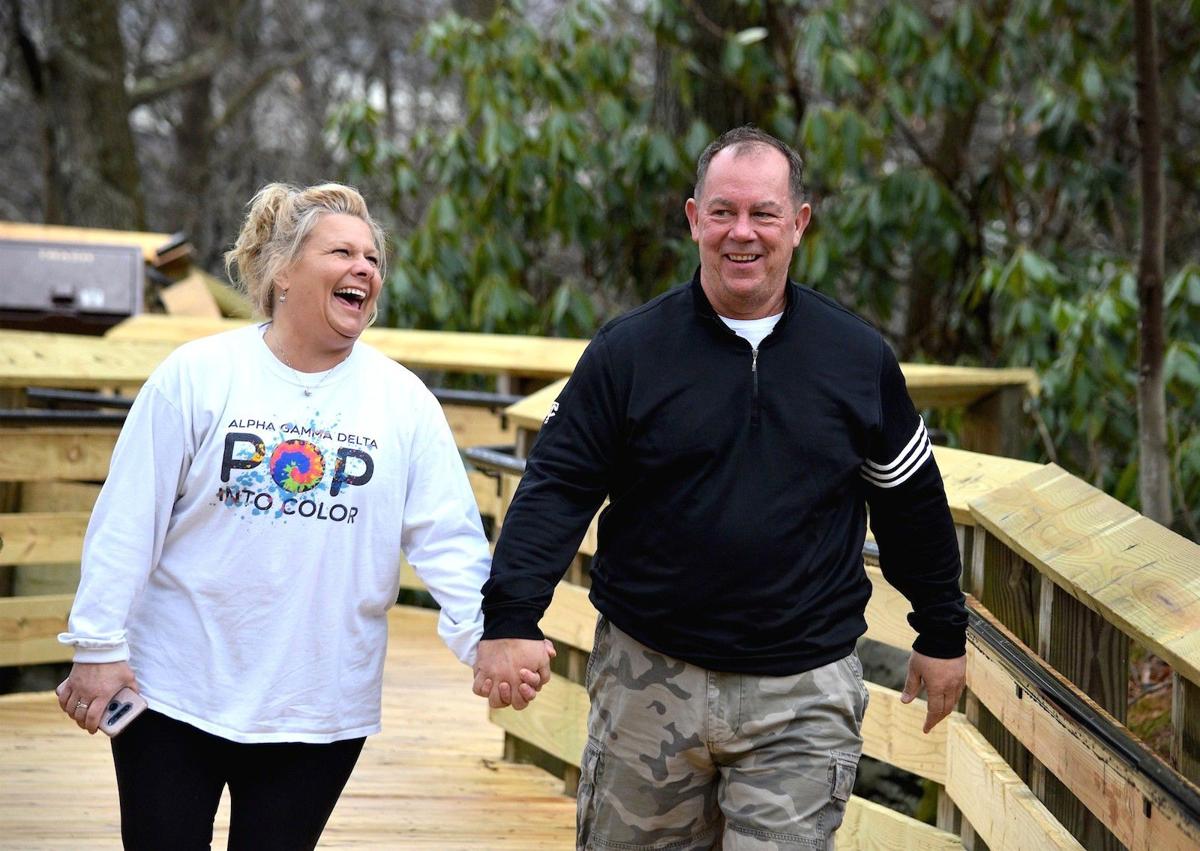 Krista Campano, left, and her boyfriend, Shaun Heenan, shared a light moment as they walked back up the steps after viewing the New River Gorge Bridge Tuesday at Canyon Rim Visitor Center. 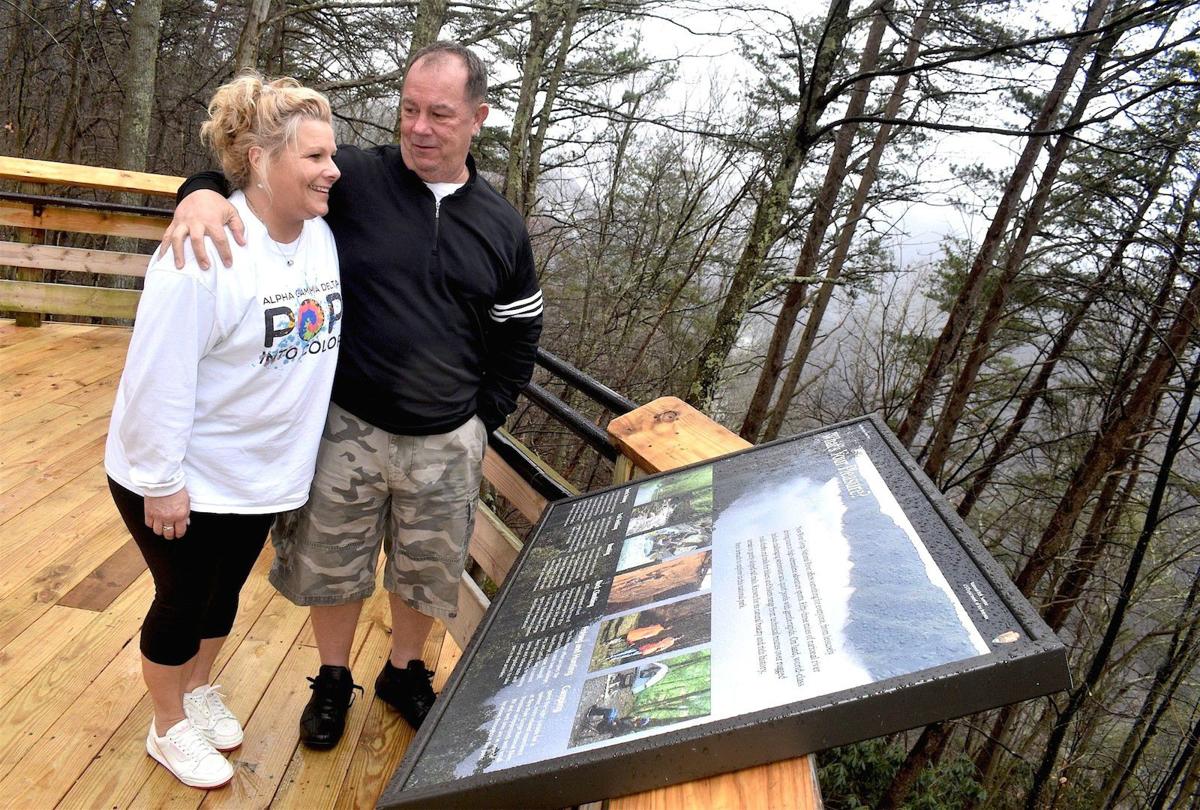 Krista Campano and Shaun Heenan take in the Fayette County sights, including checking out the New River Gorge Bridge.

Krista Campano, left, and her boyfriend, Shaun Heenan, shared a light moment as they walked back up the steps after viewing the New River Gorge Bridge Tuesday at Canyon Rim Visitor Center.

Krista Campano and Shaun Heenan take in the Fayette County sights, including checking out the New River Gorge Bridge.

The closure is in response to the latest guidance from the White House, the Centers for Disease Control and Prevention (CDC), and local and state authorities to promote social distancing. Outdoor facilities including hiking trails, campgrounds and river access points will remain open, according to a NRGNR press release.

"The health and safety of our visitors, employees, volunteers and partners is our number one priority," Watts said in the release. "While the park remains open for hiking, biking and other recreational activities, Canyon Rim Visitor Center, which regularly hosts up to 1,000 visitors per day during March and early April, will remain closed until further notice."

The day before the closure was announced, Shaun Heenan and his girlfriend, Krista Campano, traveled down from Fredonia, New York and made a pit stop at the visitor center, which is located at Lansing.

New York's response to COVID-19 fears included closure of restaurants, theaters and casinos on Monday, along with the urging that non-essential shops do the same, according to bbc.com.

On Tuesday, the couple was traveling south to the Lake City area of Florida to visit his aunt and uncle. The plan then called for them to head to the Atlantic Coast toward the Flagler Beach/St. Augustine area. They left Fredonia, near the Pennsylvania line, at about 8 a.m. Tuesday.

"It was planned already," Campano said of the trip. "We were supposed to leave Thursday and fly down on Delta, but we decided since both of our businesses were shut down that we'd leave a couple days early and drive down and take our time," in the process avoiding airports and airplanes.

"Not that either one of us is real concerned about the coronavirus; we just didn't want to put up with the hassle at the airport or everything else, and we did have the time to boot," Heenan said. "And even though we're not as concerned about ourselves, we still have concerns for the impact it might have on the older population, the aging population. Even as we're traveling, we're washing our hands."

He said his aunt and uncle "are good" but "heaven forbid you give somebody something. Our concern is more for everybody else.

"To me, I treat it like any other flu in every year. We wash our hands anyhow; that's the type of business we're in." The aim is to "keep ourselves germ-free, no matter what time of the year it is."

Heenan owns an Irish pub in Fredonia, but the pub doesn't serve food, so his business "is pretty much at a standstill. I'm closed right now, because I have nothing to offer."

Campano owns a successful catering firm and could still deliver as of early this week, but many of the conferences, schools or events she would normally be delivering to are no longer being held. She says she has cancellations "all the way through April."

"We're hoping this doesn't carry on for more than two weeks," Heenan said. The money they and many other business owners are losing is "money you're never going to get back.

"Unfortunately, we're both in the hospitality business at this time, so neither one of us has a check coming in." They also "have people (who work for them) out of work," which isn't the best scenario.

Heenan hopes it's a short-term situation. "Pray to the Good Lord we're going to get back to work soon. I never wanted to work more than I do now."

While harboring concerns, Heenan and Campano took time to enjoy their Tuesday layover in Fayette County.

"This is probably one of the most beautiful states in the country in my eyes," Heenan said, as the couple prepared to take a drive underneath the New River Gorge Bridge.

"It's absolutely beautiful, even this time of the year, with the clouds and the rain," Campano said. "It's gorgeous."

The park urges visitors to do their part when visiting the park and to follow CDC guidelines to prevent the spread of infectious diseases by maintaining safe distances; washing hands often with soap and water for at least 20 seconds; avoiding contact with eyes, nose and mouth; covering mouth and nose when coughing or sneezing; and most importantly, staying home if sick. For high-risk populations, such as the elderly and people with underlying conditions, park staff is encouraging extra caution and adherence to CDC guidance, especially for those who are at higher risk of serious illness.

"We will be monitoring the national and statewide situation as we continue to assess and modify our operations according to CDC guidance," said Watts. "Information about current operations, programs, facilities and closures can always be found on our park website at nps.gov/neri." The park is also sending out notifications on its social media platforms, noted Watts. Updates on national park areas nationwide will be posted on www.nps.gov/coronavirus.