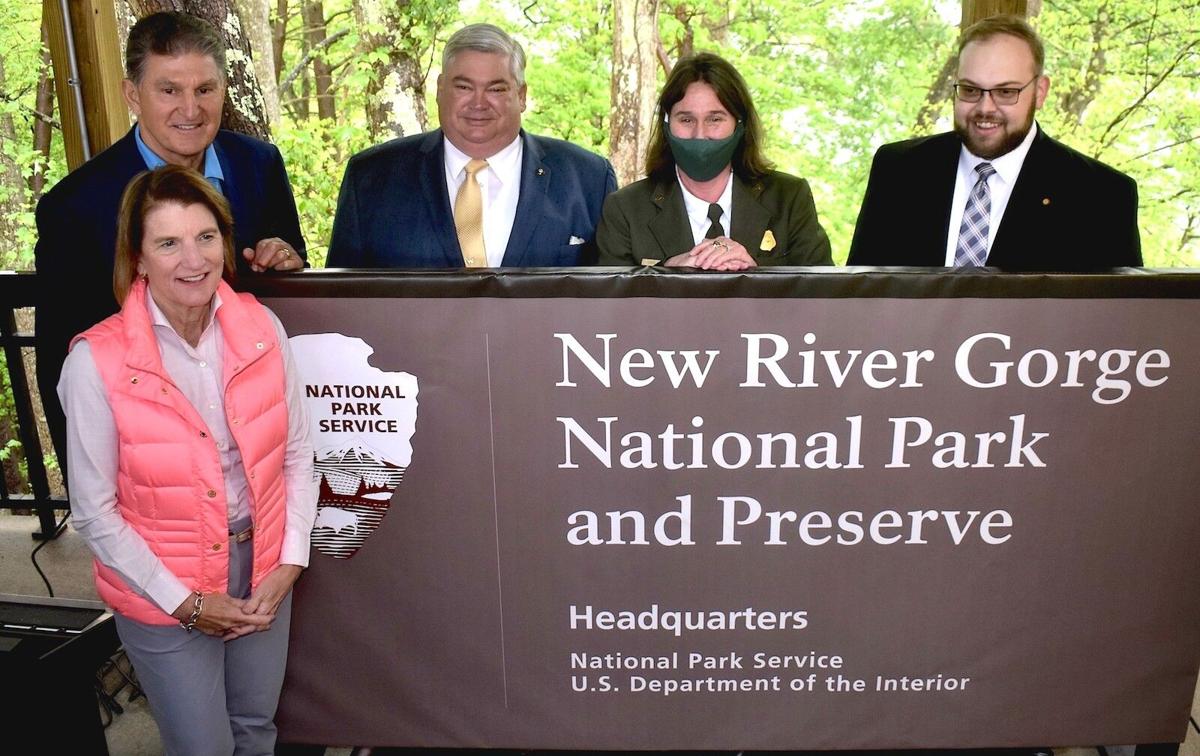 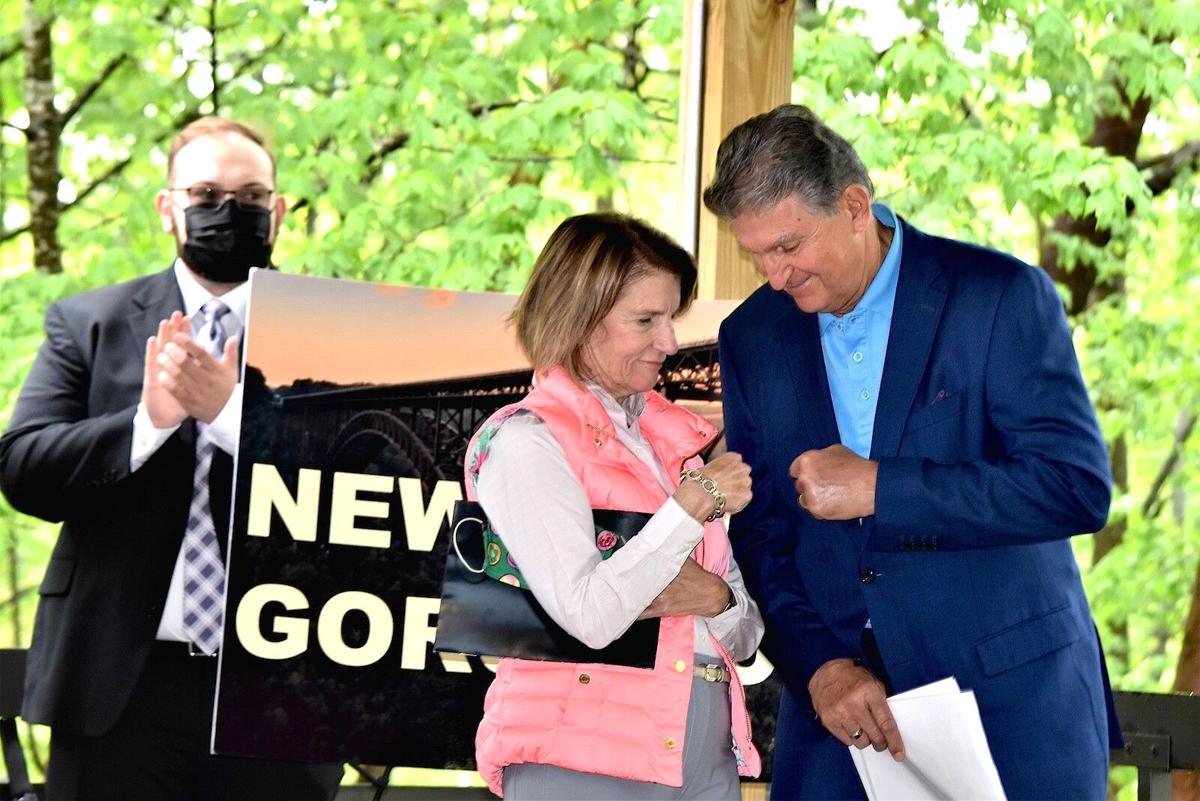 U.S. Sen. Shelley Moore Capito, R-W.Va., left foreground, and U.S. Sen. Joe Manchin, D-W.Va. prepare to share a fist bump as Superintendent Lizzie Watts thanks the congressional delegation for its efforts. Austin Haynes, a member of the W.Va. House of Delegates, looks on. 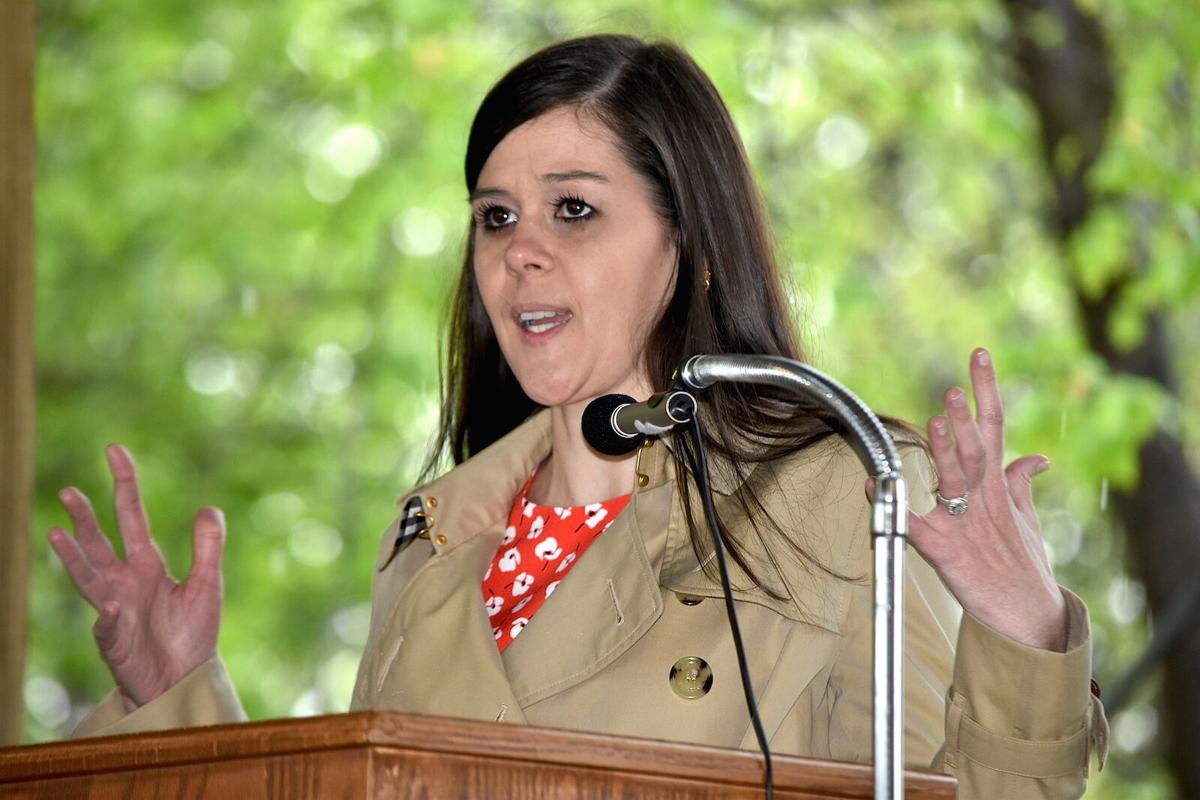 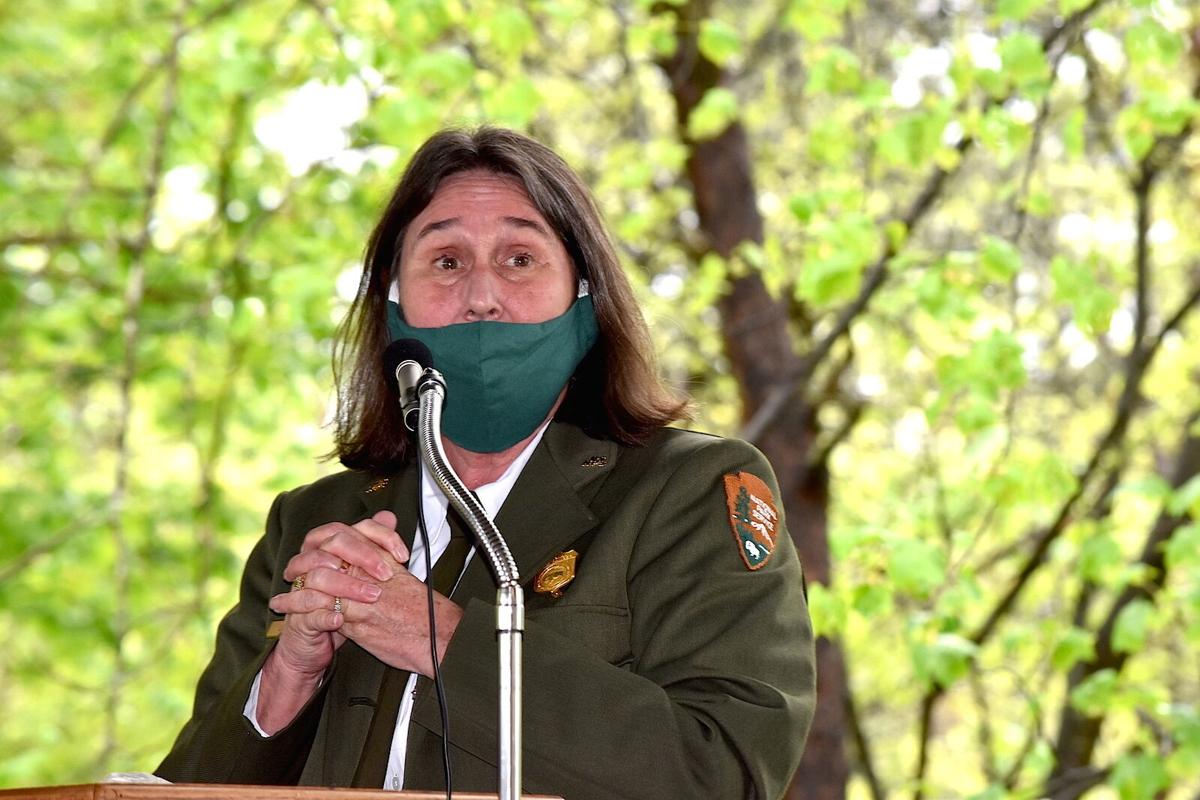 U.S. Sen. Shelley Moore Capito, R-W.Va., left foreground, and U.S. Sen. Joe Manchin, D-W.Va. prepare to share a fist bump as Superintendent Lizzie Watts thanks the congressional delegation for its efforts. Austin Haynes, a member of the W.Va. House of Delegates, looks on.

LANSING — The rain and wind made their presence felt Wednesday morning at the Canyon Rim Visitor Center.

But that did little to dampen the spirits of those assembled for a special ceremony to unveil new signage for the recent change in designation for the local entity of the federal park system.

"Becoming a national park really is a true honor, for all of us. For the people that live next to this park, the people that work here, all of the citizens of West Virginia."

The dedication and hard work over the years of (many at the federal, state and local level) resulted in the national park designation, Watts said. "This is the gift we give the next generation, ... the generation past that, and the one past that.

"We all knew how special this place was. Y'all have known it for years. And y'all came together" and worked to make the designation change a reality. "Give yourselves a big hand, because this is a long time coming," Watts said to those present. "And to be honest, I couldn't be more proud to be the first superintendent of the New River Gorge National Park and Preserve."

Watts said many factors mesh together to make the area special, whether it be the region's historical legacy, plants, birds or outdoor activities such as climbing and boating. "I just wanted to say welcome to your national park."

Addressing Watts and her staff, U.S. Sen. Joe Manchin, D-W.Va., said, "You all do such a great job."

Switching direction to the nation's 63rd National Park and 20th National Preserve, Sen. Manchin said, "I don't need to tell you all what this means," adding that to "see the growth that's happening in the area ... is unbelievable."

"The park is something special," Manchin said. "We had to find that balance between the park and the preserve. And the balance was to keep your culture ... but also give us an opportunity.

"These things don't happen unless everybody comes together. It's not about politics."

Manchin also mentioned the "unbelievable legislation" that resulted in the 2020 Great American Outdoors Act, which provides full and permanent funding for the Land and Water Conservation Fund (LWCF) and addresses about $20 billion in deferred maintenance in the country’s public lands. That will help create an opportunity to make West Virginia "truly transformational," he said.

Again addressing Watts, Manchin said, "We're just so appreciative of all the things that you all have done here to give us the opportunity. All hands are on deck. We all work together, and we will continue to."

He referenced an old saying that goes 'You better tell your story before someone tells one on you." While West Virginians have often allowed outsiders to "define us," sometimes in "unflattering" terms, Manchin said, "We have a chance right now to show them who we really are, and this park is basically a window to West Virginia. I'm so appreciative and pleased to be part of it."

"I think if you went to the back channels of where we started with this and where we ended up, the National Park Service and certainly Lizzie were absolutely critical," said Capito, who mentioned during her remarks that the NPS christened the Canyon Rim Visitor Center on May 7, 1983.

Capito said much was gleaned from public hearings, discussions with park technical staff, and the community in working through the legislation. "The tradition of the national river needed to be maintained while transforming to park and preserve," said Capito, who said the work of U.S. Rep. Carol Miller, R-W.Va., was "critical on the House side."

Citing increased visitor numbers, Capito pointed to the saying, "If you build it, (they) will come."

"We didn't build this; God built this," she said. "But you know what? They're coming. And we've got a structure now to really be that magnet."

She said she is "extremely proud of the efforts that you all (outfitters and other business leaders, community leaders, government officials, etc.) have put forward."

The funding mechanisms for the Great American Outdoors Act "are really going to be key to the stewardship of this particular park" and others across the country, Capito added.

Chelsea Ruby, West Virginia Secretary of Tourism, said the magnitude of the change in designation "is even bigger than any of us can imagine."

Ruby also expressed a large dose of appreciation for the support of the local community. "This has been a movement that has been going on for quite some time, and it wouldn't have happened without a community that is so welcoming. You all are absolutely a tourism community. You know it, you believe it, you act it."

According to Ruby, actual visitation to the area in the first quarter of this year is up 14 percent over 2019, which she labeled a "normal" year. "Tourism is a bright spot in our economy, and it's going to continue to grow."

"So far we're up over 15 percent in parking lot numbers for this year over 2019 and 27 percent over 2020," West said in an email. "Visitor center numbers aren't a good reflection as we're limiting numbers right now."

Website browser visits were up 90 percent for the first quarter of 2021 over 2020, with most people entering through the main park page, as opposed to the majority that used to visit through the New River Gorge Bridge page, she said. The second heaviest page hit has been "Plan Your Visit," while the third has been "Park Map." "To me, that's a telling number," West said.

"Visitor questions have definitely changed with more 'how do I see the park?', 'What park experiences can I have here?,' 'Where can I camp in the park?,'" said West. Many visitors also want to get their Park Passport To Your National Parks booklet stamped, along with their Junior Ranger Badges, at the newest national park.

Park officials are still submitting project proposals for maintenance work through the Great American Outdoors Act process, and other budget stream proposals won't roll back around until after the fall of 2021, said West.

According to a press release from Capito's office, the New River Gorge Park and Preserve Designation Act created a 65,165-acre preserve and a 7,021-acre park; opened up 368 acres to hunting in Grandview for the first time ever; kept open 301 acres of the Lower Gorge following requests from local hunters; authorized the NPS to bid on additional land for the preserve that amounts to 3,711 acres; and authorized the NPS to acquire up to 100 acres for parking only, which is needed as the area has seen an increase in visitors.