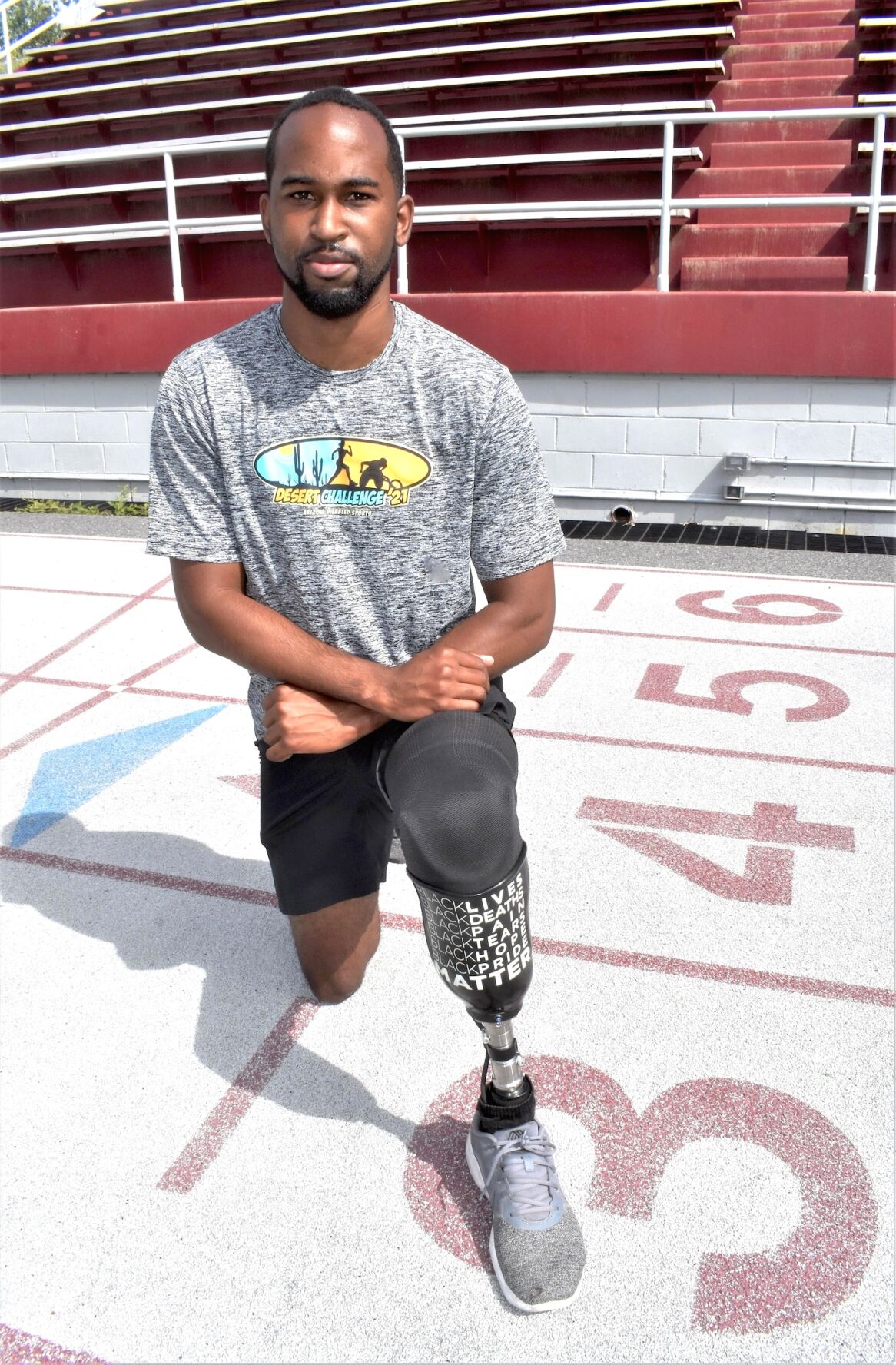 Jonathan Gore, photographed on June 7 in Athens, is competing this week in the U.S. Paralympic Trials in Minneapolis, Minn. 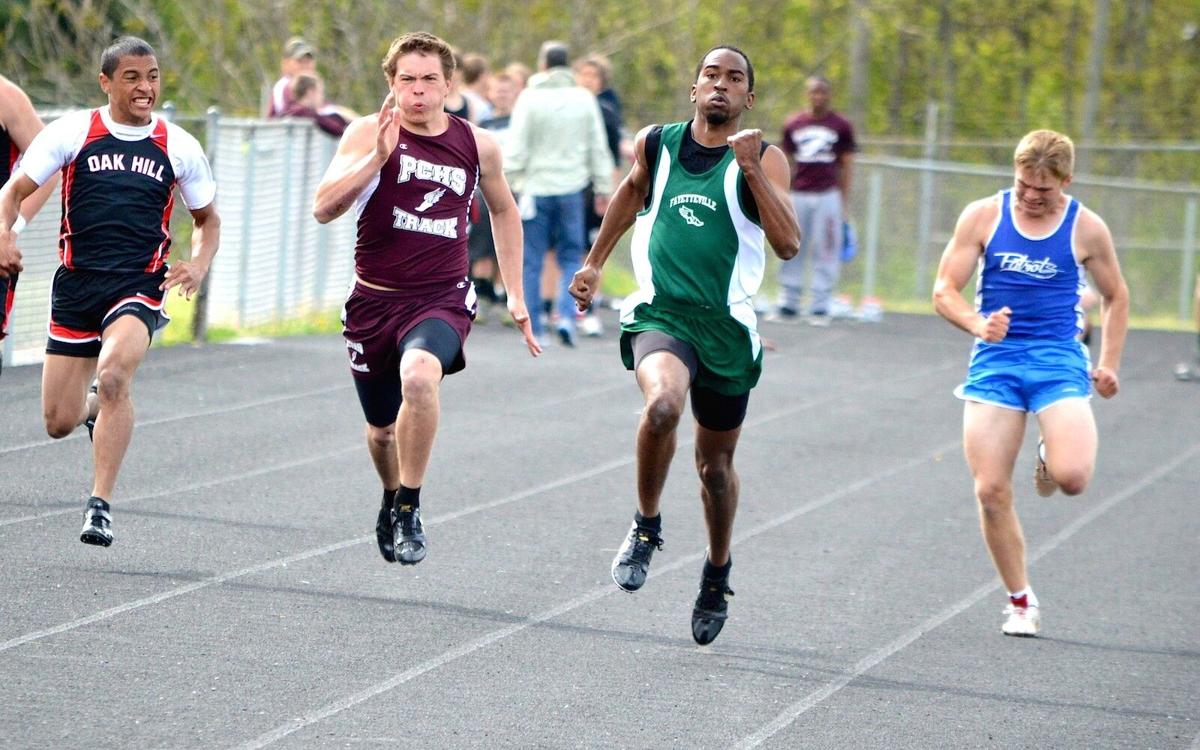 Jonathan Gore, third from left, is shown during his competitive days at Fayetteville High School. 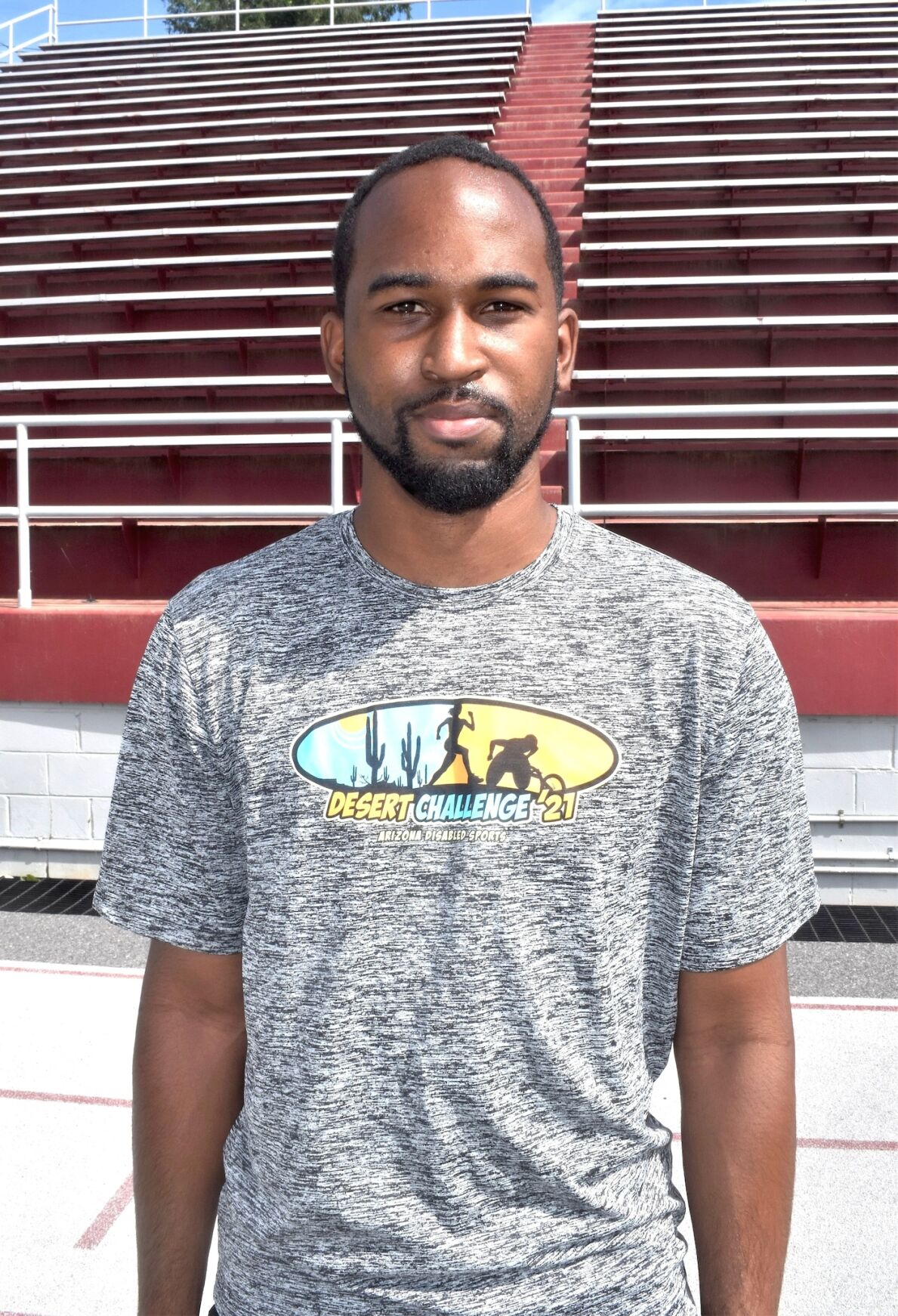 Jonathan Gore, photographed on June 7 in Athens, is competing this week in the U.S. Paralympic Trials in Minneapolis, Minn.

Jonathan Gore, third from left, is shown during his competitive days at Fayetteville High School.

ATHENS — A Fayette countian with a solid track and field résumé is striving this weekend to take it up a couple notches with a berth on the U.S. Paralympic team for international competition in Tokyo.

Fayetteville's Jonathan Gore, currently a graduate assistant coach for jumps and sprints with the Concord University track and field team, is participating in the sprints in this weekend's U.S. Paralympic Team Trials in Minneapolis, Minn., which feature track and field, cycling and swimming. The entrants are vying to earn the chance to represent the United States at the 2021 Paralympic Games in Japan this fall. This weekend, team trials for track and field, swimming and cycling through Saturday, and the Paralympic teams will be announced Sunday, according to the Star Tribune newspaper.

The track and field events are being staged at Breck High School in Golden Valley, the newspaper reported.

Gore, who was a standout track and field athlete at both Fayetteville High School and Concord University, suffered an injury in a work accident about three years ago, he recalled recently. "I was mowing grass (in a sit-down mower), and it ran over my heel and cut my heel off," he said. "Instantly (although he hadn't see it yet) I knew I was going to have it amputated."

This year marks his first true competitive season since he finished his time as a Concord University athlete four years ago. The amputation was classified as T64 (below the knee). While he went through the process of getting a blade to be more ambulatory, Gore hadn't competed much again until recently.

"At that time (when the accident occurred), I was done with (his Concord career) for over a year," he said. "I was already content knowing that I wouldn't compete again."

He said he was told by his mother, Lee Ann, that one of the three questions he asked doctors coming out of surgery was if he would run again. Gore called that "a divine revelation."

"In March of 2019 (three months before he got his Cheetah blade), I was watching videos of para-athletes competing and I came across a guy by the name of Jarryd Wallace," Gore explained. "So I looked him up on Instagram and I introduced myself to him.

"So, from there he helped me and my prosthetist understand how my blade worked and how it should fit, so I could run at my full potential." Wallace then set Gore up with representatives in November 2020 so he could begin the process of becoming involved in the Paralympics.

At the urging of a friend, he traveled to Mesa, Ariz. for the Desert Challenge Games in late May of this year to get classified and elevate his qualifying standard. He raced to a clocking of 10.95 seconds to win the 100 in his age group and classification. That followed an 11.09 effort in the preliminary round. His best 100 time at Concord was 10.84. "To prime me up for the trials, I went out there and raced. ... Starting out, it felt weird. I had to get my racing mindset back.

"When I went to Arizona, it felt like I could just race again."

"I wasn't quote unquote nervous; I was just more ... the fact I wasn't going to raise my expectations so high ...," Gore added of the Arizona meet. "I just came in with the notion that I was just going to run and whatever times came out, came out. But I didn't think I was going to run this fast in Arizona."

Gore said last week he was anticipating the opportunity to compete against other athletes this weekend with a chance at qualifying for the international meet on the line.

Gore's sprint preliminaries were canceled Thursday, so he will compete in finals in the 100 and 200 on Friday evening and Saturday, said his coach, Concord head track and field and cross-country coach Michael Cox.

"Every race is different," said Gore. "It's just if I execute, then I have a high chance of going (to Japan); if I don't execute, then I could still go but it might not go the way that I want it to."

At Concord, he captured the Mountain East Conference 200 during his senior outdoor season, and he was men's MVP of the MEC championship meet. Gore still holds Concord's indoor (7.14 meters, or 23.42 feet) and outdoor (7.16 meters, or 23.49 feet) records in the long jump.

He's currently pursuing his masters in health promotions at Athens.

Cox, the veteran Concord coach, admits he still gets a little misty when discussing Gore's accident and subsequent recovery. "In the hospital, I was crying. It's been overwhelming, really. I get emotional talking about it."

Cox and an assistant, R.J. Anderson, have worked with Gore to make the adjustments necessary for his second sprinting life. But, Gore has done the heavy lifting. "He grabbed it by the horns," the coach said. "There was some trial and error, but it was just his determination and drive (that got Gore where he is). He's a tough kid. I'm super proud; I can't imagine it myself."

Gore, who said the staff at Fayetteville Physical Therapy has been a major component in his recovery, said adjusting to his blade while trying to get back in the competitive groove some doing. "One thing that was good about my background was I (competed) before I got the blade. It was just like riding a bike."

There was at least one big change, though. "My left leg used to be my pushing leg out of the blocks, so I had to completely change my blocks, but once I got used to it, everything fell back into place," he said.

Gore said his family, as well as the Fayetteville and Concord University communities, have provided major support over the last three years. So, too, have strangers.

While making memories of his own, Gore will miss out on a big moment in his family's life. He was set to be the best man in his twin brother, Brian's, wedding this weekend, but the meet conflicts with that. "I'm thankful that he's so understanding about it," said Jonathan.

"I never had a 'depression period,'" Jonathan Gore said of his post-accident days. "After I got out of the hospital (four days after surgery), I had to go back to the hospital because of a slight infection. I was fine going back to the hospital, but I thought that I would only be there one or two days. Then my surgeon told me that I had to stay until he told me I could go home.

"So I was more frustrated because I was beginning to have a sense of normalcy and that was being pushed back. But, God got me through that and I never looked back."