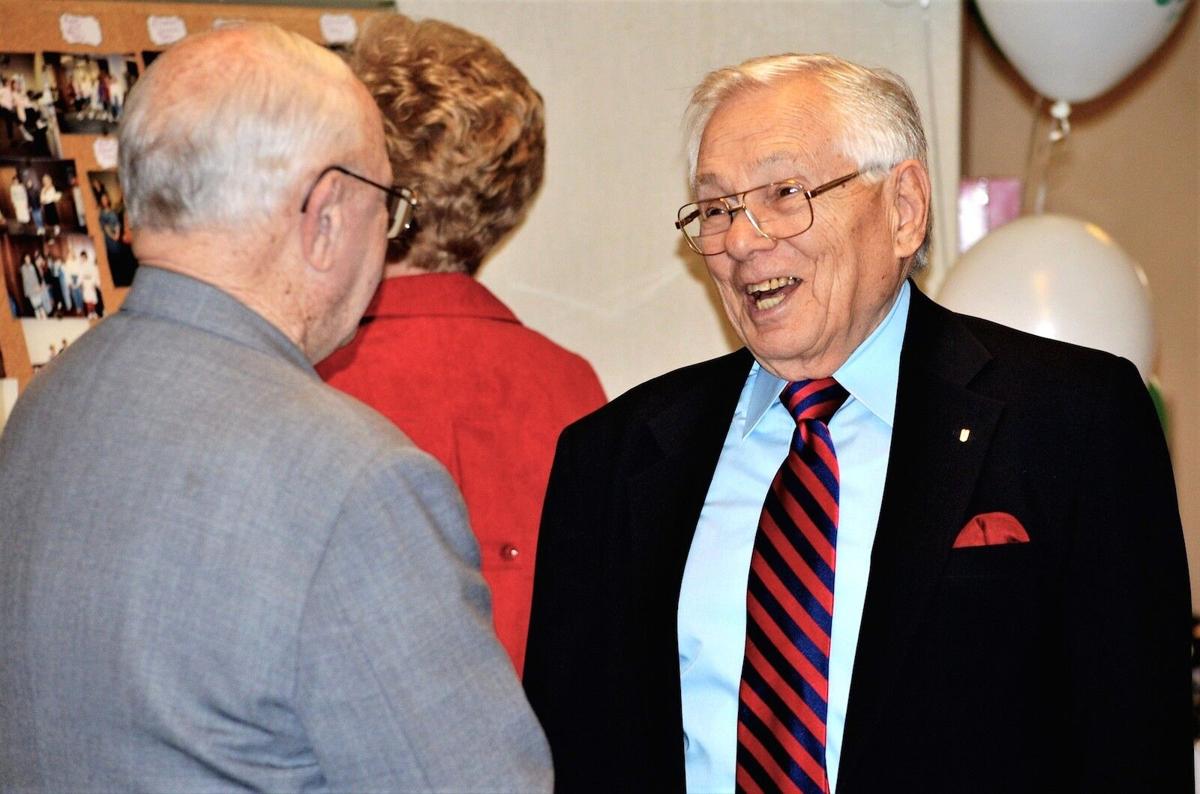 The late Guy Dooley, pictured chatting with a friend, was honored in 2013 on his 50th anniversary of service to United Bank, formerly Montgomery National Bank, and the people of the Upper Kanawha Valley. Dooley passed away on Sept. 12. 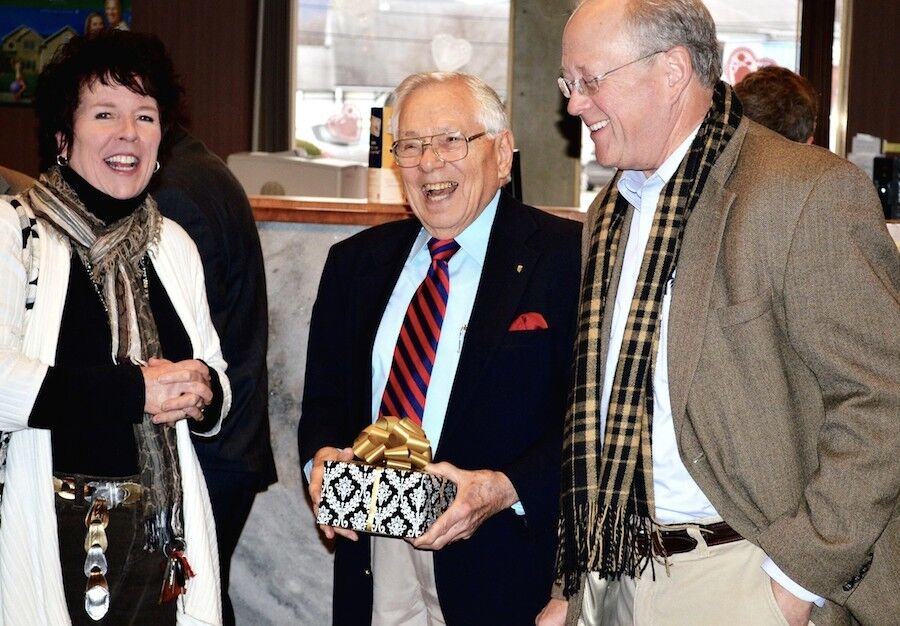 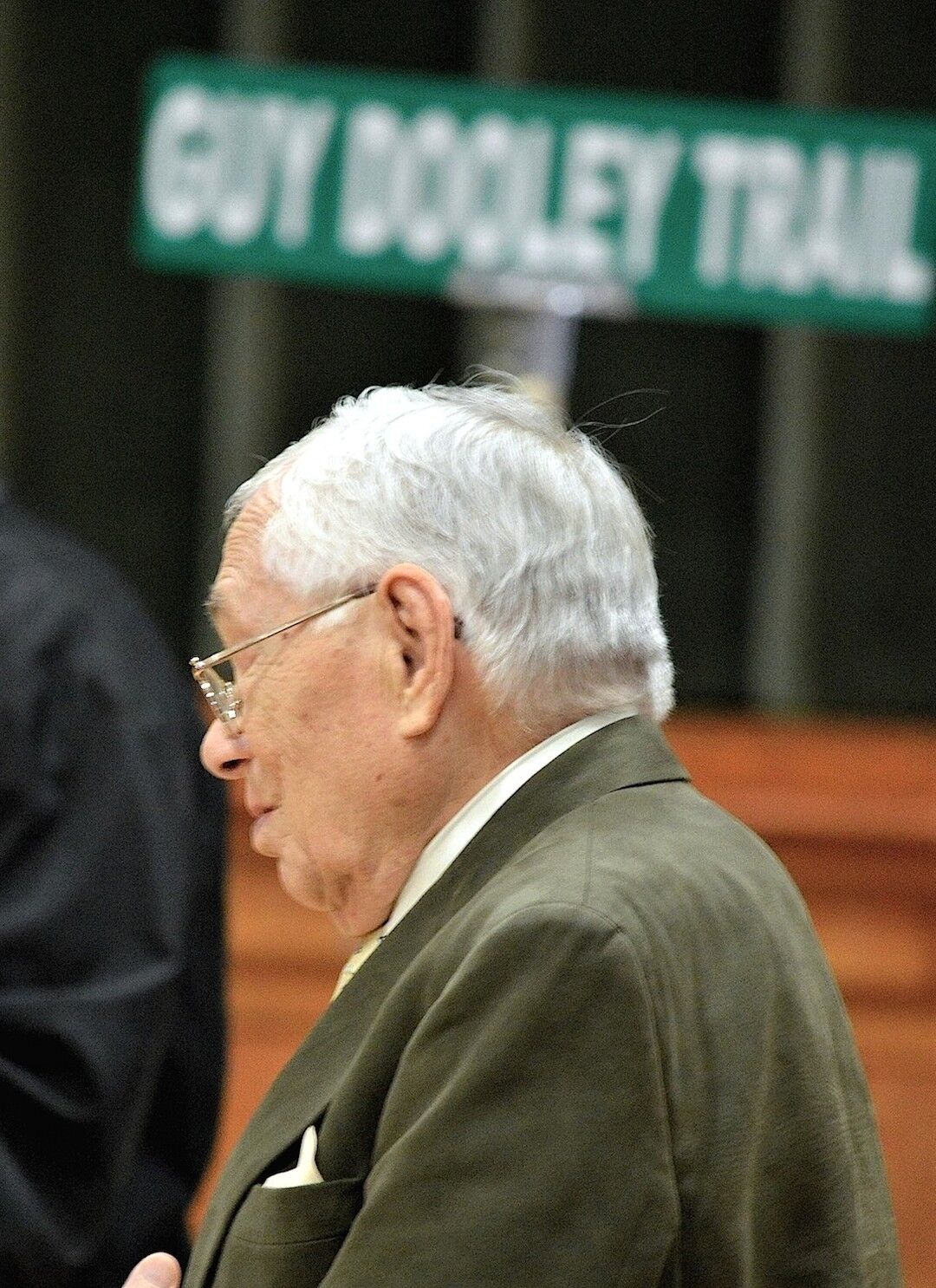 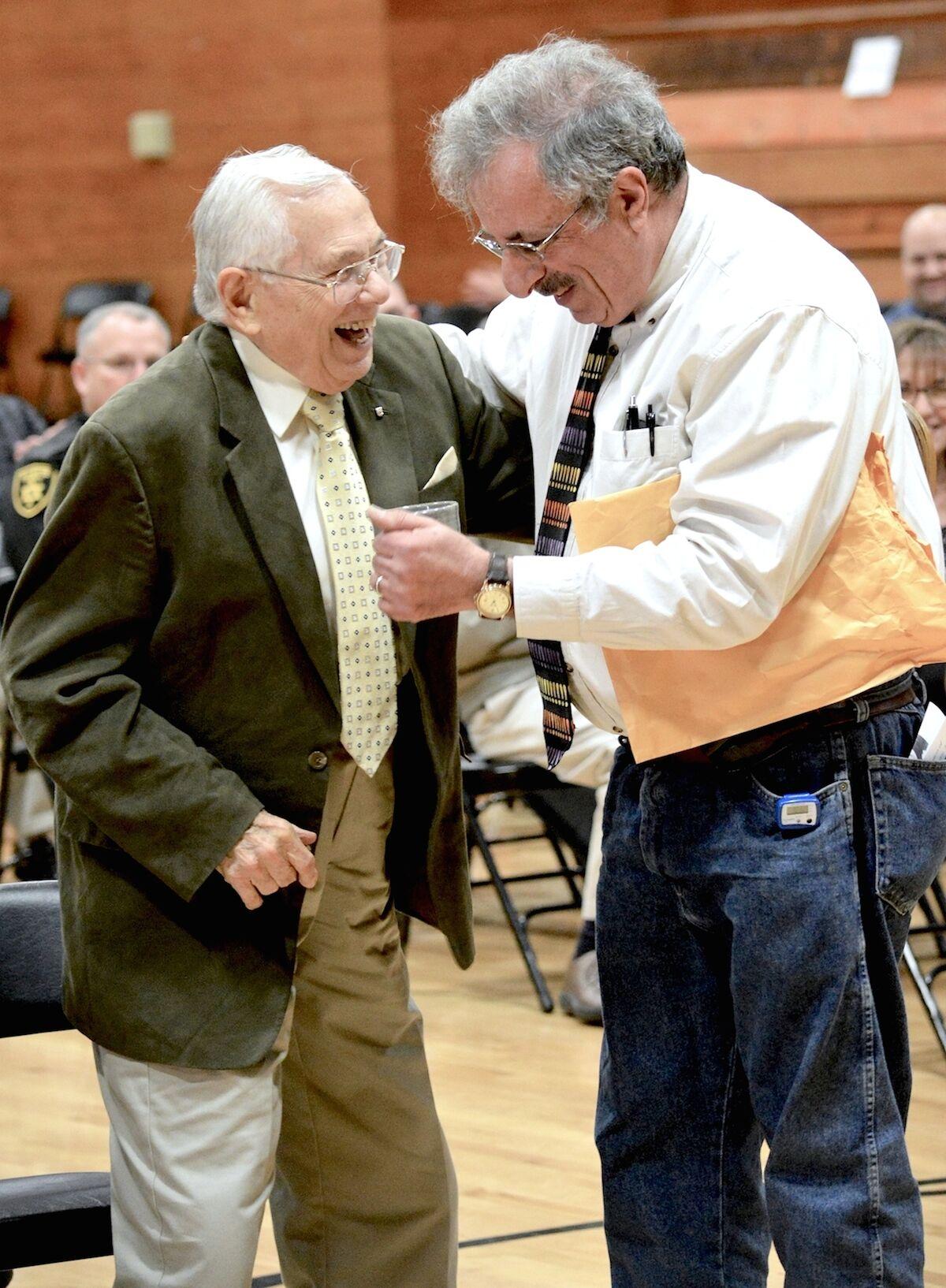 Dr. John David, right, director of the Southern Appalachian Labor School, congratulates Dooley at the 2015 event for his service to the people of Fayette County. 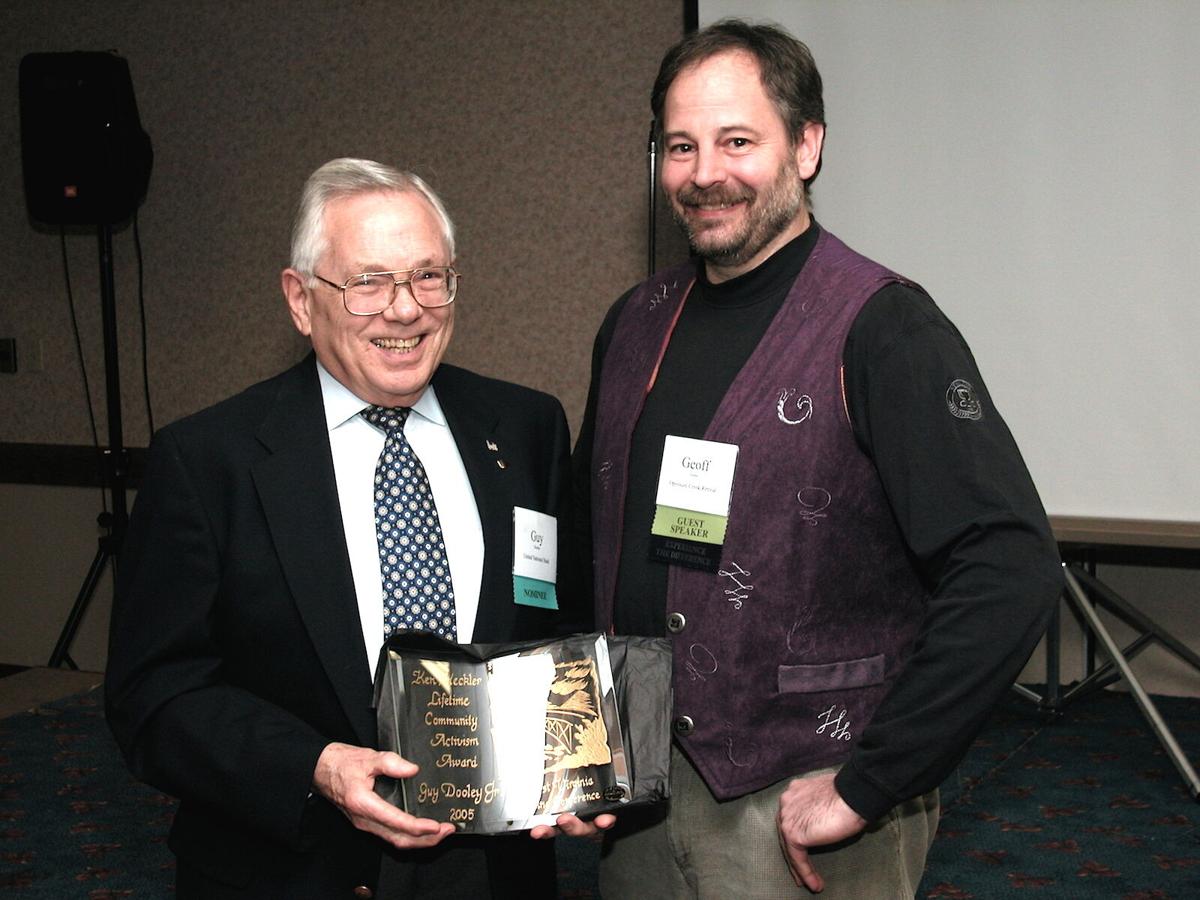 Guy Dooley was presented with the Ken Hechler Lifetime Community Activism Award by Geoff Heeter in 2005.

The late Guy Dooley, pictured chatting with a friend, was honored in 2013 on his 50th anniversary of service to United Bank, formerly Montgomery National Bank, and the people of the Upper Kanawha Valley. Dooley passed away on Sept. 12.

Dr. John David, right, director of the Southern Appalachian Labor School, congratulates Dooley at the 2015 event for his service to the people of Fayette County.

Guy Dooley was presented with the Ken Hechler Lifetime Community Activism Award by Geoff Heeter in 2005.

Fayette County recently said goodbye to a soft-spoken titan of both its business and community life.

Guy Smith Dooley Jr., 96, of Ansted, passed away on Sunday, Sept. 12 at the Avery Place Assisted Living Facility in Winterville, Ga. after an extended illness.

According to his obituary via Lantz Funeral Home, Dooley was born March 8, 1925 in Page. He was the son of the late Guy Smith Dooley Sr. and Gladys Leoda Dorsey Dooley and was a member of a family of four boys and five girls.

A 1943 graduate of Summersville High School, Dooley served in the U.S. Army, being assigned to the 34th Infantry Division, 133rd Regiment, 3rd Battalion, Company L within the 5th Army. He served in the Italian Theatre in 1944 in the Anzio, Rome and Northern Apennines campaigns. On Oct. 2, 1944 — while leading his squad into battle and directing them to places of cover — Dooley detonated an anti-personnel mine, which caused considerable damage to his feet and legs. The following month, Dooley was shipped stateside, where he was treated at Ashford General Hospital (The Greenbrier) in White Sulphur Springs, and discharged from there in July 1945.

For his heroic service, he was awarded the Bronze Star for meritorious service, the Purple Heart with Oak Leaf Cluster and the Combat Infantry Badge.

After his military service, Dooley earned his degree from West Virginia University, graduating in 1949 and embarking on his professional career at Commercial Credit Corporation in Charleston. His banking career began in Montgomery in 1963 after he moved his family to Ansted. While at Montgomery National Bank, Dooley moved up through the ranks before being tapped as bank president on June 30, 1972. In 1978, he was elected chairman of the board and, in 1986, he became president and chairman of the board of the bank’s holding company, Liberty Bancshares. After Montgomery National Bank, he became part of United Bank in 1992, and served as chairman of the advisory board for the Fayette County offices.

Sandy Huddleston, a friend and former colleague of Dooley’s at Montgomery National Bank/United Bank, remembered his dedication to his larger community, first and foremost.

Huddleston pointed to the placement of the Mount Olive Correctional Complex at Mount Olive, as well as the construction of the Upper Kanawha Valley Technology Community Building in Montgomery, as two of the “large accomplishments” in which Dooley had a vital role.

She also mentioned Dooley’s longtime relationship with Dr. Carl Lee Kennedy, Gordon Billheimer and Coach Neal Baisi (known collectively as The Final Four), and the money they raised over the years for scholarships for student-athletes at West Virginia Tech. The collaboration/friendship of the four men “is a story within itself,” said Huddleston.

Huddleston referenced a newspaper article from December 2015, a time when Dooley was recognized for his decades of service to the county, complete with the dedication of Guy Dooley Trail and Fayette County Wall of Honor accolades.

“As I read (the) story again, I picked up on (Dooley’s) comment: ‘I just want to be a part of the community,’” Huddleston said last week. “How true, being that he continued to come to the bank four days a week until age 93, without any specific job assignment, but with the intent of greeting and sharing with others — customers, past and present employees, and friends — and making each one feel special and appreciated. That was just his way.

“Driving from Ansted to Montgomery for 55 years (from 1963 to his official retirement from public service in 2018) speaks volumes for his dedication and commitment. He was everything to all of us, and we will certainly miss him.”

Dooley was presented with a plaque by the Mount Olive Correctional Complex for his many years as chairman of the citizens advisory board. In 2006, he, Kennedy, Billheimer and Baisi were inducted into the WVU Tech Athletic Hall of Fame in recognition of their service to the Tech Athletic Scholarship Fund. In 2015, for Dooley’s unwavering, decades-long support of Fayette County, a trail was named in his honor and his name was added to the Fayette County Wall of Honor.

“When I was first campaigning back in 2000, I had several folks in the Valley ask if I knew Guy Dooley, and if not it was important to meet him as he was the consummate business-civic leader and very well respected among those who live in the Montgomery-Smithers area,” Wender recalled last week. “While I did not know him, I knew who he was, so I made it a point to visit him in Ansted where he lived.

“Not sure how I ventured around to the back of the house, but he was working on the back porch/patio area. He asked me to sit while he continued to work. He had a lot of questions and wanted to know what I thought on a variety of topics. He never indicated if he was going to vote for me, but it was the beginning of a long friendship.”

Dooley was a leader by his actions, Wender stressed. “Guy was well respected by all who knew him. While he was soft-spoken, he did not waste words and said what he meant to say without dancing around the edges. It was obvious there were many who served with him on organizations and committees and it was clear he usually emerged as the opinion leader; others would often wait to see where he came down on a topic at hand.”

The only committee/group in which Wender shared membership with Dooley was the Fayette County Urban Renewal Authority.

“I, too, listened intently to each point he would make on matters that came up,” he said. “I often sought out his opinion and thoughts on items that came before the county commission.

“He was my ally on protecting the viewshed in the New River Gorge, which was not the prevailing point of view by many — both in and outside of county government. Perhaps our payback, in part, is the National Park designation.”

Wender said he was glad the county was able to exhibit its respect for Dooley in 2015.

“It was my distinct honor to suggest we needed some way to permanently show our appreciation for his service, vision and shared wisdom,” said Wender. “I suggested we name the roadway to the boardwalk in Wolf Creek Park after Guy.

“Commission and the URA wholeheartedly agreed and thus the name Guy Dooley Trail. We held a special day for him and invited many folks from across the county to share that day with him, and we gave him the new road sign with his name. He was always the gentleman and ever so gracious in accepting this special honor. Since he moved to Georgia to be cared for by his family, he has been missed. I regret his passing, but like so many feel privileged to have known him.”

Dooley was married for over 50 years to Mrs. Anna Lee Dorsey Dooley, who predeceased him. They were the parents of four children, and grandparents to 17 grandchildren and 18 great grandchildren.

A private graveside service was held at Walker Memorial Cemetery in Summersville on Sept. 25, with interment following under the direction of Lantz Funeral Home.

Donations in Dooley’s honor may be made to Ansted Baptist Church, c/o Pastor Randy Spurgeon, P.O. Box 388, Ansted, WV 25812. Online condolences may be made at lantzfuneralhome.com.