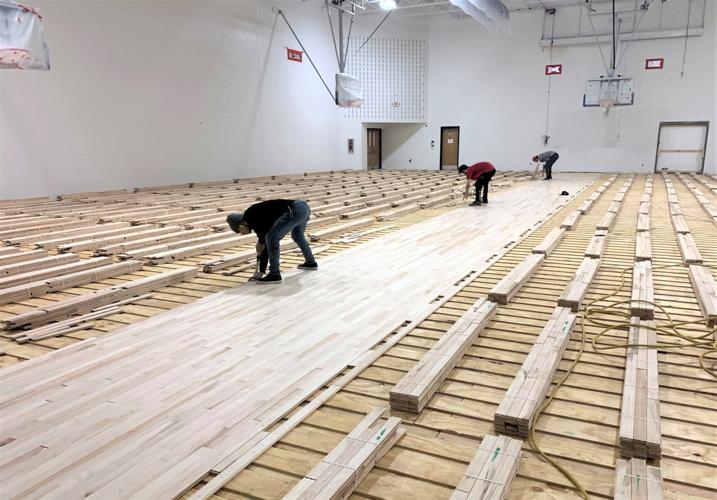 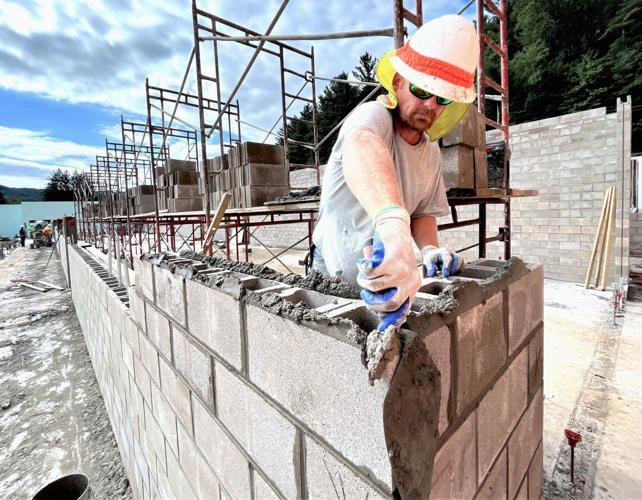 Tim Payton admits work on the Meadow Bridge Regional PK-12 School is somewhat off the intended pace, but that doesn't cause him too much consternation.

Payton, the director of operations for Fayette County Schools, discussed the $25 million project on the final day of classes for 2022 in the county.

"We're a little behind schedule, but we'll be in that (high school portion) building late spring (2023)," he said. "Substantial completion right now is March 31, so we're just trying to decide when to move. We've got testing in the spring and stuff like that, so you don't want to mess that up.

"We're making a decision right now when to move, but it will be sometime after March 31."

He estimated the project is about 12 weeks behind schedule. "It's fine," Payton said. "Mr. Hough (Gary, the FCS superintendent) and I were kind of optimistic (about an earlier finishing date) anyway. We knew that, with weather, it was just going to be an issue, starting construction right before winter. ... Conditions weren't the greatest, but we're OK."

The high school wing, which is Phase 1 of the three-phase project being overseen by contractor Swope Construction, is under roof and is "probably 60 to 65 percent" complete, Payton said.

The project architect is McKinley Architects and Engineers, and Skanska is the construction management company.

The school is being built with a $20,012,448 grant awarded by the School Building Authority of West Virginia in 2019, supplemented by $5 million from Fayette County Schools via a lease purchase program.

The main thrust of the remaining Phase 1 work, which involves building the new high school wing and renovating the newer of the two high school gymnasiums, is "the stuff that's going to go pretty quickly," such as framing, drywall and flooring, according to Payton. "That should go a lot faster than what we've been doing with the insulated concrete forms and getting the walls up and, you know, working on masonry."

With winter now here, provisions such as tenting must be made to allow the masons to complete their block work, he said. "We have to get brick up so we can get windows put in. The HVAC units are also being set."

"We have the road base done, and that's where we're going to stay for a while" until later on in the project, Payton said in regards to a new road to be built on campus.

One of the areas that has been slower than originally envisioned is the gym renovation, Payton admitted. "We're behind on the gym," he said. "We were hoping, hoping (to perhaps be in the gym sometime next month). I still think we'll get a chance to play some basketball games in there this winter."

Basketball teams are currently playing off-campus at such locations as Rainelle Christian Academy and Rainelle Elementary, Payton said, through an agreement with representatives from those entities. Some practice is being held at the older of two high school gyms on the school campus. "We feel like we're in good shape there, but I just really want them to be in that gym. I just really do."

Hold-ups have occurred in the gym electricity work, and "that's just supplies, just getting some of the things you need," said Payton. "They were ordered in plenty of time, but for some reason this world we're living in right now, it's kind of crazy with getting some things you need."

"The switch gears is part of it, but that's not the whole thing," he continued. "Getting the HVAC set up so we have ... permanent heat, permanent AC, permanent air flow ... so we can regulate temperature, regulate humidity. Of course, winter time's a great time to regulate humidity. but that had to be permanent in order for us to get the (gym) floor in. The conditions have to be right for that wooden floor. We could put the floor in under temporary conditions, but in a year you could be looking at some major repairs. That's a huge investment."

He said the sub-floor and gym floor were being installed in recent weeks. Towards the end of that process, graphics must be added, as well as the installment of bleachers and scoreboards and performing finishing touches on the audio visual system. Dressing rooms could be a later project that might not be completed at the same time as the gym floor.

The gym work is being supervised by sub-contractor R.M. Huffman.

As to the scope of the overall project, Payton said, "Everything we need as far as drywall, flooring, metal studs, brick, all that stuff that we need, it's all onsite so all the stuff we need to the end of this thing is there. We're not waiting on that. We are still waiting on some switch gear, though, so we get permanent electrical service. That is scheduled for January. That's kind of the only wrinkle that we're looking at right now."

Phase 2 and 3 have already been bid in a combined scenario. Swope is the apparent low bidder of two firms that submitted bids, although some final paperwork must be completed.

Phase 2 features demolition of the current high school and building the new elementary wing, and Phase 3 will include demolition of the existing elementary school structure and some outlying buildings, as well as site cleanup. "We're hoping to have a finalized contract in January.

"It's a unique situation in that we're still in the building we have to tear down in order to get going, so a lot of it depends on when we can move. Our hope is to be totally in the new building by the fall of 2024. We do have a little bit of luxury in that we're not like we were with Oak Hill Middle School, having students in portable classrooms and things like that."

"Our board has made a commitment to completing this school," he added.

Other FCS building projects in the preliminary stages include renovations to the original gymnasiums at Midland Trail and Oak Hill high schools. Those projects have been bid and contracts were awarded. Court Street Construction, of Fayetteville, will handle the contracts for the gym fixtures and the general trade for both gyms. At Midland Trail, Casto Technical will oversee the HVAC portion of the gym project, and Tri-State Roofing landed the HVAC renovation portion of the Oak Hill gym project.

"We also just bid the complete renovation of the HVAC system at the Fayette Institute of Technology," said Payton. Casto Technical is the apparent low bidder.

Contracts have been awarded for several outdoor classrooms in the county, and that work will start soon.

Additionally, Tri-State Roofing has a contract and will place a new roof on Valley PK-8 this spring, and Valley will eventually have a renovated HVAC system. That will be bid next, according to Payton.

"I'm just excited to get it done, and ready to move on to the next project," Payton said. "Hopefully we can get the Midland Trail Elementary school project (planned merger of Ansted and Divide elementaries in a new building on the Midland Trail Educational Complex) funded. We don't know when that's going to be right now, because there is no funding cycle right now with the SBA."