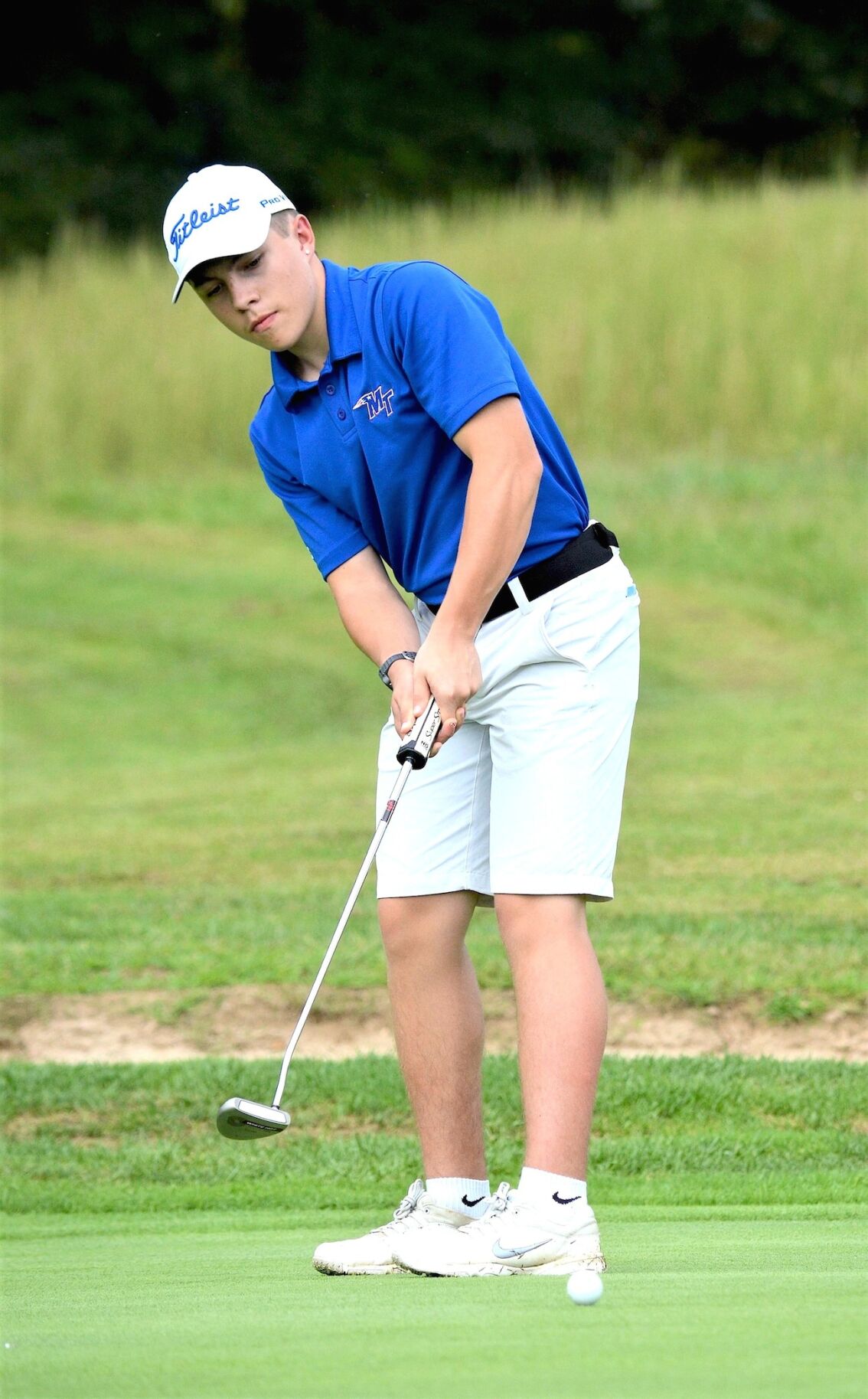 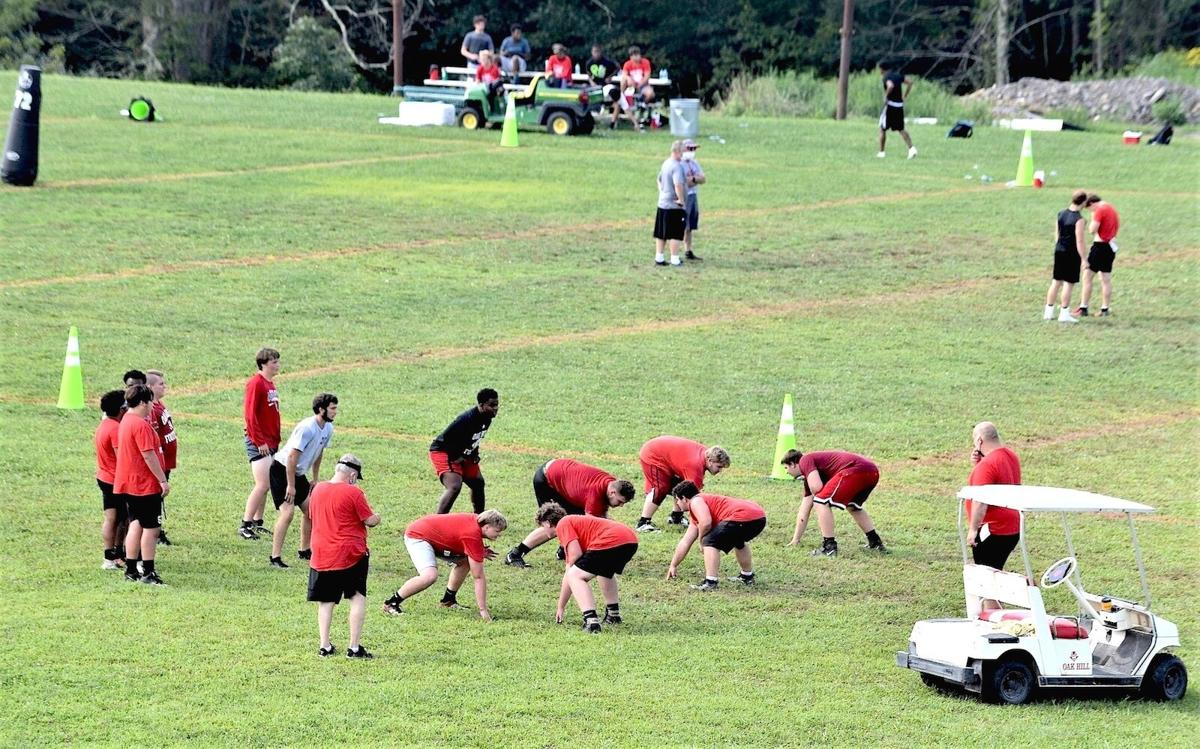 This action occurred at Oak Hill High School football practice on the first day of the fall preseason.

This action occurred at Oak Hill High School football practice on the first day of the fall preseason.

Coaches and athletes statewide welcomed the Covid-19-delayed start of their fall practices on Monday, Aug. 17.

Throughout Fayette County and beyond, various teams went through their tentative first paces this week to prepare for planned upcoming seasons.

As of Thursday morning, Fayette County was listed in the yellow category in a statewide school system alert that features a color-coded map from the West Virginia Department of Education and the state Department of Health and Human Resources, and it indicates the seven-day rolling average of Covid-19 cases per 100,000 population in each county. The colors range from green, which is the best possible scenario, to red, which results in moving all learning to remote and ceasing all extracurricular activities. As of Thursday morning, Fayette had 6.4 cases per 100,000. Logan County, with 51.3 cases per 100,000, was the only county in red.

The Patriots and Red Devils will play 18 holes at Bridge Haven with Greater Beckley Christian and Summers County at 10 a.m. on Friday, Aug. 21.

Midland Trail head coach Jeff Eades welcomes four experienced returnees this fall. And, Eades tells his players they "have a good chance" of advancing to state competition at year's end.

Leading a trio of seniors is Indy Eades, who has "been shooting consistently in the 70s," said coach Eades, who is assisted by David Dehart. The younger Eades worked hard over the summer, but his progress was derailed slightly by an injury suffered in a pickup basketball game.

Fellow seniors Griffen Nickell and Peyton Sheaves have both performed well in the past and will add solid contributions, and sophomore Bo Persinger complements their effort with his own skills.

All four are well-rounded athletes who play several other sports in Hico, as well, their coach points out.

Jeff Eades says he hopes the Patriots can get over the hump this season. "We've come up short at the regionals twice," he said.

As long as the Covid-19 numbers allow and schools remain open, the Patriots are eyeing a busy schedule leading up to regional and state competition. "We've got three or four matches every week. It's just loaded."

"I'm very excited," fifth-year Oak Hill head coach Matthew Sydnor said recently. "This is probably the most excited I've been about a team.

The Covid-19 pandemic hasn't hampered offseason practice for golfers as much as some other athletes, he noted. "It hasn't affected us much. Golfing is outside and they can do the social distancing thing. They've been out playing every day."

Leading the way for the Red Devils, who move into the Class AAA ranks this year, will be junior Jack Hayes. "Jack will definitely be the leading golfer," Sydnor said. "He has improved dramatically over the summer."

First-year player Zane Wolfe, a junior, "came on very strong" in recent months and will be a big boost to the program. Senior Cayden Cox, a three-year team member, has also "improved a lot." Freshman Ian Maynor will be expected to contribute strong performances, and seniors Joel Banks and Kathen Kizer will add to the mix as the Red Devils march on through the campaign.

"We've got only six, but that's a pretty strong team," said Sydnor.

On Aug. 19, Midland Trail opened 2020 by winning a quadrangular match. The Patriots logged a low nine-hole team score of 129, followed by Pocahontas County (130), Summers County (137) and Richwood (145). Trail's Indy Eades was medalist with a round of 36. Pocahontas County's David Gibb followed at 38.

The team breakdown was as follows (top three from each squad counted):

"Bo Persinger (Midland Trail) has tremendously improved from last year," said Patriots' coach Jeff Eades. "David Gibb (Pocahontas), a returning state tournament golfer from last year, is really good and consistent with his iron play. Indy Eades has improved his distance and right now is getting long shots off the tee, which gave him shorter approach shots to the green.

"Pocahontas will be a formidable opponent in the regionals with their one-two punch of Gibb and Mick."

As sports activities get cranked back up, coaches at the high school, junior varsity, middle school and recreational league (adult or youth) levels are urged to submit game results, updated statistics or other information to The Montgomery Herald and The Fayette Tribune.

When turning in scores or statistics, coaches/statisticians are reminded to provide at least the last names of participants; information will not be published with only the first name.

Schedules and rosters for the upcoming fall seasons can also be forwarded.