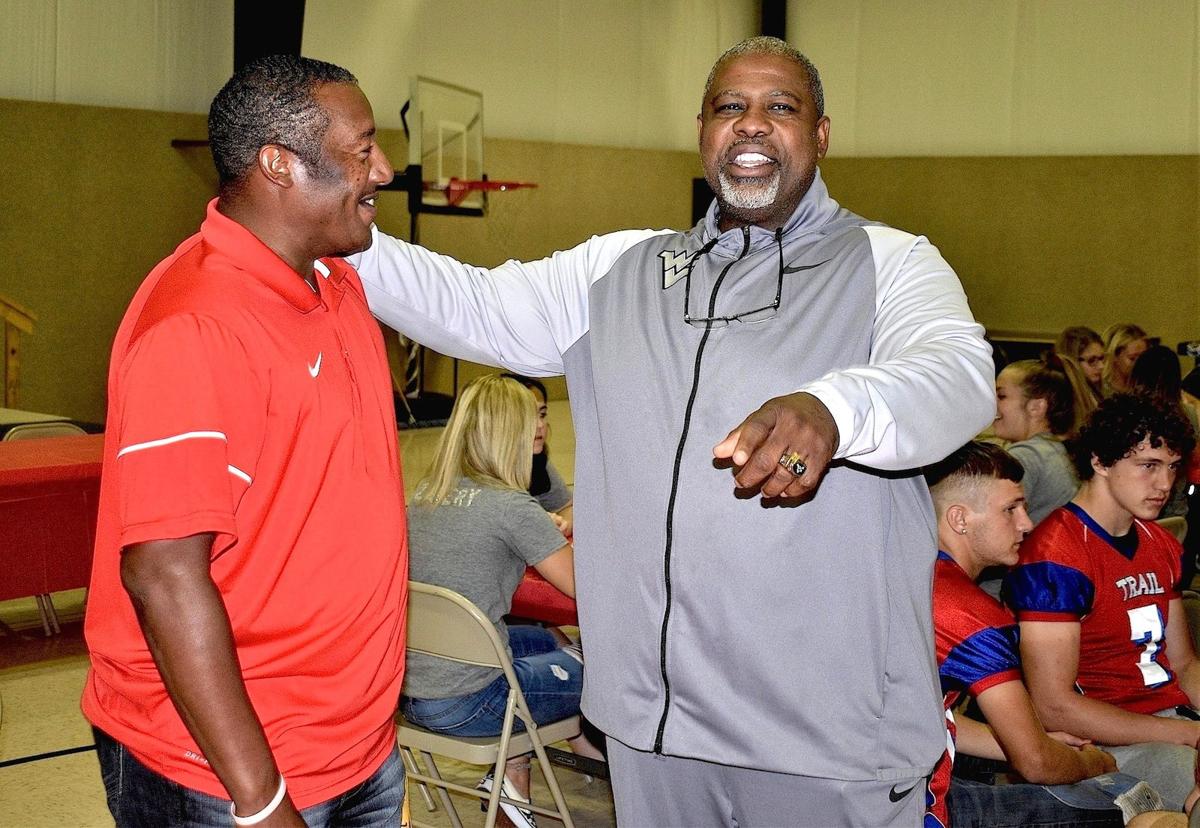 Former WVU All-America linebacker and NFL player Steve Grant, right, spoke at Grace Baptist Church in Fayetteville last Thursday as part of a Fellowship of Christian Athletes banquet involving students and coaches from Midland Trail and Oak Hill high schools. Prior to the dinner and his remarks, Grant was able to catch up with a former Mountaineer teammate, Tim Newsom, an ex-Mount Hope all-stater who has helped coach the Oak Hill Red Devils in recent years. 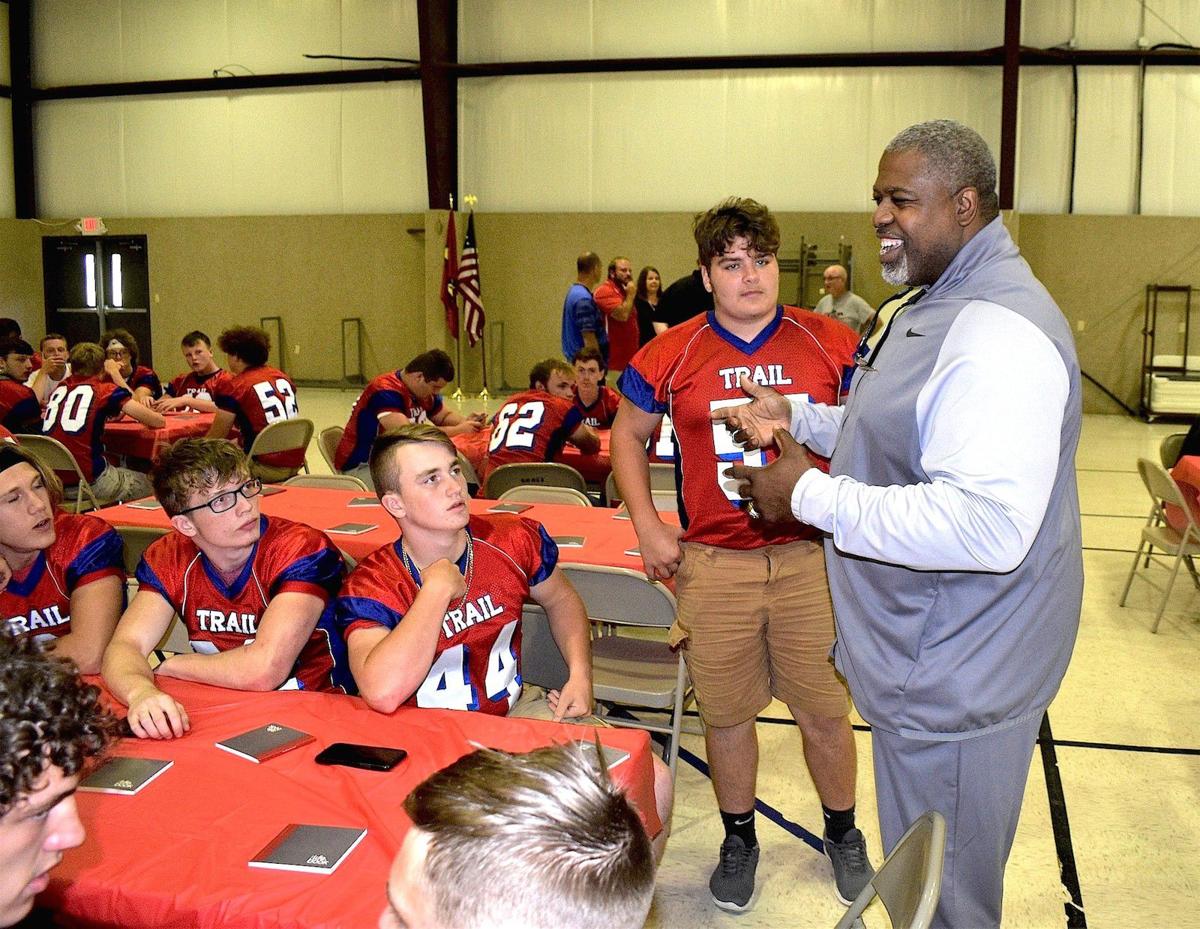 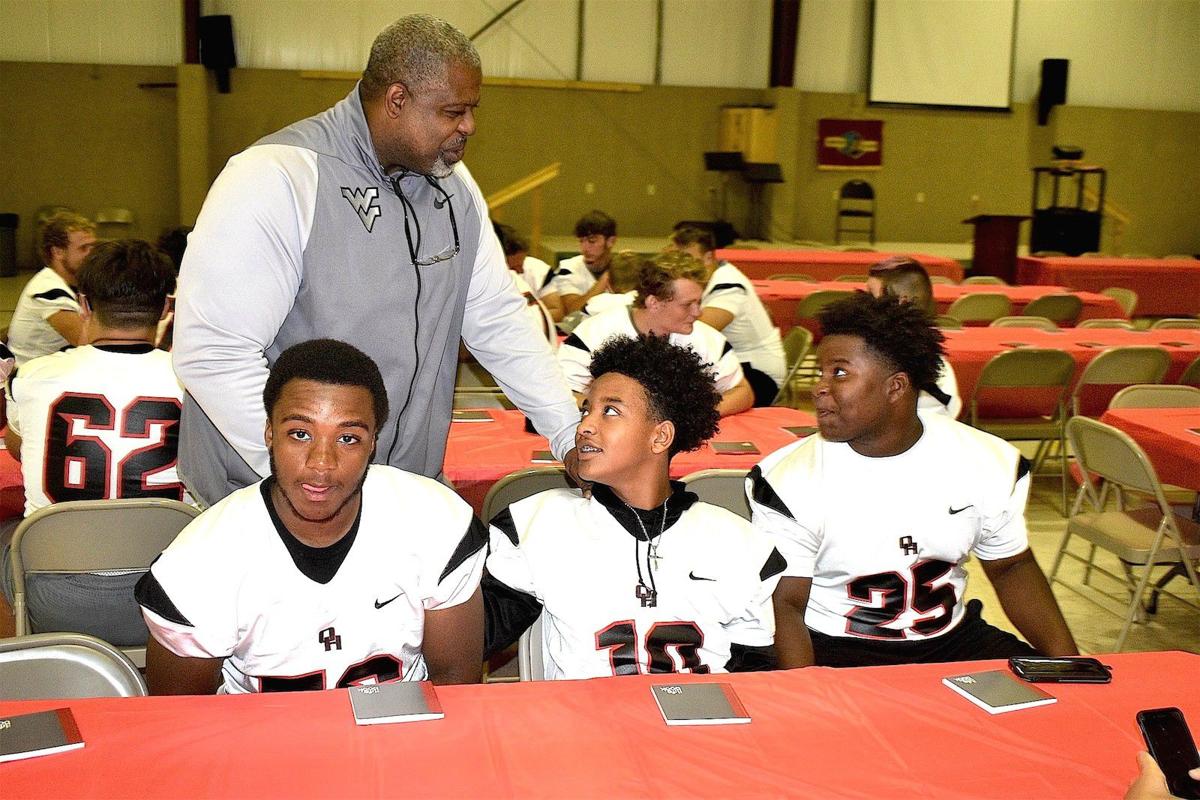 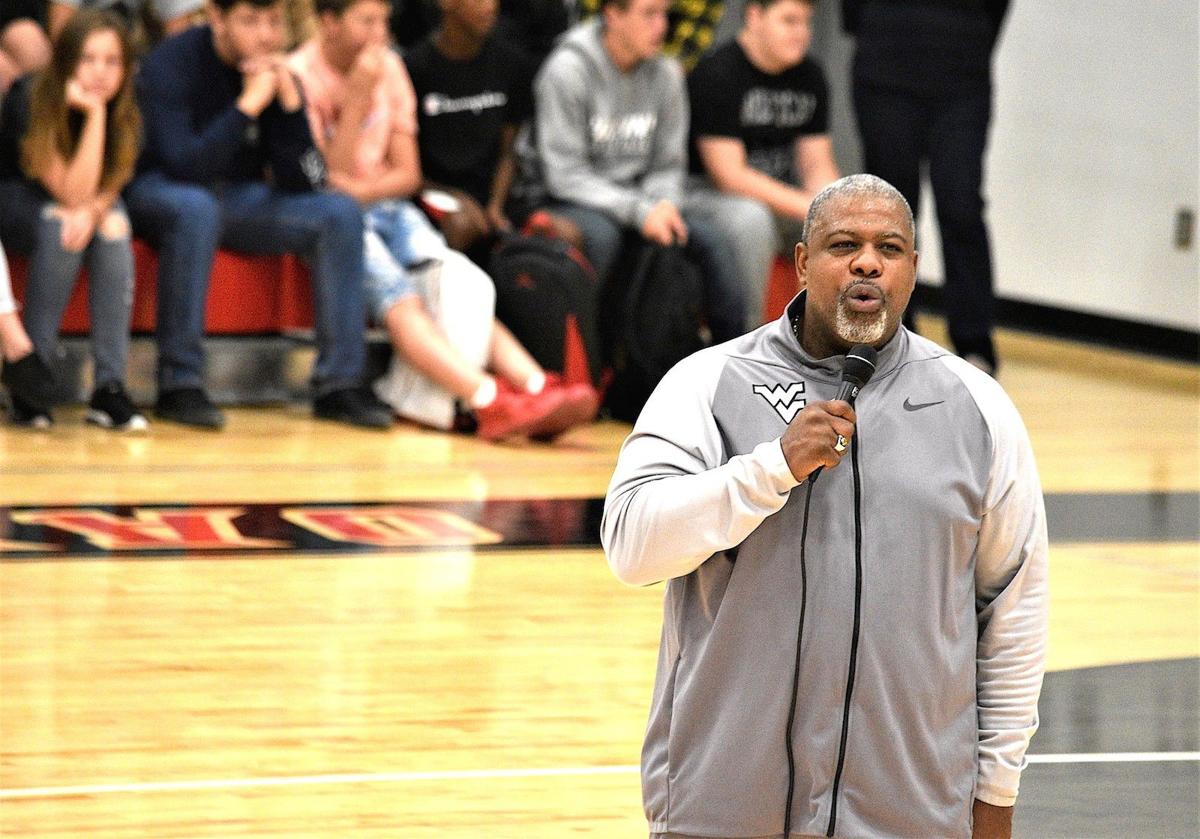 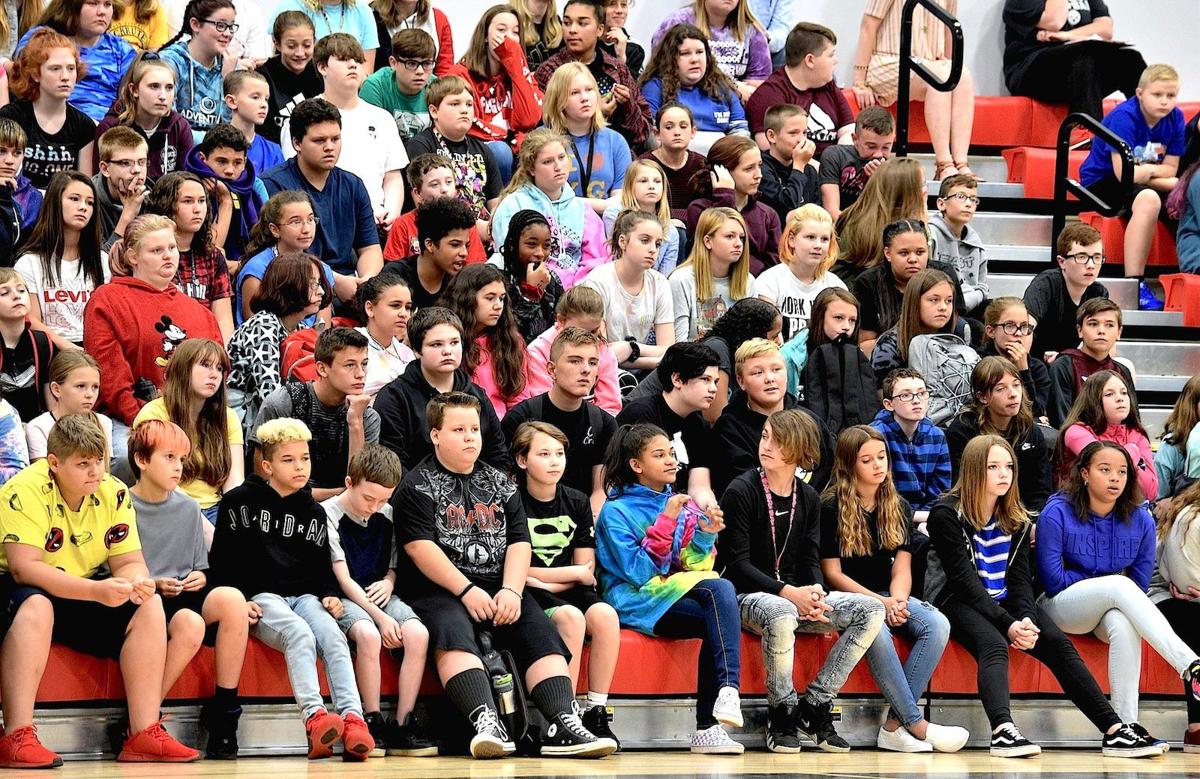 Former WVU All-America linebacker and NFL player Steve Grant, right, spoke at Grace Baptist Church in Fayetteville last Thursday as part of a Fellowship of Christian Athletes banquet involving students and coaches from Midland Trail and Oak Hill high schools. Prior to the dinner and his remarks, Grant was able to catch up with a former Mountaineer teammate, Tim Newsom, an ex-Mount Hope all-stater who has helped coach the Oak Hill Red Devils in recent years.

Since his collegiate days in the late 1980s and early 1990s, the Fellowship of Christian Athletes has played a big part in the life of former WVU Mountaineer All-America linebacker and Indianapolis Colts and Tampa Bay Buccaneers player Steve Grant.

Speaking before a special FCA banquet for Midland Trail and Oak Hill high school athletes Thursday at Grace Baptist Church in Fayetteville, Grant said he was introduced to the Fellowship of Christian Athletes on campus in Morgantown. Around that time, he was introduced to Mike White, now the South Central WV multi-area director for FCA. “That’s when I got heavily involved,” said Grant. White accompanied Grant on his visit to Fayette County last week.

More recently, Grant was hired by the FCA as the chaplain at Texas Tech University. At Texas Tech, he worked with current WVU head football coach Neal Brown, who was then an assistant under head coach Tommy Tuberville.

Part of Grant’s personal story is shared on the back of a promotional sports trading card he distributes during his travels.

“I stumbled through life wondering who I was; trying to find answers in power, position, wealth, possessions and women, only to realize the more I sought these things, the emptier I felt,” Grant’s personal message reads. “When I accepted Christ as my Lord and Savior, life was no longer meaningless.

“I understood that God had a purpose for my life and I was significant.”

Prior to his remarks Thursday, Grant indicated plans to stress several key points.

“Whatever you want to be, dream big about it, and don’t limit your dreams,” was one of his first topics. Individuals should “focus in on vision, imagination, that creative energy” that would help them be successful.

He also stresses maintaining productive relationships. “When I was growing up, my mom would always tell me how important relationships were,” said Grant, who now lives in Dallas. “I was young, I was hard-headed and I didn’t listen to her.

“But I found out having bad relationships gets you in a lot of trouble.”

Proper relationships “facilitate the pathway to your success,” he said. “You’re the average of the five most influential people in your life.

“Character and integrity,” he said. “Your word has to mean something.”

“(Former Tampa Bay Buccaneers and Indianapolis Colts head coach) Coach (Tony) Dungy told me, ‘Talent is overrated. You win with character. Because character will ask you to do the little things well all the time.’”

As a final word of advice prior to the dinner, he said, “As a coach, as a parent, always stress the importance of listening. Listening is a lost art. ... The more we listen, we can catch more.

“We live in a society were everyone else is speaking, but we’re not truly listening.”

Relating to a younger generation, he said most students still want guidance. “No matter what, kids want discipline, and they want the truth,” said Grant.

Finally, a maxim he lived by, especially when coaching, was centered on making the right choices. “You’re never wrong by doing what’s right.”

“When I organized this, I wanted to bring the two teams together and I really wanted to have it at a church in Fayetteville,” said Bret Floyd, an FCA huddle coach who organized the Thursday event. “Fellowship of Christian Athletes has played a major part of my life, and I wanted the players to hear from a professional athlete who has been successful.

“I knew Steve Grant was a dynamic speaker who would speak directly to the hearts of the student-athletes and challenge them to be their very best and make good decisions and choices in life. Steve was amazing last night and each student held on to every word he said. That was evident by the standing ovation he received. Steve will tell you, however, the credit all goes to God and nothing he has said or done.”

Grant then met with Oak Hill Middle School students and staff Friday morning. Later Friday, he took part in the pregame for the Oak Hill-Midland Trail football game, then he delivered a message at a 5th Quarter event at Grace Baptist following the contest.