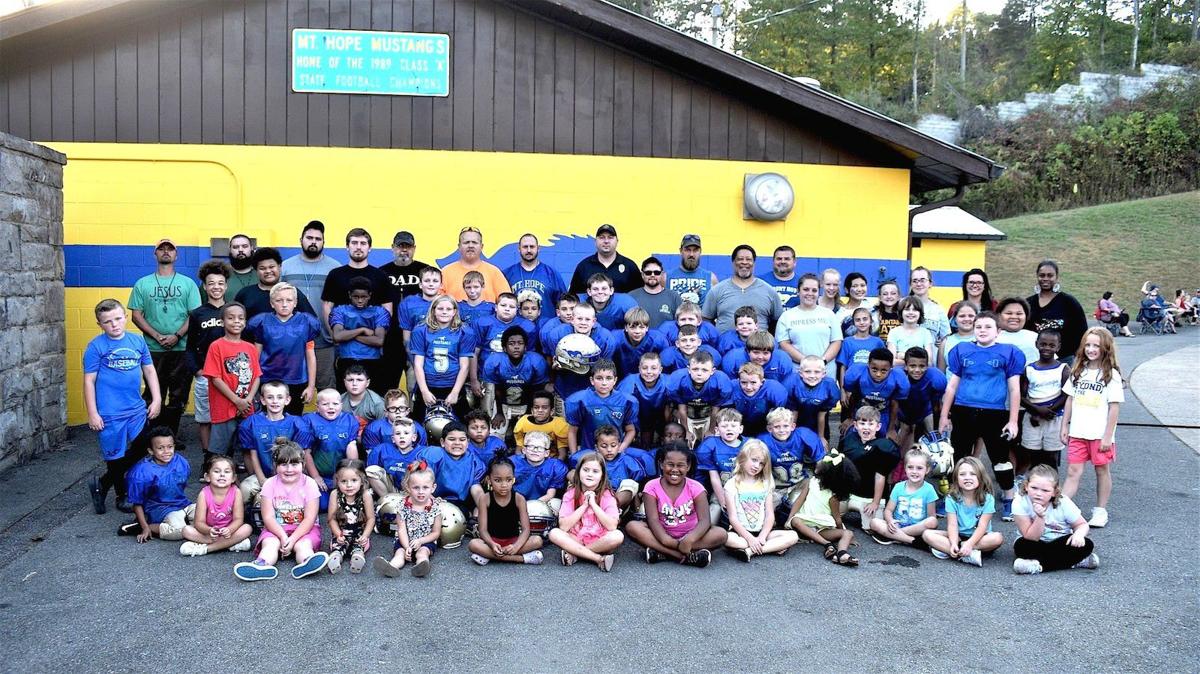 Many coaches, players and cheerleaders gather before a recent practice of the Mount Hope Youth Football League. Besides improving their game, those present wanted to recognize representatives of the Fayetteville Lowe's for their Lowe's Heroes project, which made improvements to Mount Hope Municipal Stadium. 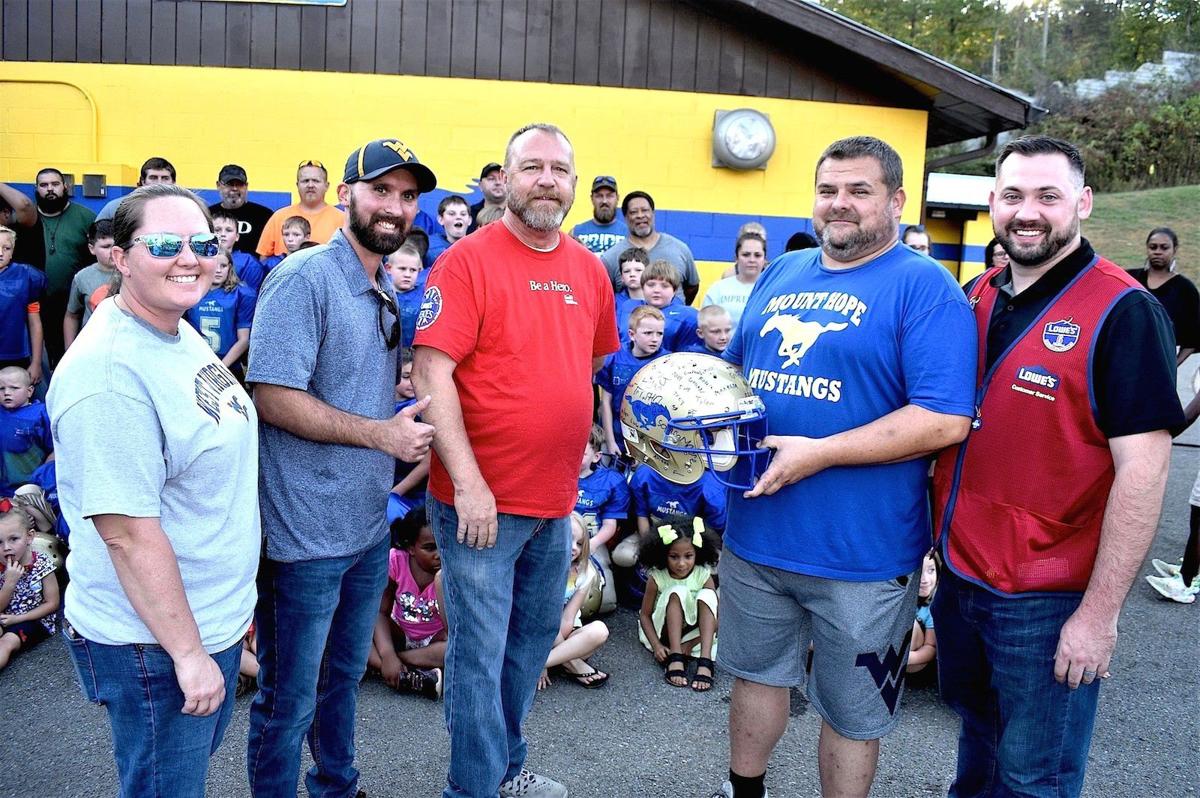 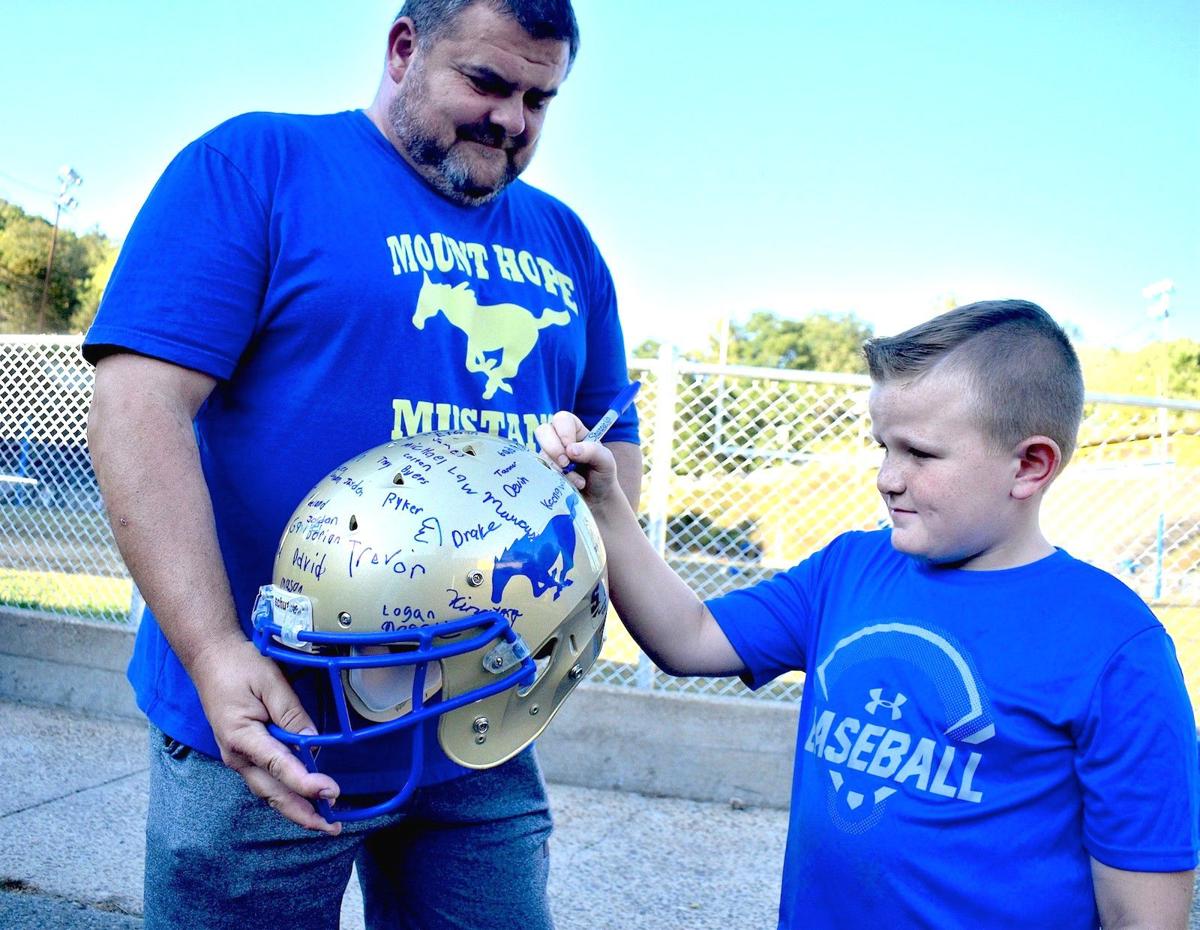 Caiden Morris was among those signing the helmet last week.

Many coaches, players and cheerleaders gather before a recent practice of the Mount Hope Youth Football League. Besides improving their game, those present wanted to recognize representatives of the Fayetteville Lowe's for their Lowe's Heroes project, which made improvements to Mount Hope Municipal Stadium.

Caiden Morris was among those signing the helmet last week.

MOUNT HOPE — The Mount Hope Youth Football League returned the favor to some of its heroes last week.

During a brief ceremony last Thursday before practice, league coaches, players and cheerleaders presented Lowe's representatives with a signed Mount Hope helmet and a chorus of thank yous for helping spruce up Mount Hope Municipal Stadium.

"Mount Hope Youth Football League was started by Dave Snyder about six years ago," said Jerry Long, one of the league's coaches. "He was an alumni of Mount Hope.

Lowe's Heroes, with this project featuring representatives of the Lowe's Fayetteville location, recently provided a week of service, as well as donations, to help shore up the league's home site, Spadaro Field at Municipal Stadium.

Lowe's Heroes is a company-wide program which gives employees the opportunity to support local community improvement projects and make a lasting impact, according to the company website.

According to Long, the Lowe's crew completed such labor as painting, power washing of the stadium's exterior and interior bricks, and plumbing work, in addition to supplying a refrigerator, two deep freezes and a microwave for a concession stand, garbage bags and cleaning supplies.

The stadium's biggest fence was "rusted and terrible," and the Lowe's folks "got fence-specific spray paint and painted the entire fence," said Long.

"We were extremely happy to have the opportunity for those guys to come in," he stressed. "We can't thank them enough."

For yearly Lowe's Heroes projects, "We're asked to select a project within our communities, where we feel like the community could benefit from some volunteer hours, donation of product" and a "wide array" of services, said Mike Dorsey, store manager of the Fayetteville Lowe's.

According to Dorsey, Mike Aurednik, a Lowe's community sales professional, attended school in Mount Hope and explained that a need existed in Mount Hope. So, the decision was made to steer the local project toward the Mount Hope league.

Lowe's and its associates donated around $2,500 in labor — some in a paid-time scenario and some on a volunteer basis — and materials toward refurbishing the stadium.

"It's been a big success, nice job by our team," said Dorsey.

"This stadium is really special to the community; it is kind of that identity for Mount Hope," Long said.

He said the league receives assistance from individuals in the community such as former NFL standout Lonnie Warwick, who is "a great supporter of the program. Anything we've needed, he's always been there for us to help us out."

Also, children of many former MHHS alumni are currently coming through the program.

Mount Hope competes in all four divisions (JV C, C, B and A) and cheerleaders in the Southwest Virginia Youth Football League, which also includes programs from Raleigh, Mercer and Boone counties. The league has taken good strides in recent years, Long said. "We started with a few kids, and each year it's grown and grown and grown. Now, we're well over 100 kids with football and cheerleading."

Participation in the league "gives them a sense of community for Mount Hope, and we also try to instill all the positives that athletics brings, (including) sportsmanship and self-reliance," he said. "We want to make sure the kids have fun, that they're safe and that we compete at a high level.

"We're in a world of 'everybody gets to play,' and we try to assure that all the kids get to play, but we also want them to understand there are losses in life."

This project, though, had 'winner' written all over it.