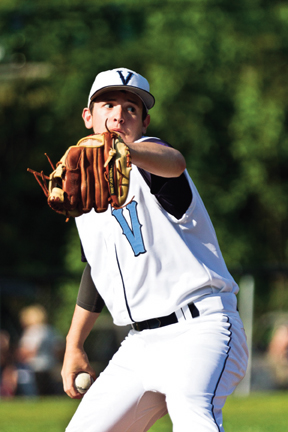 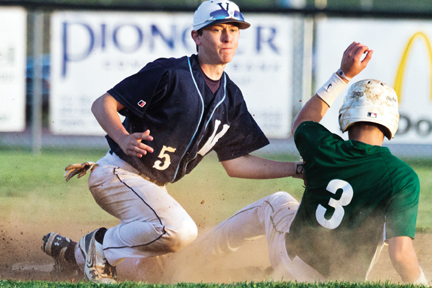 Tyler Chaffins makes a play at second base earlier in the season. He and his Valley Greyhounds teammates will tangle with East Hardy at 5 p.m. Friday, June 1 in the semifinals of the Class A state baseball tournament.

Tyler Chaffins makes a play at second base earlier in the season. He and his Valley Greyhounds teammates will tangle with East Hardy at 5 p.m. Friday, June 1 in the semifinals of the Class A state baseball tournament.

After a nightmarish seventh inning in last year’s state baseball tournament loss, the Valley Greyhounds feel they have some unfinished business to which to attend.

“Not to sound arrogant, but there is (unfinished business),” said Valley coach Joe Craffey, whose team was done in by an eight-run seventh en route to suffering a 10-2 setback to eventual champ Wheeling Central on the tourney’s first day in 2011. “I’m not one about going and getting somewhere.

Weather permitting, Valley (25-9) will tangle with East Hardy (30-6) at 5 p.m. this Friday, June 1 in the opening day of the Class A state tournament at Appalachian Power Park in Charleston. In The Charleston Gazette’s final statewide single-A ratings, East Hardy is No. 1 and Valley No. 4. The No. 2 team, Charleston Catholic (28-8), will face the No. 3 squad, Madonna (23-9), in the other semifinal matchup following the Valley-East Hardy tilt.

The championship game is set for approximately 4:30 p.m. Saturday.

“Heck, yeah, we’re happy to be there, but let’s do something when we get there,” Craffey continued. “Last year, the experience through six innings was a pretty good experience, then we kind of wilted under the pressure. This year, they’re a little bit more mature. We’ve reiterated what we’ve said all year about playing the whole game. Our focus has been more on completing what we start.”

“They’re pretty good,” he says of the Cougars. “We haven’t seen them, but from all reports, they’ve got two pretty good pitchers, they put the ball in play, … they pretty much do it all.”

Barring a major shift, the Greyhounds will throw junior Arik McGinnis against the Cougars. McGinnis is 6-2 with a 2.18 ERA and 72 strikeouts.

“I gotta go with my best,” Craffey said. “We gotta win the first one to worry about the second one.”

At the plate, McGinnis has a .397 batting average with seven doubles, a pair of homers and 40 RBIs.

East Hardy, which set a school record for wins in a season, advanced to Charleston with an 8-2 win over Notre Dame Thursday in the Region 2 title game.

After a three-game losing streak (Moorefield, Musselman and Berkeley Springs), the Cougars have reeled off wins in 14 of their last 16 games.

“We had a real good season,” said veteran coach Raymond Snapp. “Of the six losses, we had a chance to win five.

East Hardy last advanced to the state tournament in 2010, losing a lead in the seventh inning and eventually falling in eight innings to Madonna on the opening day. “Most definitely, the kids are excited to get back (to Charleston).”

Of Valley, Snapp admits he knows little. “The one thing I know is that they’ve got to be a pretty good ball club,” he said, pointing to this year’s record and the fact that Valley is in the tourney field for the second straight year. “They will be a tough, tough opponent.”

The Cougars rely on the performance of two key pitchers — lefty Jamie Miller (9-1) and right-hander Tyler Mongold (7-3). “Both have been pretty steady for us all year long.”

Among top hitters are Korey and Kollin Foltz. “They kind of lead us,” Snapp said.

“I’ve been in this thing a long time (35 years),” he added, “and it’s always exciting to go to the state tournament.”