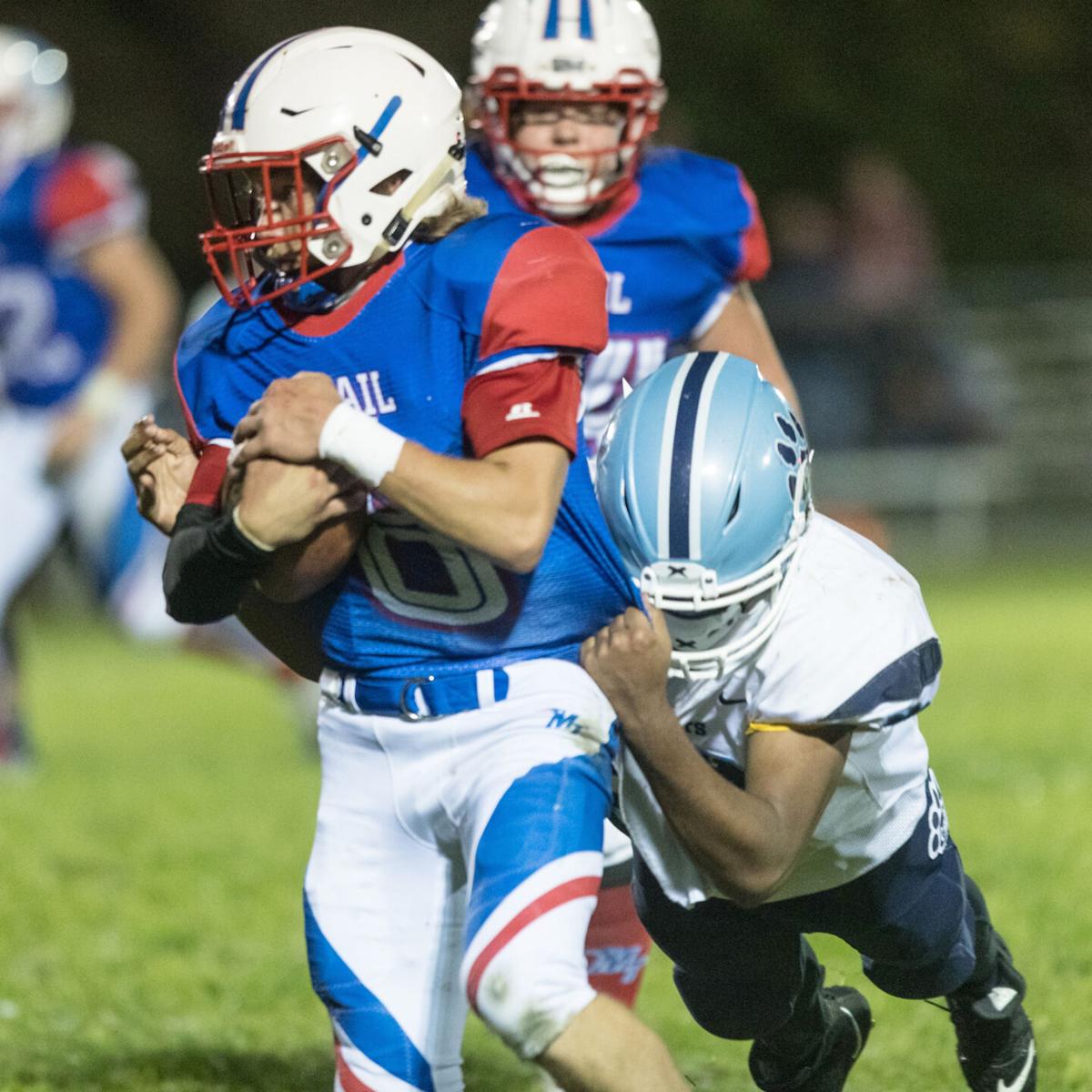 Robert Ruffner, the ball carrier for Midland Trail, is brought down from behind by Meadow Bridge's Caidan Connor. 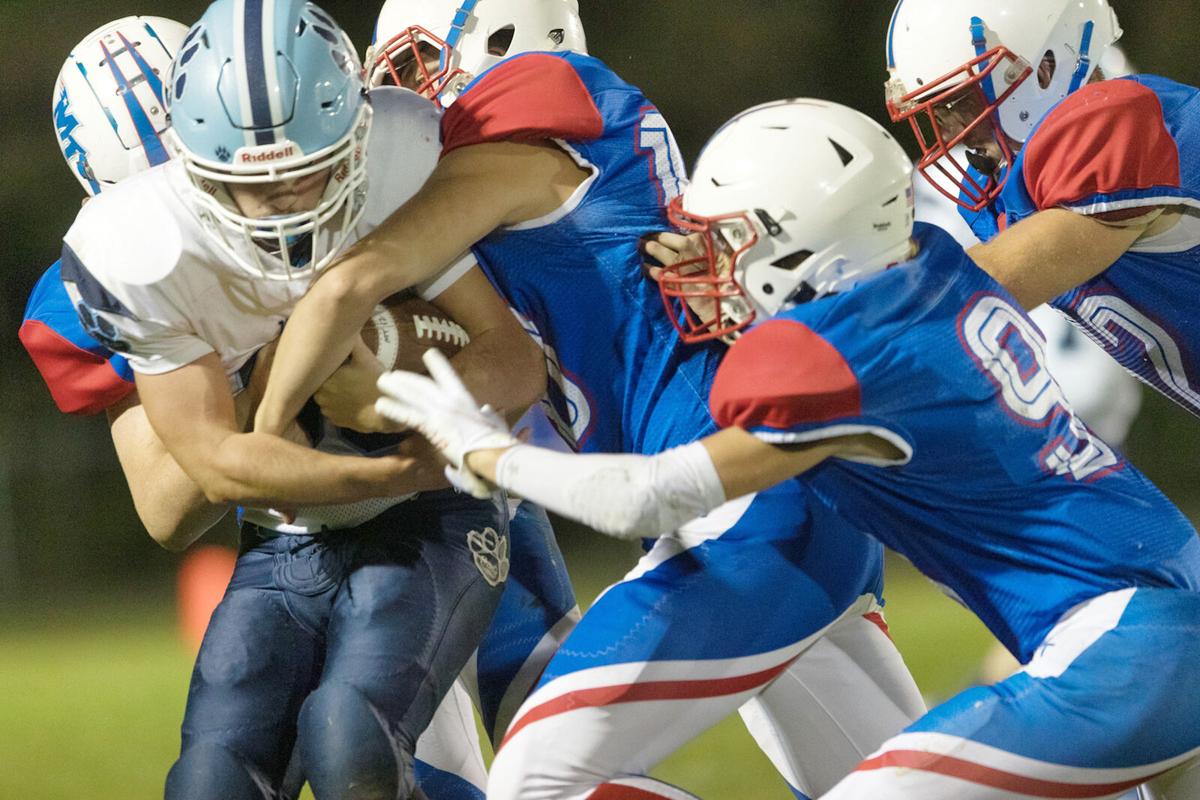 Meadow Bridge quarterback Dustin Adkins is brought down by Cody Harrell and a host of other Midland Trail defenders.

Robert Ruffner, the ball carrier for Midland Trail, is brought down from behind by Meadow Bridge's Caidan Connor.

Meadow Bridge quarterback Dustin Adkins is brought down by Cody Harrell and a host of other Midland Trail defenders.

HICO — A more precise Midland Trail offense can be a dangerous one.

Combine that with a stout defensive effort, and the Patriots came away with a 33-0 shutout of rival Meadow Bridge on Friday on Roger Eades Field at Patriot Stadium.

The Patriots drew first blood on the initial play of the second quarter on a 16-yard end-around to the end zone by Ayden Simms in a third-and-10 situation, and Talon Shockey's PAT kick made it 7-0 with 11:52 to go until halftime.

Still-learning Midland Trail senior quarterback Josh Dickerson had a three-touchdown passing night for the second straight week, connecting with Simms on scoring plays covering 40 and 20 yards and teaming up with Robert Ruffner on a 29-yard TD pass on a ball that was tipped by Meadow Bridge defender Rian Cooper before Ruffner cradled it in the end zone.

Dickerson wound up completing 7 of 9 passes for 147 yards and three scores, and he was intercepted once by Meadow Bridge's Levi Lester.

While damaging the Wildcats through the air, Midland Trail also revived a strong running attack as the game progressed. Ruffner sprinted his way to 111 yards on 17 carries, and the final Patriot score came on a 13-yard Aden Isaacs run with 8:42 remaining in the contest, concluding a drive that featured several strong Isaacs carries.

Simms said he and his teammates have buckled down in practice recently to make up for some early season missteps. "We were weak in a few spots, but we went at it in practice last week and this week and got it down and got things right," he said.

"Our defense was on it today," added Simms, who had an interception for the Patriots' lone takeaway on the evening. "And offensively, Robert Ruffner is a weapon, and Aden (Isaacs) is a weapon. And we've been throwing the ball a lot, which is a little different than we're used to, but it seems to be working and hopefully we keep that going."

Midland Trail head coach Frank Isaacs was pleased with the solid improvement he saw from his charges. "We had fewer negative plays," said Isaacs. "We didn't have those snap issues. We looked a whole lot better.

"The first two series of the second half, we actually looked like Midland Trail football again. We started running the ball a little bit. It felt like Midland Trail again. It's like we're trying to figure out who we are and how to play, and we finally found ourselves. We've got the backs and we've got the wide receivers, and I keep telling people we're going to be as good as Josh and the offensive line improve."

On the other side of the ball, Trail's prevent unit limited the Wildcats to 62 yards in the first half, but the visitors were in the negative in the second half and wound up with 29 total offensive yards on the night.

"And how about that defense?" asked Isaacs. "Meadow Bridge is not a bad football team, but our defense is pretty daggone legit right now."

The visitors struggled to establish much of an offensive rhythm all night but still maintained contact early, as the first quarter was played to a 0-0 standstill. Due to MBHS being in remote learning due to Covid-19 for several days, the Wildcats hadn't played since a 26-14 conquest of Van on the Aug. 27 opening night. They practiced some this week after returning from remote learning, which allows no practice or games or other sports preparation.

"We were worried about that all week," said Meadow Bridge head coach Dwayne Reichard. "They (Trail) had an extra week worth of preparation last week and got to play on Friday night. And, actually they got to practice Monday and we were still sitting at home.

"We knew conditioning and just sharpness was going to come into play, and we felt like we played fairly decent in the first half. We gave up a couple big plays ad gave up a couple scores, but we felt good about where we were at. I think the legs got a little tired in the second half and they blew it open there."

"I'll be honest with you, the daggone quarantine policy, I think, killed us," Reichard continued. "There at Meadow Bridge, it wasn't a football player that was affected. It was the student body. I don't know what the number of positive cases were. Don't get me wrong, it's a dangerous situation, but when it branched out and contact trace everyone, next thing you know we're above the threshold ... and they (county school officials) shut us down.

"Realistically, we feel like it punished our student-athletes (having to sit with no practice for several days and missing a game after gaining momentum with the season-opening win). It's a flawed system. I think where we went is a better deal (more recent changes in contact tracing and mask requirements). I think that makes a little more sense, but it was a week too late for us.

"Conditioning and mental sharpness really came into play in the second half, and they were able to capitalize and run away with it. Congrats to them."

Isaacs says he's continually impressed with the progress Dickerson has made behind center after he took up the game again for the first time since sixth grade.

On the 40-yard TD toss to Simms that — coupled with Shockey's PAT — made it 20-0 with 3:11 left in the third quarter, Dickerson stepped up in the pocket and fired a nicely-thrown spiral that Simms collected in stride for the score. "That wasn't supposed to go to him (Simms)," Isaacs explained. "We were supposed to hit the out, and he (Dickerson) noticed the corner bit down on it and the safety came up and he just threw over top. It was a perfect read. Coach (Curtis) Miller screamed, 'He's getting it, he's finally getting it.' "

Of a key 13-yard Dickerson quarterback keeper which kept that drive alive, Isaacs said, "I didn't call the QB keeper. He kept it himself and got a 10- or 12-yard run. That shows progression; that shows he's learning the football game. It's a testament to how much he's working and how much his teammates are helping him."

Midland Trail (2-1) was scheduled for a Sept. 17 game at Richwood, but that contest has been moved to Oct. 22. The Patriots will have a bye week next week before playing at Summers County on Sept. 24.