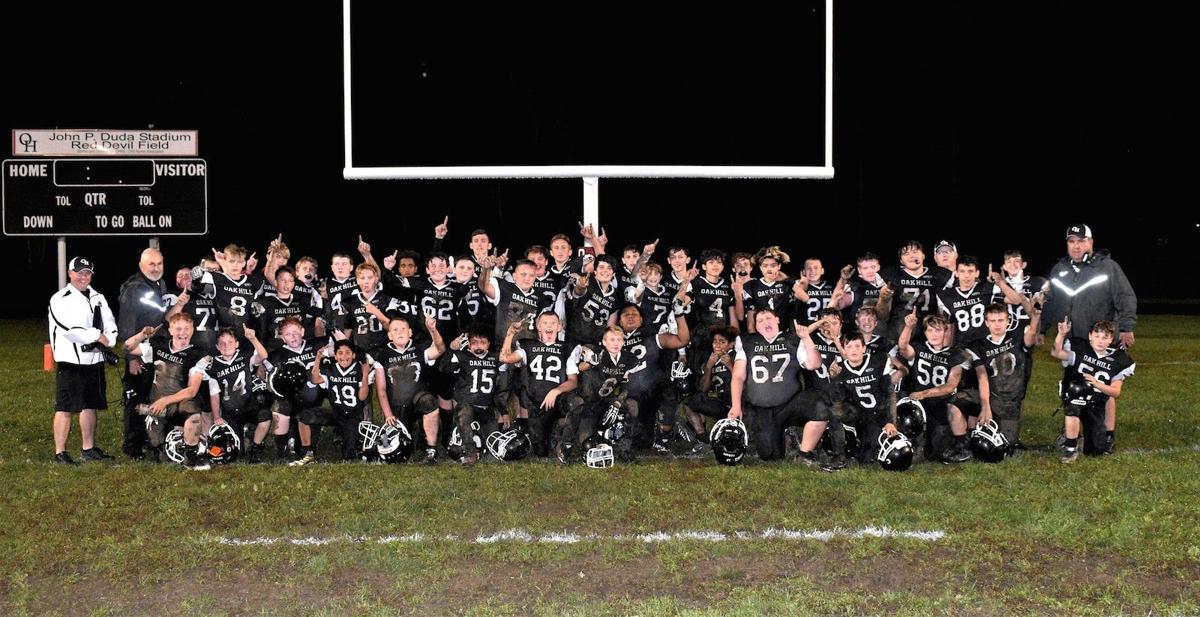 Oak Hill Middle School players and coaches pose for a photo after capping a perfect 8-0 season last Wednesday with a 42-8 defeat of visiting Park. 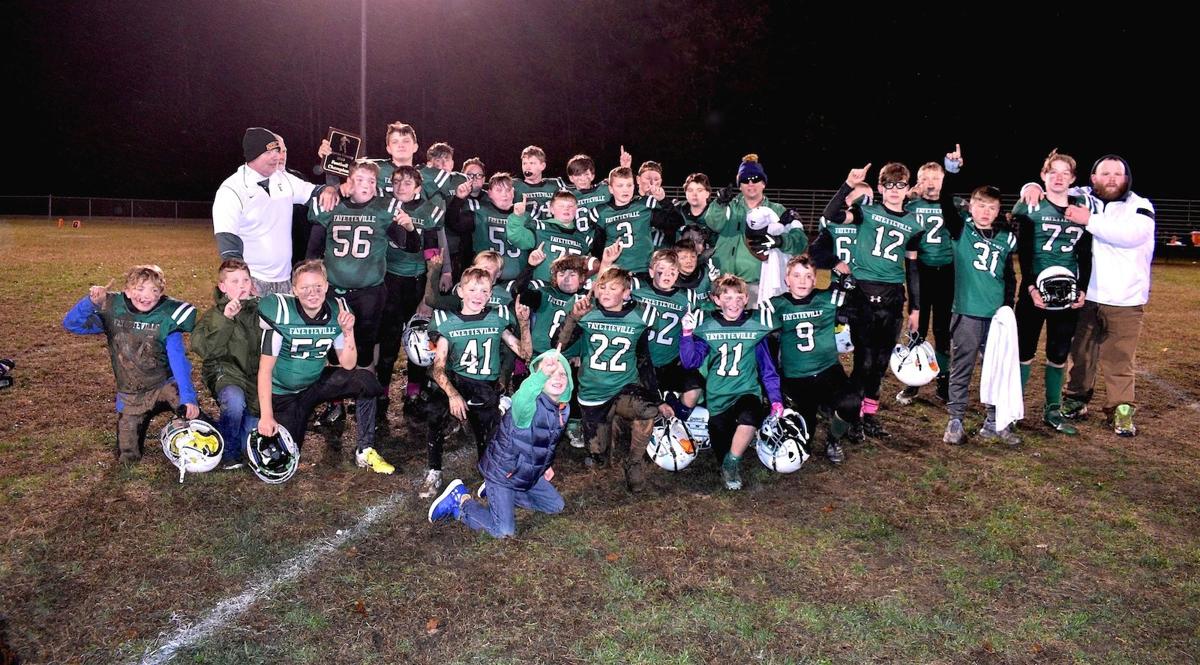 Fayetteville PreK-8 players and coaches gather for a photo Thursday after defeating Midland Trail to conclude an 8-1 campaign. 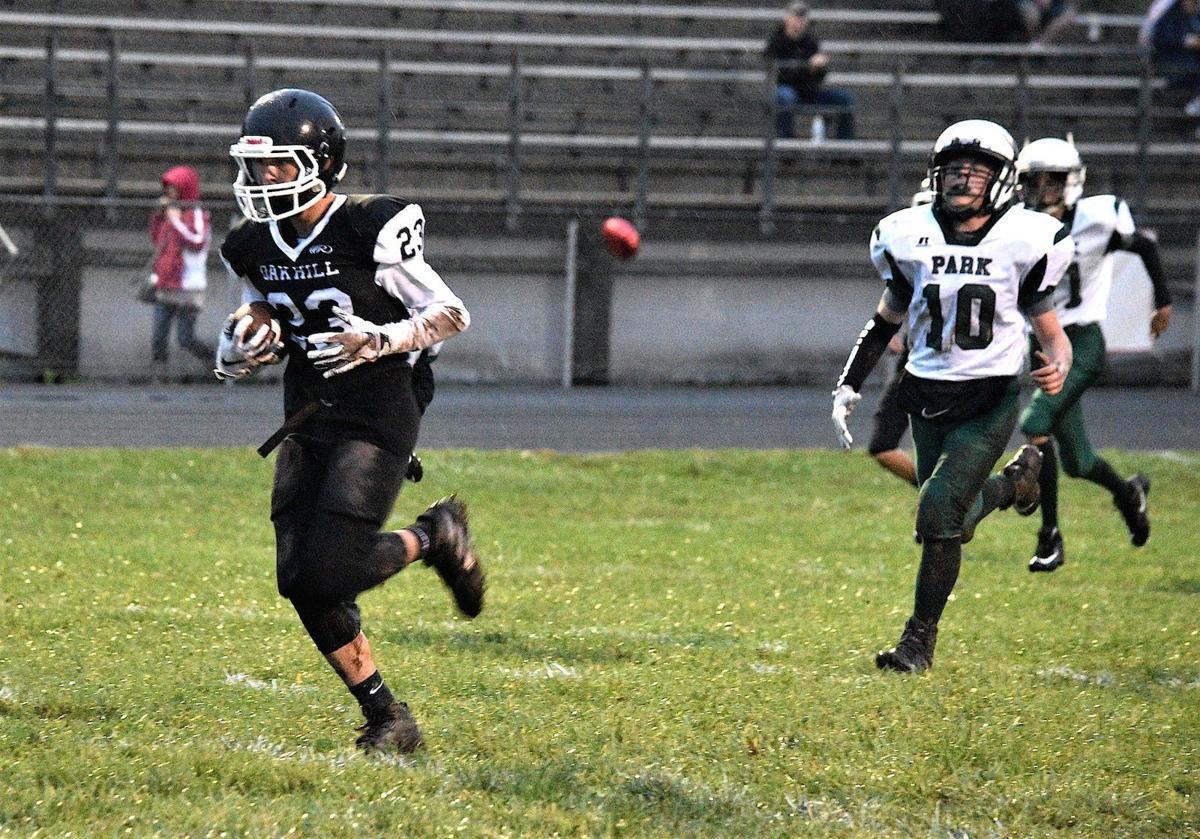 Oak Hill's Kyler Edwards runs after the catch to complete a 25-yard scoring play from Malachi Lewis against Park. 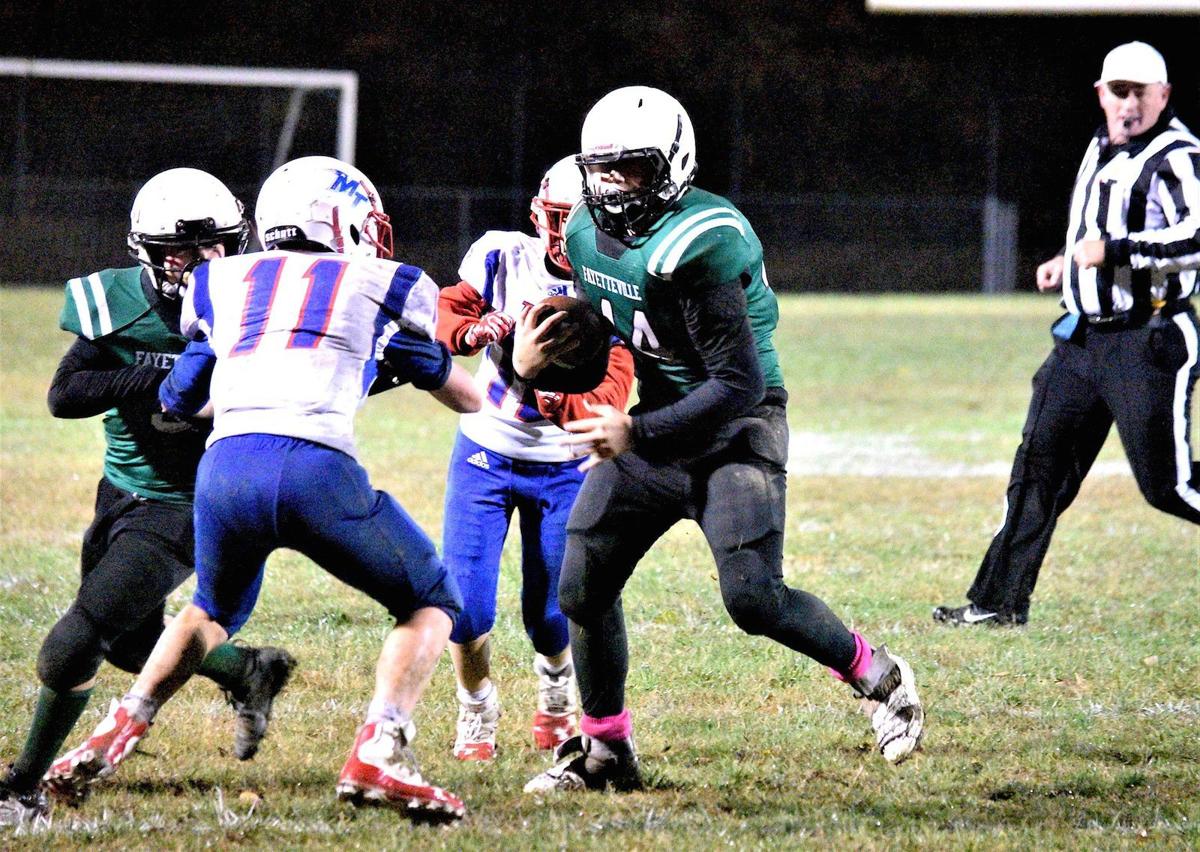 Oak Hill Middle School players and coaches pose for a photo after capping a perfect 8-0 season last Wednesday with a 42-8 defeat of visiting Park.

Fayetteville PreK-8 players and coaches gather for a photo Thursday after defeating Midland Trail to conclude an 8-1 campaign.

Oak Hill's Kyler Edwards runs after the catch to complete a 25-yard scoring play from Malachi Lewis against Park.

On Wednesday, Oct. 30, the Oak Hill Red Devils thumped visiting Park Middle 42-8 to close out a perfect 8-0 campaign. It gave the Red Devil eighth-graders a 23-1 record in their three seasons.

The following night, the Fayetteville Pirates rallied from an early deficit to defeat the Midland Trail Patriots 12-6 to cap an 8-1 season with the county's Class A championship.

"It's always great when you have a really good season," said first-year Oak Hill head coach Jack Brown. "We've tried to instill a work ethic in these boys since we took over, and a sense of urgency and accountability."

"I'm proud of them," Fayetteville coach John Mark Kincaid said of his team. "In the second half, they played lights-out, and the defense dominated the game until we could sustain a drive."

Besides his offensive contributions, Gray returned two interceptions for touchdowns. One covered 40 yards and the other 30.

J.D. Mauritz rambled for 160 yards and a pair of TDs on 20 carries in Fayetteville's victory over Midland Trail.

The Patriots took a 6-0 lead when Aiden Maichle intercepted a pass deep inside Midland Trail territory, and the visitors turned that into the lead when John Bowman subsequently took off a long TD jaunt.

The Pirates answered, though, and Mauritz's two six-pointers eventually provided the difference.

Kincaid, who was assisted by Mike Linkenhoker and Robert Long, said the Pirates locked down on the Midland Trail offense after its score, holding the Patriots to negative yardage the rest of the way.

"The conditioning and the weight lifting paid huge dividends," he said. "And, in the second half, 44 (Mauritz) ran extremely hard, like a diesel; he broke many tackles."

Brown, an assistant for the previous four years before taking the OHMS head coaching spot this fall, said it was a special year for the Red Devils.

"Plain and simple, we tried to outwork the competition," he said. "The boys expect to be good now."

He said he feels "blessed" with the situation. "We have a great coaching staff, a great group of parents that support us, and a great administration."

The outgoing group of 20 8th-graders has also posted impressive credentials on the basketball court and the baseball diamond recently, Brown noted.

Oak Hill's two closest games in 2019 came at Shady Spring (20-14) and Independence (34-22). The Red Devils were losing at halftime to Independence before rallying.

On the season, Oak Hill outscored its opponents 304-72, logged 1,840 yards of offense and registered 10 defensive touchdowns.

Elijah Gray paced the ground attack with 80 carries for 665 yards for an 8.3 yards per carry average. He scored nine TDs and caught a 15-yard pass. Ian Maynor had 45 carries for 362 yards (8.0 per carry) and six TDs. James Green had 142 yards and a pair of six-pointers on four carries, Mason McMullen rushed 13 times for 93 yards and two TDs, and Zychaeus Lewis carried nine times for 70 yards.

Kyler Edwards compiled eight receptions for 229 yards (28.6 yards per catch) and seven TDs, in addition to rushing seven times for 164 yards (23.4 per rush) and four scores.

Leading with a pair of defensive touchdowns each for the Red Devils were Gray, McMullen, Edwards and Hamilton. Rider and Colton Willard each had one.

Fayetteville's J.D. Mauritz finished an outstanding season with 128 carries for 1,564 yards, 22 touchdowns and a pair of two-point conversions. Ian Harper collected 364 yards and four TDs on 36 carries, tacking on a conversion run. Will McGraw ran 34 times for 144 stripes, a TD and a two-pointer. Thad Brown (two touchdowns and a conversion), Adam Long and Cole Nelson also provided rushing yardage.

Robert Guthrie led the receiving corps with 11 catches for 341 yards, six TDs and three two-pointers. Harper had five receptions for 58 yards, a six-pointer and three conversions, and Mauritz, Carter Richardson and Micah McCarraher each had receptions and a conversion score.

Brown was 22 of 42 for 429 yards, seven TDs and three interceptions, in addition to logging nine conversions.

Also, Colton Naylor had 31 tackles and four sacks, Lake McClung had 28 tackles, five sacks and a pair of fumble recoveries, Brown had 19 tackles, one interception and two recoveries, Harper and Bradley Fink (two sacks) had 18 tackles each, Logan Geisbert had 14 tackles, six sacks and a fumble recovery, McCarraher had 13 tackles and a force fumble, and Ethan Sisk had eight stops and recovered two fumbles.