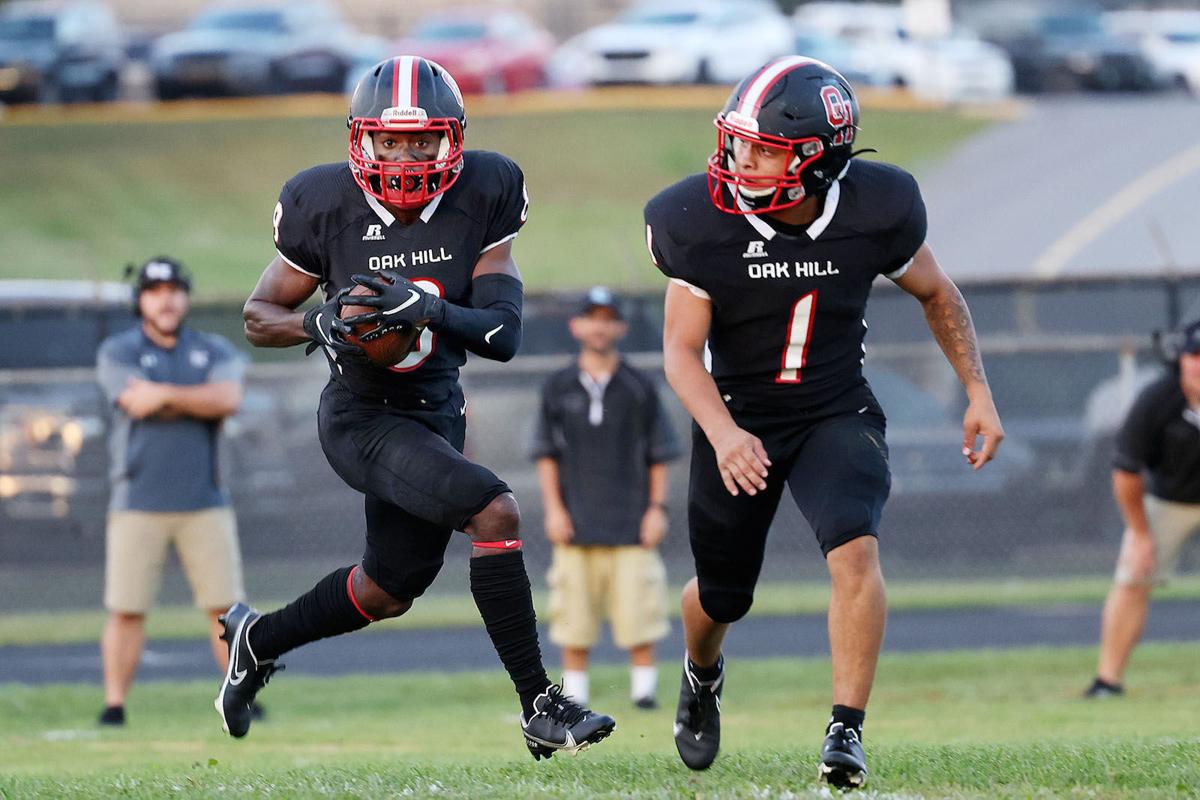 Oak Hill’s Leonard Farrow (8) looks to run as Omar Lewis (1) leads the way during their Homecoming game against Lincoln County in Oak Hill on Friday. 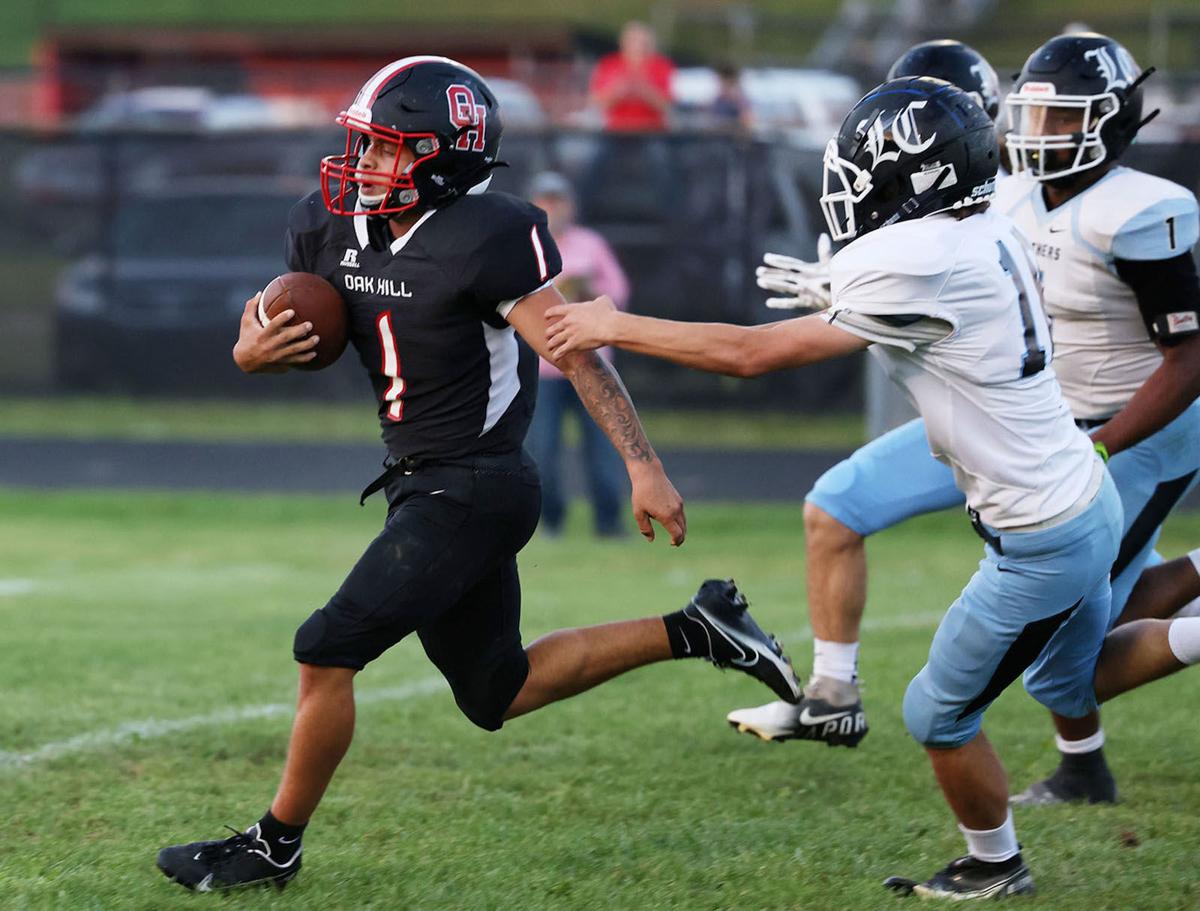 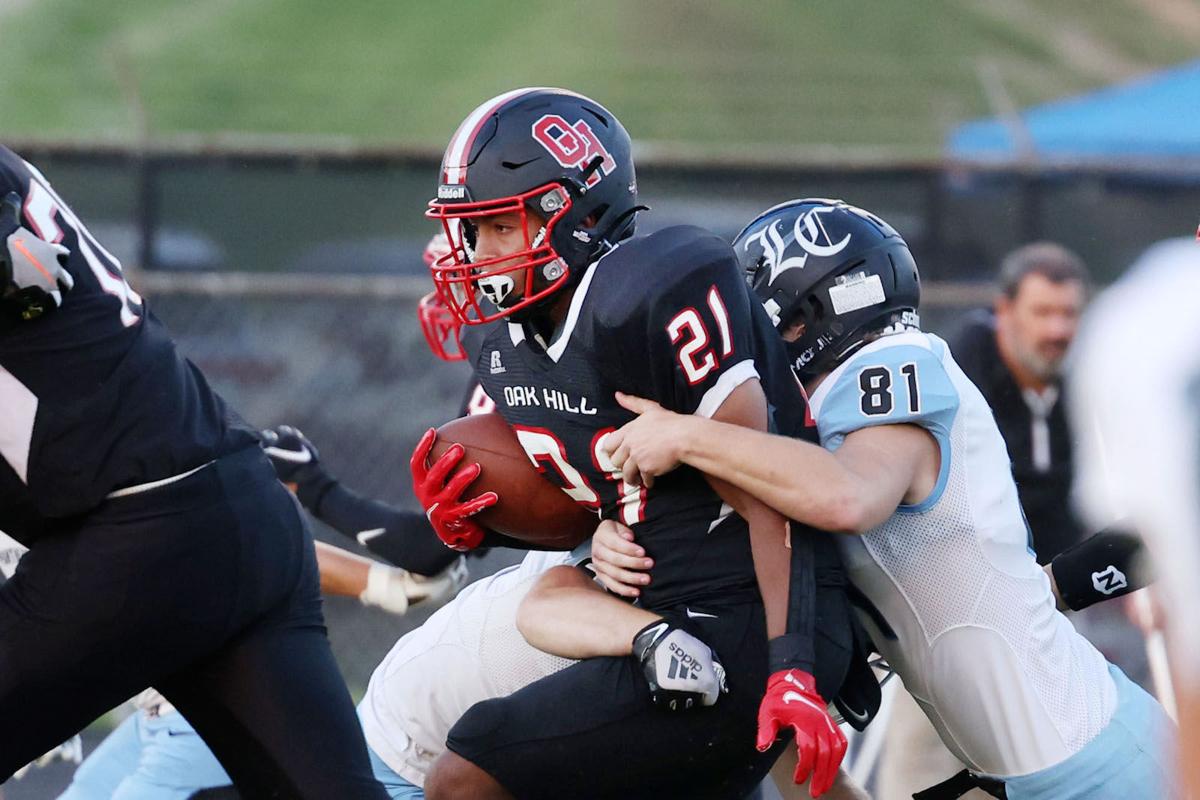 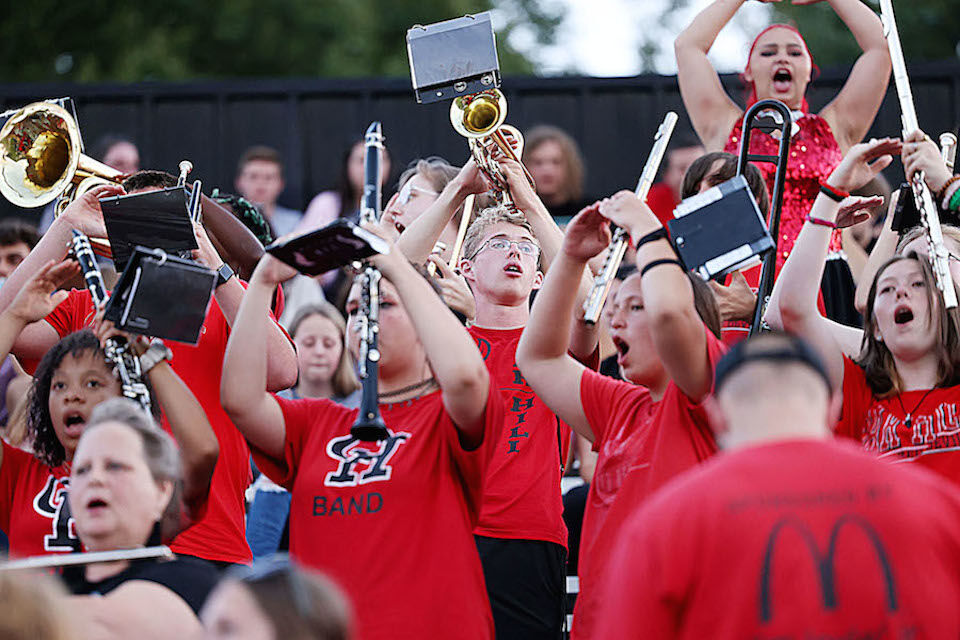 Oak Hill’s Leonard Farrow (8) looks to run as Omar Lewis (1) leads the way during their Homecoming game against Lincoln County in Oak Hill on Friday.

But, that's what he got, and his Panthers broke the finish tape slightly ahead of the Red Devils in a 44-41 football slugfest at John P. Duda Stadium.

The Class AAA co-No. 14 Panthers crawled out of a 41-22 hole against the Red Devils by registering the game's final three touchdowns — two late in the third quarter on a 21-yard pass from Gabe Bates to Isaiah Koontz and on an 82-yard sprint from Isaiah Smith, and the dagger on an 8-yard rollout TD by Bates, the quarterback, that allowed the visitors to reclaim the lead with 5 minutes left in the game and spoil the Red Devils' homecoming night in the process.

"That game right there, that's what they call a track meet," said Likens. "Momentum swings back and forth.

"The momentum was not in our favor coming out of the half. They scored those two times in a row there, but our guys fought back. Overall, I'm really proud of our guys. I told them coming in to this, 'Guys, they're about like us, it's going to a dogfight,' and that's what it was. I didn't expect a track meet, but it was a track meet and a dogfight."

On the night, Smith carried 20 times for 237 yards and three scores, with the other TDs covering 10 and 21 yards in a frantic first quarter that ended with the Red Devils leading 20-14. He also had a long punt return score nullified by a penalty. And, Smith made a key defensive stop in the backfield as Oak Hill tried to respond after falling behind 44-41 late in the contest. "Isaiah's a special kid," Likens said of his senior back. "He plays his heart out on offense and anytime we need him for defense he's always 'I'm right here, Coach,' no matter how gassed he is. He carried us tonight. There's a lot of Friday nights he does carry us.

"Give some credit to our big guys up front, and our quarterback (Bates). He struggled to find receivers early, but he made some big plays down the stretch; he had that big run there."

Smith's second scoring run in the free-wheeling first quarter came as a result of a blocked punt by the Panthers. Lincoln's Logan Sponaugle blocked an Ethan Vargo-Thomas punt, and Isaiah Koontz fell on it to set up a prime scoring chance.

The host Red Devils — who got on the board first with a 36-yard scamper by Omar Lewis — got two straight six-pointers from speedster Leonard Farrow as the first period wound down. Farrow reached the end zone from 5 yards away two straight times, with the first score capping a possession that was keyed by a 29-yard pass from Alex Colaiseno to Farrow and two Lewis runs covering 10 and 9 yards, and the second coming after Vargo-Thomas's squib kick was successfully recovered by Oak Hill's Alex Baxter to set up another Farrow score on a drive that was aided by a 32-yard Lewis run in which he escaped a scrum and bounced outside to move the sticks to the 5.

The two teams then traded scores, with Bates capping a 12-play, 68-yard drive for Lincoln County with a 3-yard TD, and Farrow crossing the goal line for the third time on a 21-yard rush, which, combined with the Vargo-Thomas PAT, handed the Red Devils a 27-22 spread with 1:27 remaining until intermission. The Red Devils also had another score — on a 75-yard interception return by Vargo-Thomas — nullified by a pass interference call further up the field in the first half.

After the halftime break, Oak Hill took control with a surge in the initial stages of the third period. Forcing a Panther punt, the Red Devils were called for a holding penalty, but Farrow then hauled in a pass from Colaiseno in the right flat, broke across the grain, eluded several Lincoln defenders and raced 75 yards down the visitors' sideline to the end zone for a 34-22 lead at the 7:27 mark.

Oak Hill kept up the pressure on the ensuing kickoff. Oak Hill's Aaron Higginbotham recovered a Lincoln County fumble on the kick and, on the fourth play of the ensuing Oak Hill drive, Vargo-Thomas punched over a 5-yard score, and Vargo-Thomas's kick staked the hosts to a 41-22 cushion with 5:40 to go in the third.

That set the stage for the late Lincoln push. When the smoke had cleared from the three-TD surge, Oak Hill still had time, but a 55-yard punt from Lincoln's Colin Miller rolled to the Oak Hill 2 with 1:06 to play and made it difficult. Farrow ripped off a 23-yard run on the first play, but the Devils didn't have enough left in the tank to stage a final rally.

On the night, Farrow rushed 17 times for 122 yards and three scores for Oak Hill, in addition to catching two aerials from Colaiseno for 104 yards and a fourth score. Lewis amassed 140 yards and a six-pointer on 16 carries.

"I can't say it's anything the kids are doing," said Oak Hill head coach David Moneypenny. "I think they're playing hard. We're trying to teach them.

"We've got some really good kids. They're playing hard. Sometimes it just takes a little bit longer. It's disappointing, not the year we had hoped to have. It's tough when you have these types of games and you've got to search for ways to make the kids understand that there are actually good things they're doing.

"When you look at them and see that disappointment, it's tough."

The Wildcats (1-2) are open this week before hosting Greenbrier West on Oct. 1.