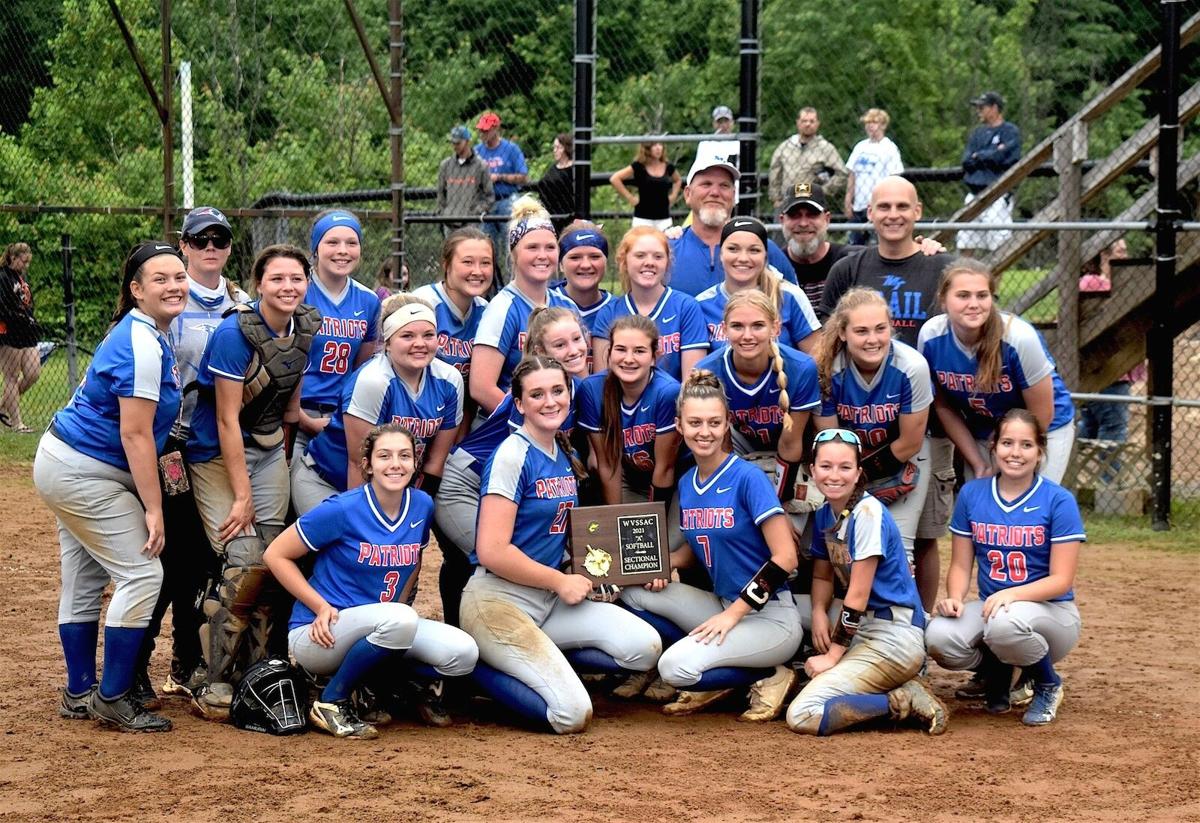 The Patriots and their coaches pose for a team photograph as the Midland Trail High softball team celebrates its Class A Region 3, Section 2 championship Wednesday in Hico. 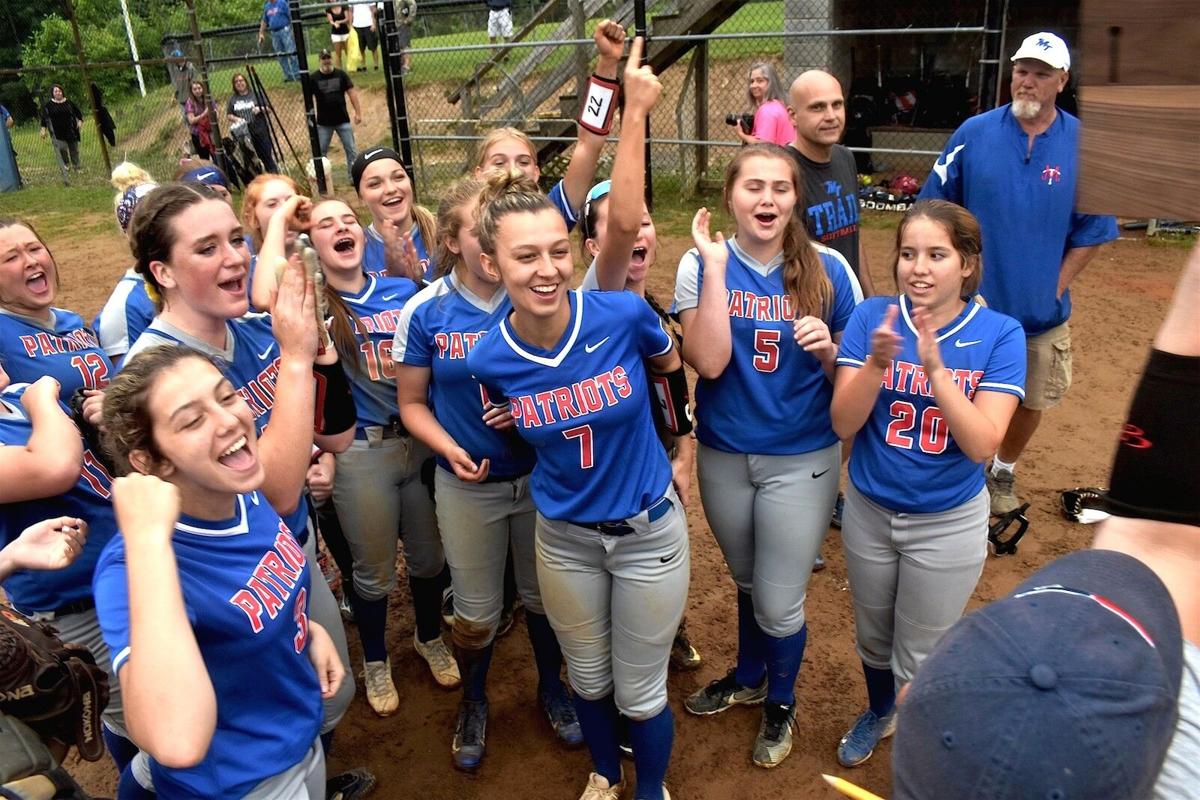 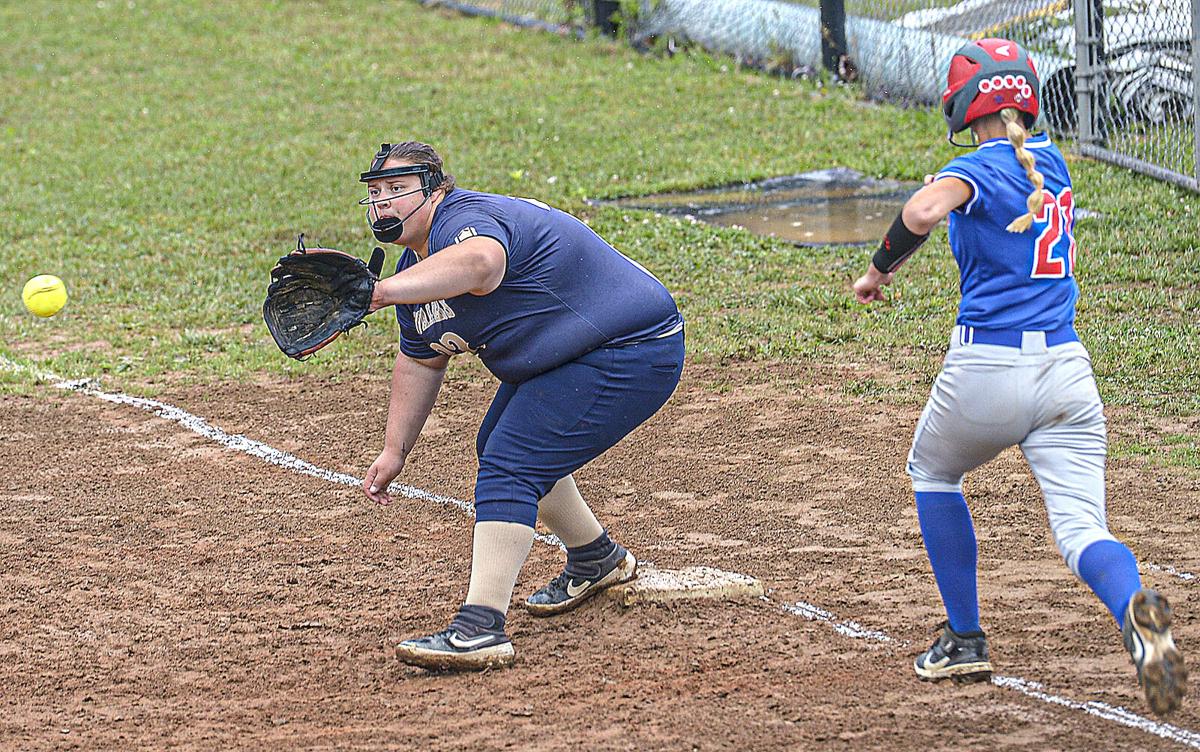 Greenbrier West's first baseman Braelee Brown waits for the throw for an out on Midland Trail’s Madison Campbell during Wednesday action in Hico. 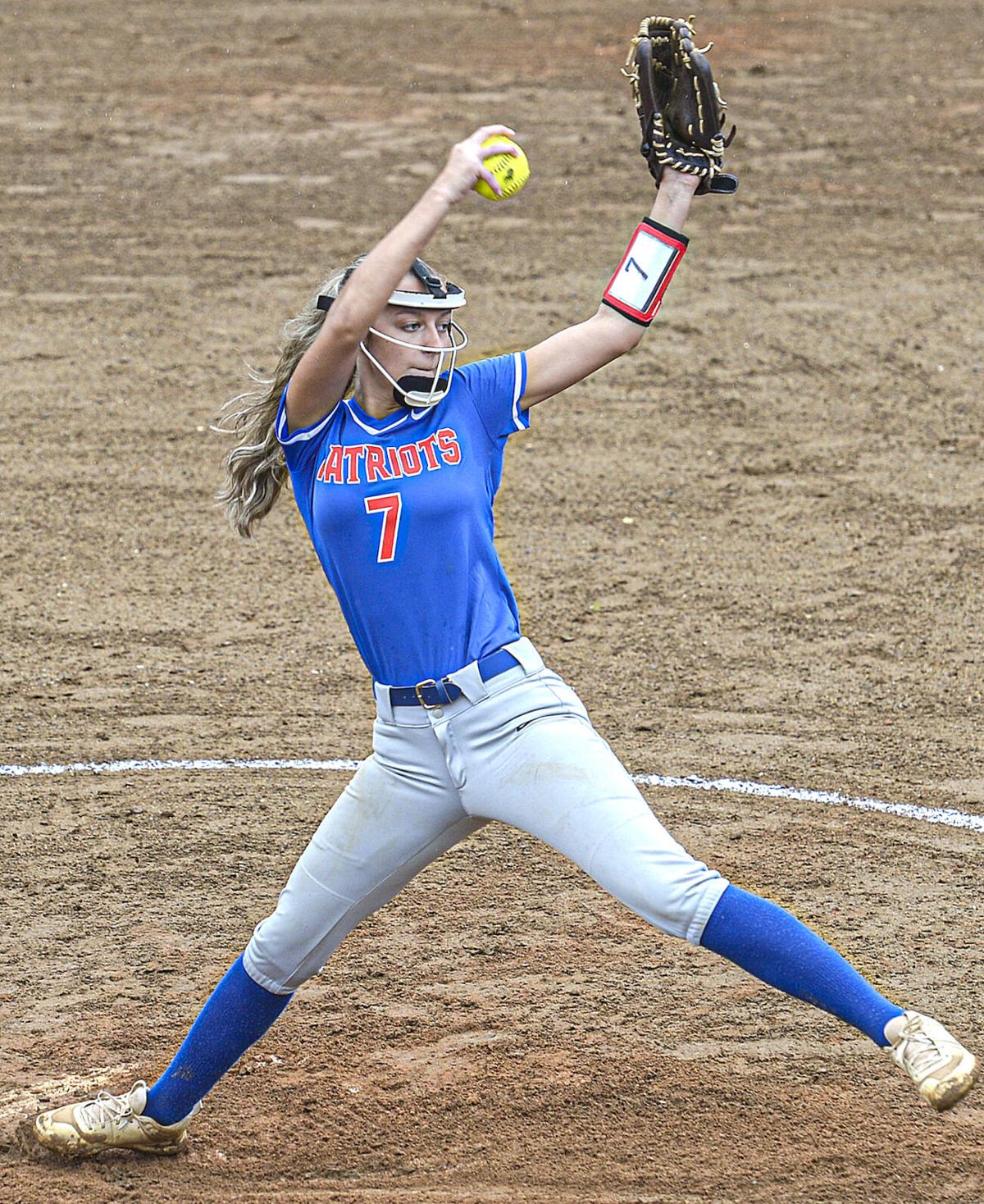 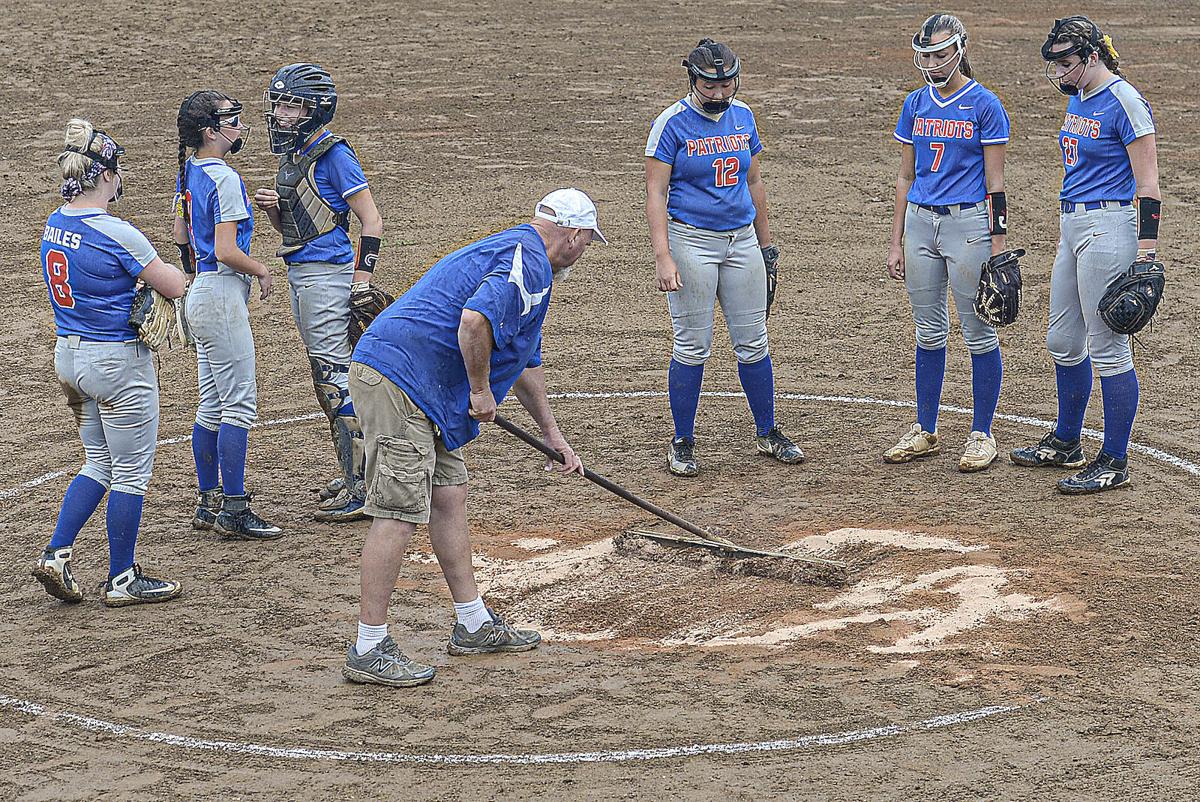 Midland Trail players take a time-out while the grounds crew in the form of Midland Trail assistant coach Darin Minor manages the mound during a rainy Wednesday game against Greenbrier West in Hico. 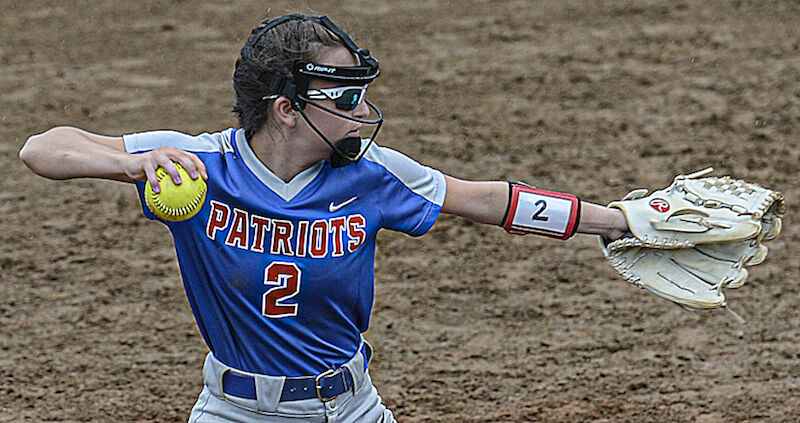 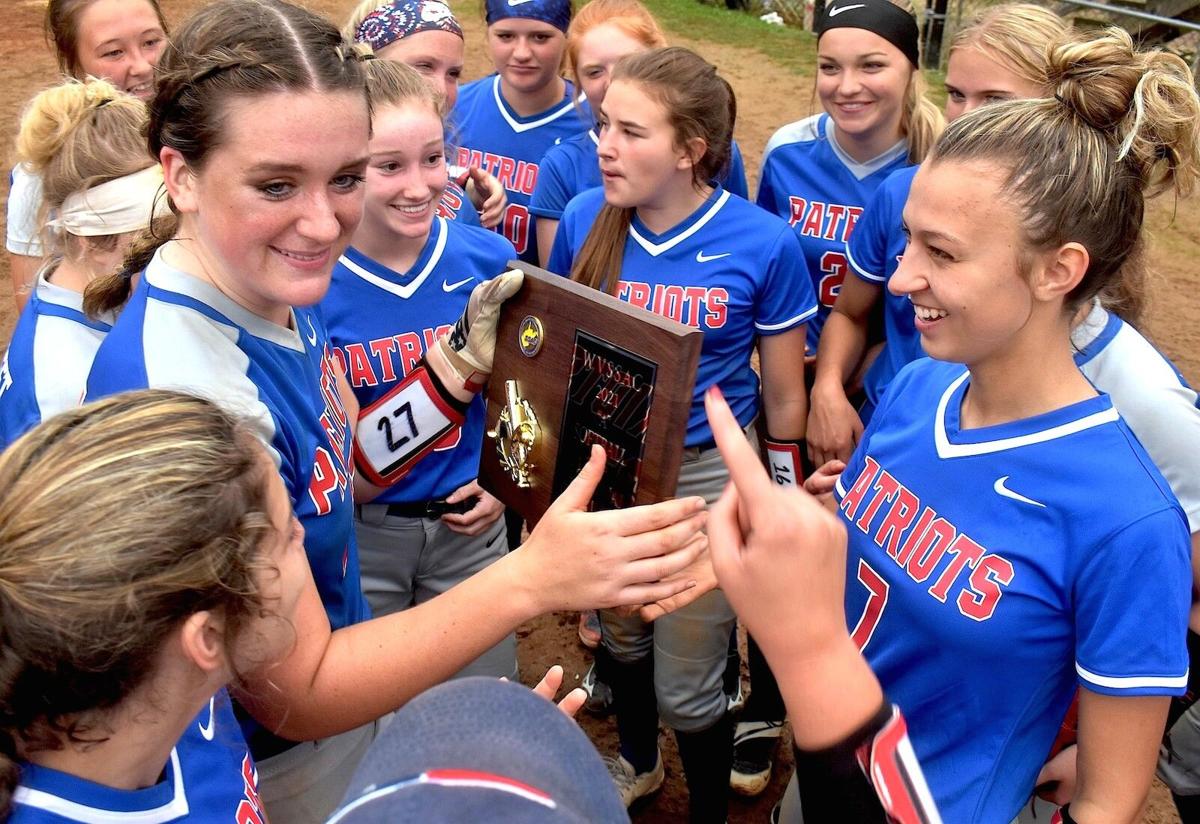 The Patriots and their coaches pose for a team photograph as the Midland Trail High softball team celebrates its Class A Region 3, Section 2 championship Wednesday in Hico.

Greenbrier West's first baseman Braelee Brown waits for the throw for an out on Midland Trail’s Madison Campbell during Wednesday action in Hico.

Midland Trail players take a time-out while the grounds crew in the form of Midland Trail assistant coach Darin Minor manages the mound during a rainy Wednesday game against Greenbrier West in Hico.

HICO — Before a couple of Midland Trail softball players gave head coach Candace Young a celebratory wheelbarrow ride on Wednesday, they gave her a welcome present.

The Patriots built up a 6-0 lead over Greenbrier West through three innings of a Class A Region 3, Section 2 championship-round game, and they made that lead stand up with an eventual 7-3 victory over the scrappy Cavaliers to advance to the Region 3 championship series next week against James Monroe. That series begins at Hico at 5:30 p.m. on Monday, before switching to Lindside on Tuesday.

"I'm very, very pumped," said Young, who has been the Midland Trail head coach for nearly a decade. "I told the girls in the huddle this is my first piece of hardware as a head coach, so I'll remember this one forever. It will mean a lot.

"I loved the grit they showed there to make sure we held on for that win."

A section softball title in Hico has "been a while, so this is a big piece of hardware," she added.

Midland Trail started strong, plating four runs in the bottom of the first inning, aided in part by RBIs from Sydney Sheets and Faith Bailes. The Patriots later stretched the margin to 6-0 on a two-run homer off the bat of center fielder Madison Campbell on a 1-2 pitch with two outs in the bottom of the third frame.

In the West portion of the third, the Cavaliers had put two baserunners on, but Midland Trail second baseman Madison Berry snagged a hard-hit line drive off the bat of West's Braelee Brown, then doubled off her teammate, Julia Herndon, at first to douse a threat.

Two innings later, Greenbrier West went on the attack again. Trailing 6-0, the Cavaliers got RBIs from Herndon, Brown and Karli Holliday to trim the deficit in half, 6-3.

"They're a really good team and well-coached, so we knew it was going to be tough today," said first-year Greenbrier West head coach Tony Hinkle. "We hit the ball; we're hitters. We've always had a good hitting team the last four or five years. The first game we played them, we didn't hit the ball very well."

Trail's Layla Tompkins closed out the scoring with a solo shot over the center field fence in the bottom of the fifth.

The Cavaliers stranded two baserunners in the sixth, and they couldn't make any inroads in the seventh, either. Midland Trail's Emily Dickerson made a nice running grab in the outfield to aid her team's defensive effort in the final frame.

Emmie Lopetrone earned the pitching win for Midland Trail, with one-hit relief help from Meghan Gill during a 2 1/3-inning stint.

"They came out and they gave us a ball game," Young said of Greenbrier West, "but I don't think we necessarily played our game. We had more miscues than we have had in the past.

"It wasn't the prettiest win, but I'll take the win."

"We walked more (than normal)," Young continued. "That was a factor in letting them claw back, but they're a good hitting team. They hit the ball, and they jumped on the ball.

"They weren't sitting back and waiting. They attacked the ball, and I give them credit for that, for sure."

Hinkle said his team struggled early in the season (0-3 at one point) before settling in and fashioning a solid campaign. "We were 4-5, (then) won 12 of last 14," he said. "What more could we ask for? We've got one senior, three juniors, and everybody else is a freshman or sophomore, and we only had two girls that had ever played in a varsity game before this year.

"We feel good. We always fight; they fight to the end. Real proud of the girls."

"I want to give a shoutout to our senior, Caley Chrisman, our shortstop," Hinkle added. "She just had a tremendous year.

"Before this game, she was batting .609 and her on-base percentage was .709 (with several homers to her credit). That's just out of this world. She's been a leader these girls look up to."