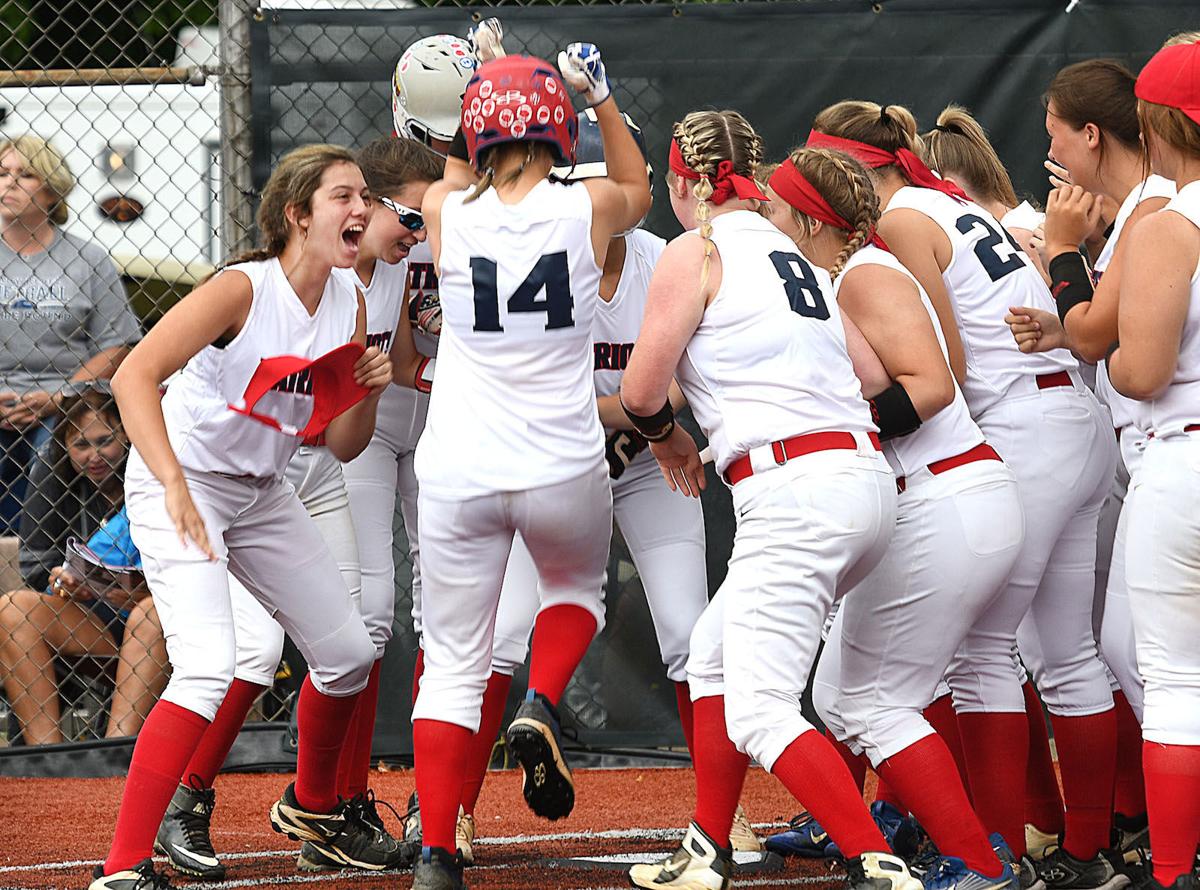 Midland Trail’s Sydney Sheets (14) is greeted by her teammates after hitting a first-inning home run against Ritchie County during the Class A state softball tournament held at Little Creek Park in South Charleston. 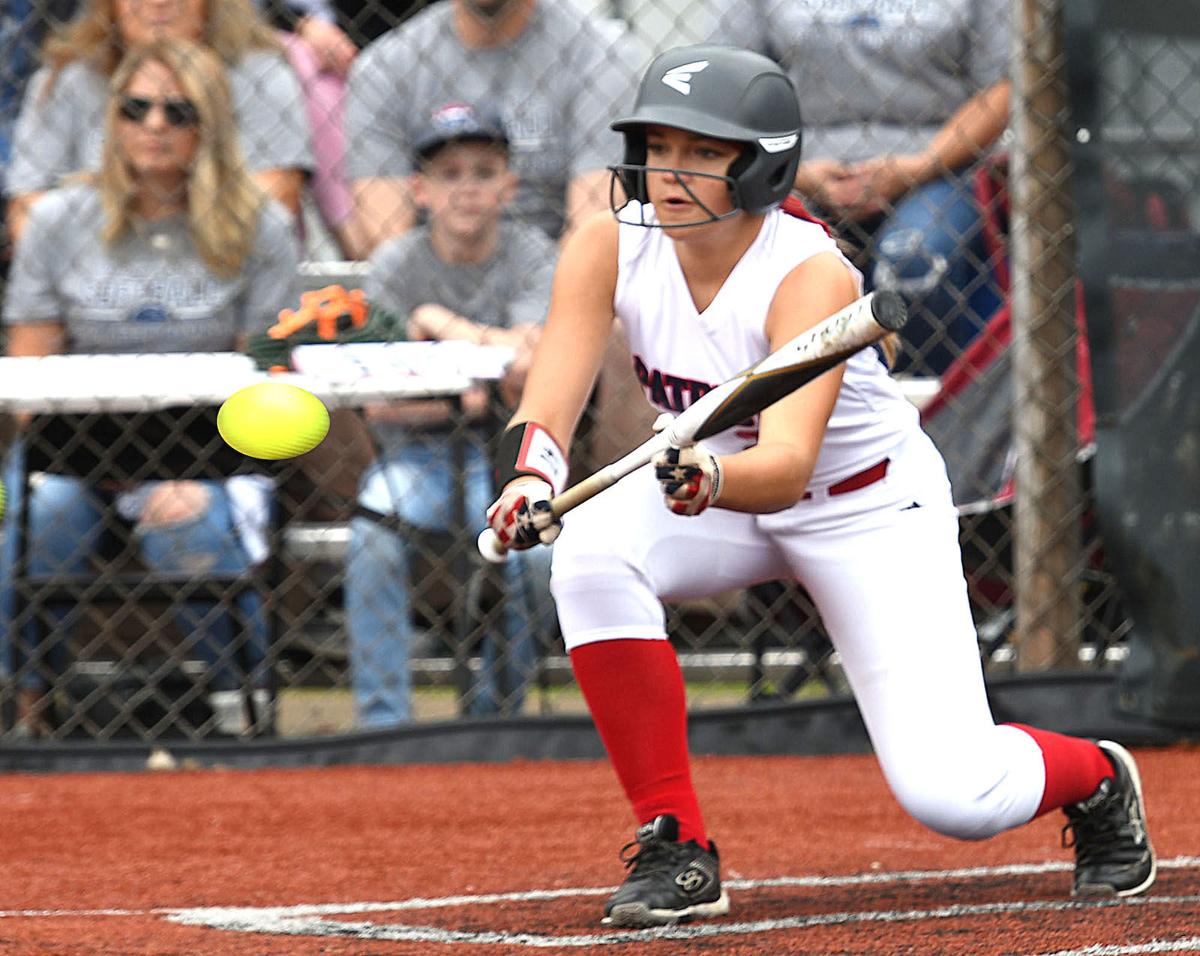 Malayla Campbell, of Midland Trail, lays down a bunt against Ritchie County. 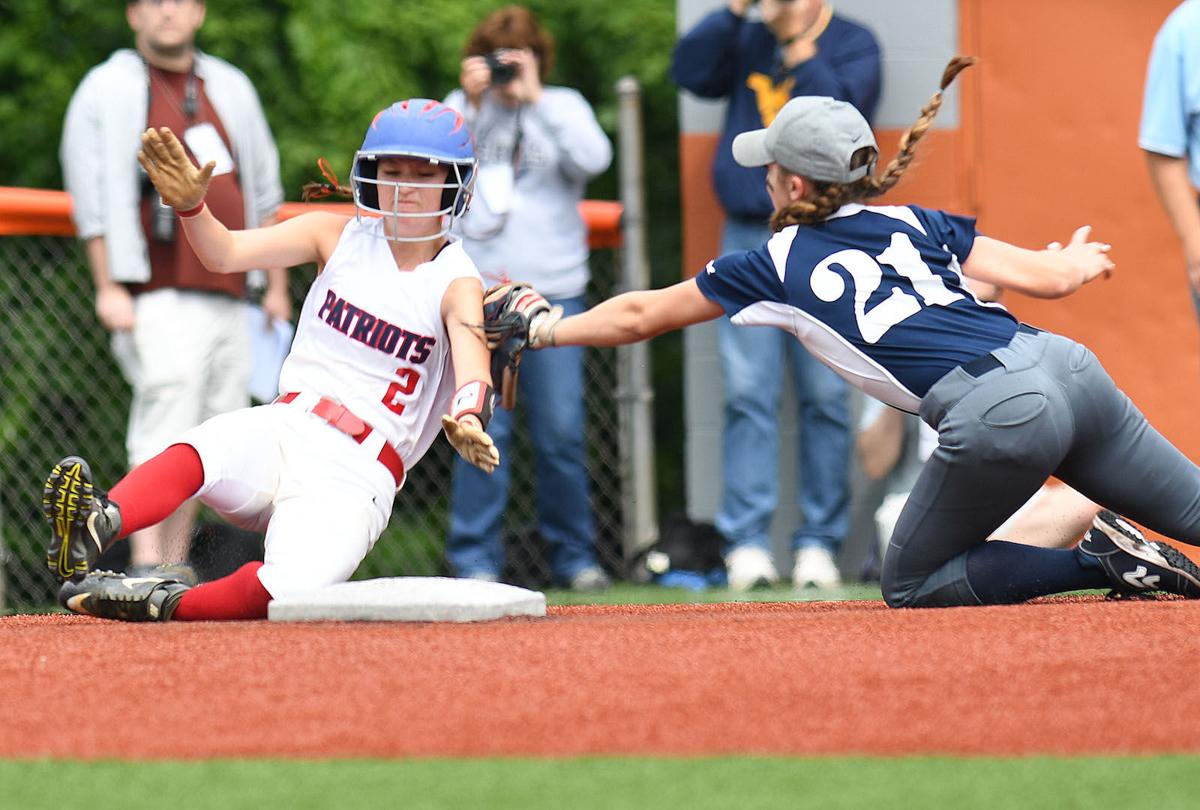 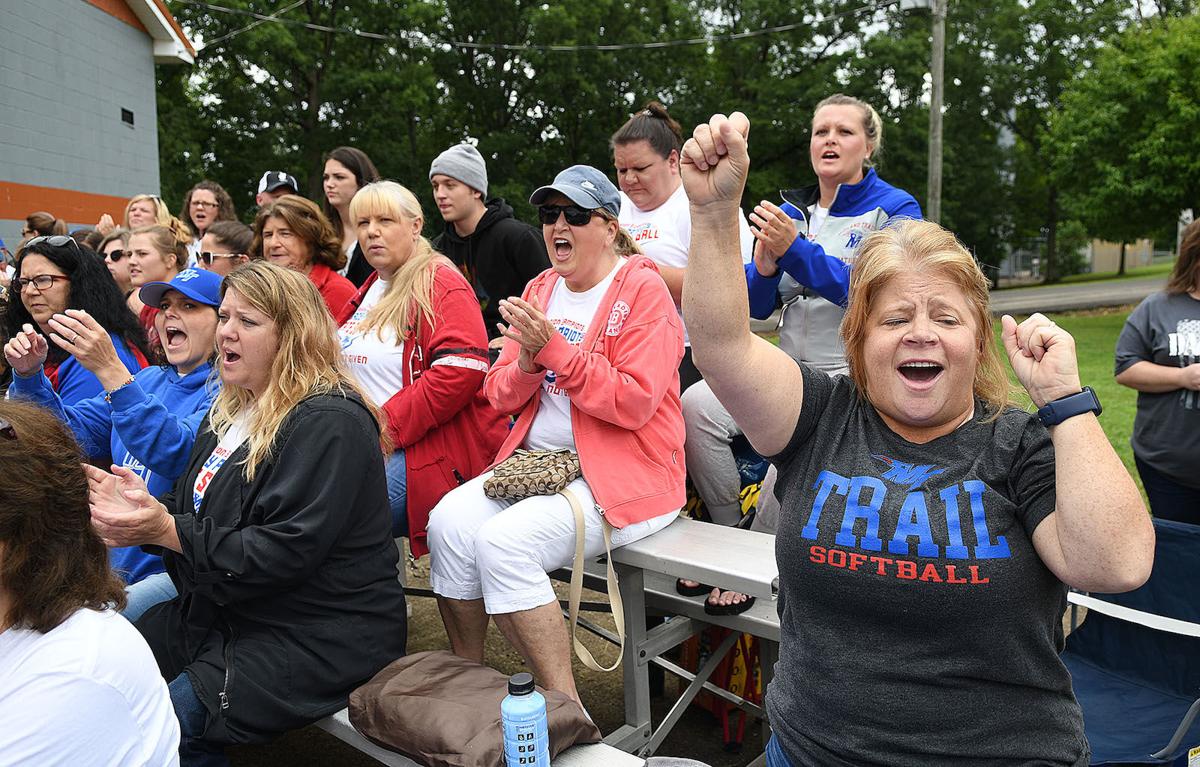 Tracy Grimmett cheers for the Midland Trail squad at the state tournament. 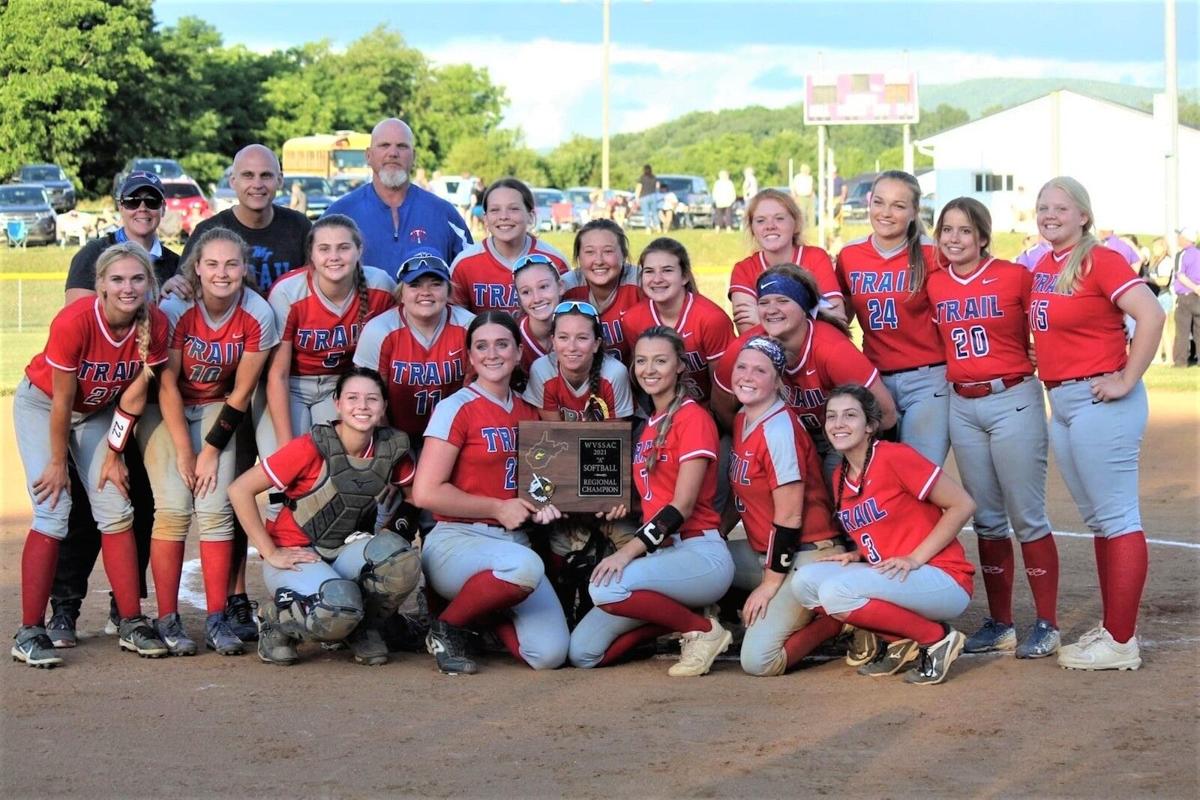 The Midland Trail Lady Patriots are pictured following their regional title win which qualified them for the state softball tournament for the first time since 2004. 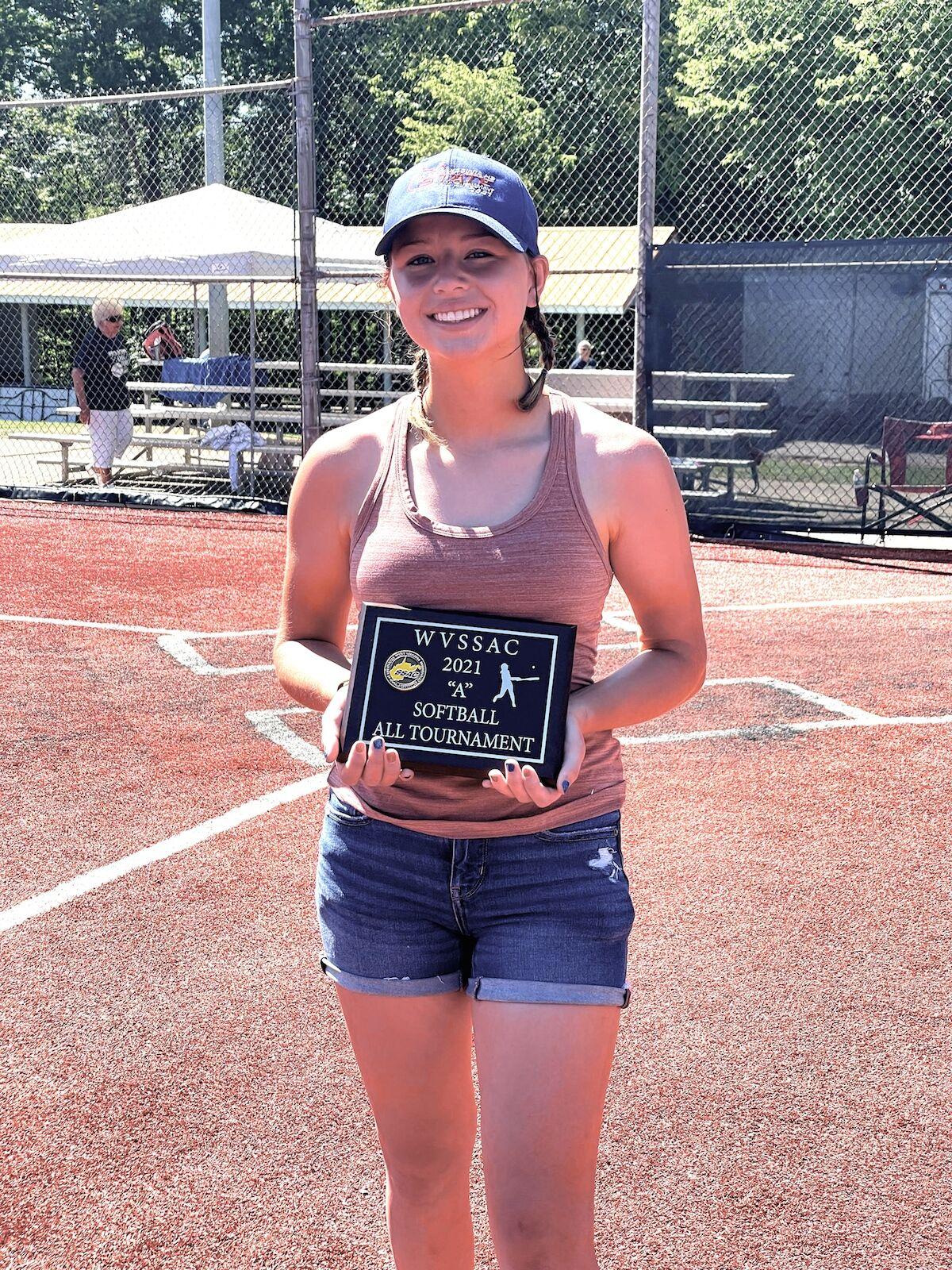 Midland Trail's Sydney Sheets was a member of the Class A All-Tournament team.

Midland Trail’s Sydney Sheets (14) is greeted by her teammates after hitting a first-inning home run against Ritchie County during the Class A state softball tournament held at Little Creek Park in South Charleston.

Malayla Campbell, of Midland Trail, lays down a bunt against Ritchie County.

Tracy Grimmett cheers for the Midland Trail squad at the state tournament.

The Midland Trail Lady Patriots are pictured following their regional title win which qualified them for the state softball tournament for the first time since 2004.

Midland Trail's Sydney Sheets was a member of the Class A All-Tournament team.

Midland Trail's second-game bid to advance into Day 2 of the 2021 WVSSAC State Softball Tournament in South Charleston benefitted from an early surge.

But, the Patriots seemed to lose steam as the game progressed, and Petersburg — fueled by a big five-run fourth inning — built up momentum in the game's latter innings en route to an 11-5 victory which eliminated Midland Trail from the Class A field and ended a fine 20-6 Patriot campaign.

Aggressive early, Midland Trail jumped out to a 4-2 lead through two innings and led 5-3 after three. In the first, Meghan Gill stroked a two-run double to the center field fence to get the Patriot attack going. Trail had moved base runners in scoring position at second and third with a double-steal during Gill's at-bat.

The Vikings knotted the score at 2-all in their half of the first, then Trail's Chezney Skaggs smacked a two-run double of her own in the top of the second to stake the Patriots to a 4-2 lead. Midland Trail moved into a 5-2 cushion in the third when Jordian Stonestreet's double to left scored Gill, who had reached on an error.

While the Trail offense was humming along in the early stages, the defense provided some solid efforts, too. Patriot catcher Sydney Sheets threw Petersburg's Lauren Alt out at second to end the bottom half of the second. In the next frame, MTHS center fielder Madison Campbell raced to make a sliding catch in shallow center field to end another Petersburg threat, right after the Vikings' Jenna Burgess had homered to trim the deficit to 5-3.

Then, the fateful fourth inning arrived for the Patriots, who stranded two in the top half of the frame. In the home half of the fourth at Little Creek Park, the Vikings pushed across five runs to assume an 8-5 lead going into the fifth. The fourth featured a little bit of everything for Petersburg — a pair of identical seeing-eye singles to left field to start it off, a key sacrifice bunt, a Midland Trail fielding error, a pair of run-scoring singles, and a two-run double from Burgess, who wound up with four RBIs on the evening.

"We came out of the gate the second game doing the things we talked about doing," said Midland Trail head coach Candace Young. "We mixed up the lineup a little bit to try to capitalize on what we were good at.

"We did the job in 1 through 3, and then I don't know, fatigue maybe or ... There was a massive turning point that the wheels kind of fell off."

Petersburg kept up the pace in the fifth, plating three more runs to put the game out of reach. Two Trail throwing errors in that inning made the going easier for the Vikings.

"(Starting pitcher) Emmie (Lopetrone) gave it her all out there throwing, but I think she was a little gassed," Young said. "They got some timely hits."

Midland Trail alternated Lopetrone and Gill on the mound in the closing innings.

The Patriots' Skaggs initiated a nifty inning-ending double play in the sixth, racing to catch a fly ball in foul territory and firing the ball to a covering Gill for the third out at third base, but the damage had been done and Midland Trail could never recover following that middle-inning stretch.

Midland Trail got a leadoff double from Emily Dickerson to start the sixth, but she was eventually stranded. And Trail could manage only a Madison Campbell walk in the seventh, but she, too, was left on base.

"They (Petersburg) came back with that lefty (Kymberly Minnich), their ace," Young said of the latter innings. "They made that shift, and we just couldn't adjust. We watched a lot of strikes.

"After that third inning, the aggressiveness in us kind of faltered, and I think that hurt us a lot."

Just as with the nightcap, Trail's morning game Tuesday started with early promise. It regressed as the innings marched on.

The Patriots struck early against Ritchie County when catcher Sydney Sheets launched a solo home run in the top of the first inning for a 1-0 Midland Trail lead. However, the Rebels answered with four runs in their half of the initial frame for a 4-1 cushion. A three-run home run by the opposing catcher, Jayci Gray, was the key blast.

The Rebels plated another run in the third and four more in the fourth to eventually post a 9-1 victory in five innings. Ritchie County didn't have to bat in the fifth.

"We weren't clean, a lot of untimely errors," said Young. "I don't know if it was nerves or just focus, or what, but certainly we did not play the same ball we played for the last 17 or 20 games, whatever it's been. Game 1 and Game 2 had some of the same issues, untimely errors and not timely hits."

Ritchie (22-5) advanced to a Tuesday late game in the winners' bracket against Wahama, a game won by the White Falcons.

Midland Trail had a 17-game winning streak snapped in the opener.

A key takeaway from the tournament for her team will be "coming out of the gate with intensity, we can't sit back on our heels at all," Young said. Next year, she said, "Intensity is going to be preached left and right. Capitalizing on what we can do. And we're going to get in better shape; we're going to run more. We've got to do all the little things right to make the big things happen."

The opening contests Tuesday were delayed by an hour due to rain.