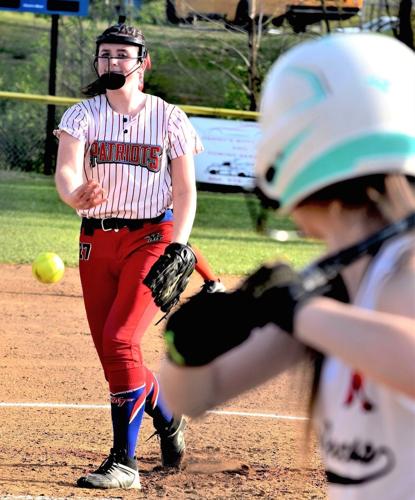 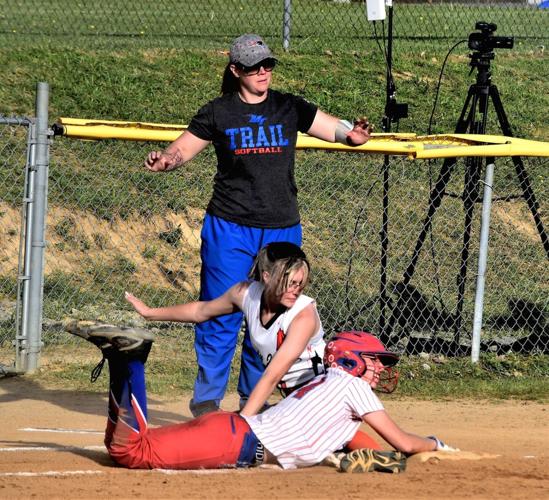 Midland Trail's Syd Sheets is tagged out at third base by Richwood's Kiara Smith after Sheets got caught in a rundown between third and home. Midland Trail head coach Candace Young is hoping to get the call from umpire Bunny Taylor.

Midland Trail's Syd Sheets is tagged out at third base by Richwood's Kiara Smith after Sheets got caught in a rundown between third and home. Midland Trail head coach Candace Young is hoping to get the call from umpire Bunny Taylor.

Midland Trail pitched a shutout Tuesday to take a successful first step in a potential return to the state softball tournament field.

The No. 2 Patriots manufactured single runs in the second and third innings before exploding for five scores in the bottom of the fourth to take control over No. 3 Richwood en route to an 8-0 victory on the second night of the Class A Region 3, Section 2 softball tournament.

In that crucial fourth frame, Trail's Lexi Dozier and Jesse Skaggs each drove in a run with a single, then a stand-up triple by Syd Sheets to left field accounted for two more runs and a 6-0 cushion. Teammate Chezney Skaggs closed out the uprising with a sacrifice fly RBI to right field, leaving the Lumberjacks staring at a 7-0 deficit heading into the top of the fifth inning.

Midland Trail got its eighth and final run when a bunt off the bat of Layla Tompkins in the bottom of the fifth scored Jenna Stonestreet and brought an automatic early end to the contest.

"We did (make contact)," said Midland Trail head coach Candace Young. And, she said, "We came up big a couple times with a nice bunt. Sometimes when you're not sure at the plate, lay it down and see what happens."

As Tompkins went to the plate in the fifth, Young said, "She had (struck out) her last at-bat and I said, 'Kid, I need it. I need you to lay it down first pitch. We're scoring this run; we've got to make this happen.'

"She laid it down perfectly; you couldn't have asked for a better bunt. And Jenna (Stonestreet) just kept going. I'll take it."

While the Midland Trail offense accounted for 12 hits on the evening, Patriot senior pitcher Meghan Gill kept Richwood's bats largely silent. The 'Jacks did get runners on second and third base to start the game, but Gill induced the final two batters of the opening frame to strike out swinging, and she finished the contest with 11 punchouts and yielded just three hits during the shutout.

"We got here early, and she warmed up at like 4:45, and we sat there waiting on blue (the game was moved from 5 to 6 p.m. to give the umpiring crew time to arrive)," Young said. "I think I probably should have had her go out and throw a little bit more because we sat in the hot sun.

"It was a little bit of a slow start, yeah. She came back and really (took charge). There were a couple of pitches that hurt my hand sitting on the bucket, so I know Syd (catcher Sheets was feeling it)."

The win moved the Patriots to 9-9 on the season. "That (record) is subjective, in my opinion," said Young. "We play a lot of double- and triple-As."

"Coming into the season, we had to make some adjustments, losing five seniors," she explained. "We've got a lot of young kids out here. It wasn't until our first or second game that I looked out there and realized I only had four girls with any varsity experience.

"So it's been a learning curve for the girls. I think we've hit at the right time to start playing some really good ball and getting some things put together. But, to go from five seniors and a lot of experience (into a much less experienced rotation) has definitely been a learning experience for us."

Sheets was 3-for-3 with a triple and a pair of RBIs to power the Midland Trail offense. Gill and Stonestreet each had two-hit efforts and drove in a run.

Pitcher Katie Stanley was 2-for-3 to lead the Richwood offense.

On Wednesday, the Patriots blanked No. 1 Greenbrier West 8-0.

A six-run surge in the fourth and fifth innings combined lifted No. 2 Midland Trail past the Cavaliers at Crawley in the Class A Region 3, Section 2 event.

Layla Tompkins had a triple and a double in two at-bats while driving in a run to lead the Patriots. Meghan Gill was 2-for-3 with a double, and Madi Campbell was 1-for-2 and drove in three runs.

For the Cavaliers, Hannah Sweet was 2-for-2 to lead the effort.

Gill went the distance to secure the win on the mound.

The Cavaliers (10-9-1) await the Webster County-Richwood winner on Friday at home.