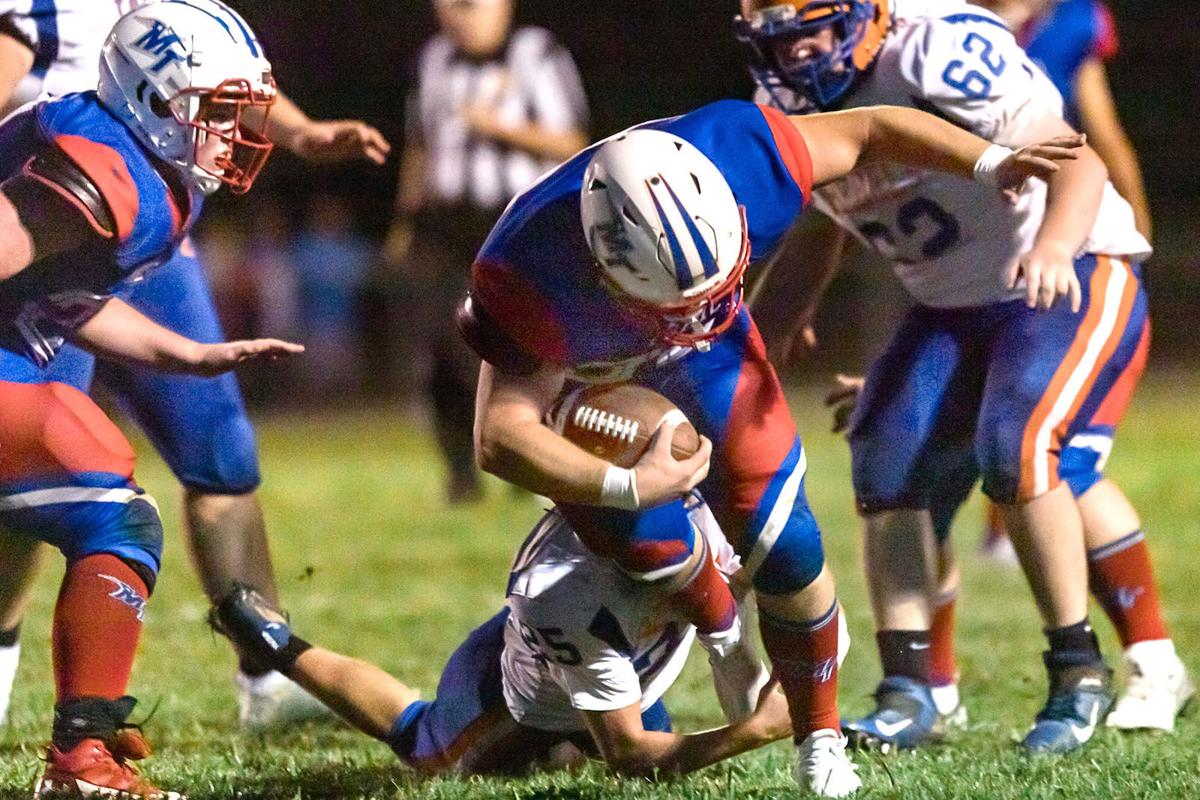 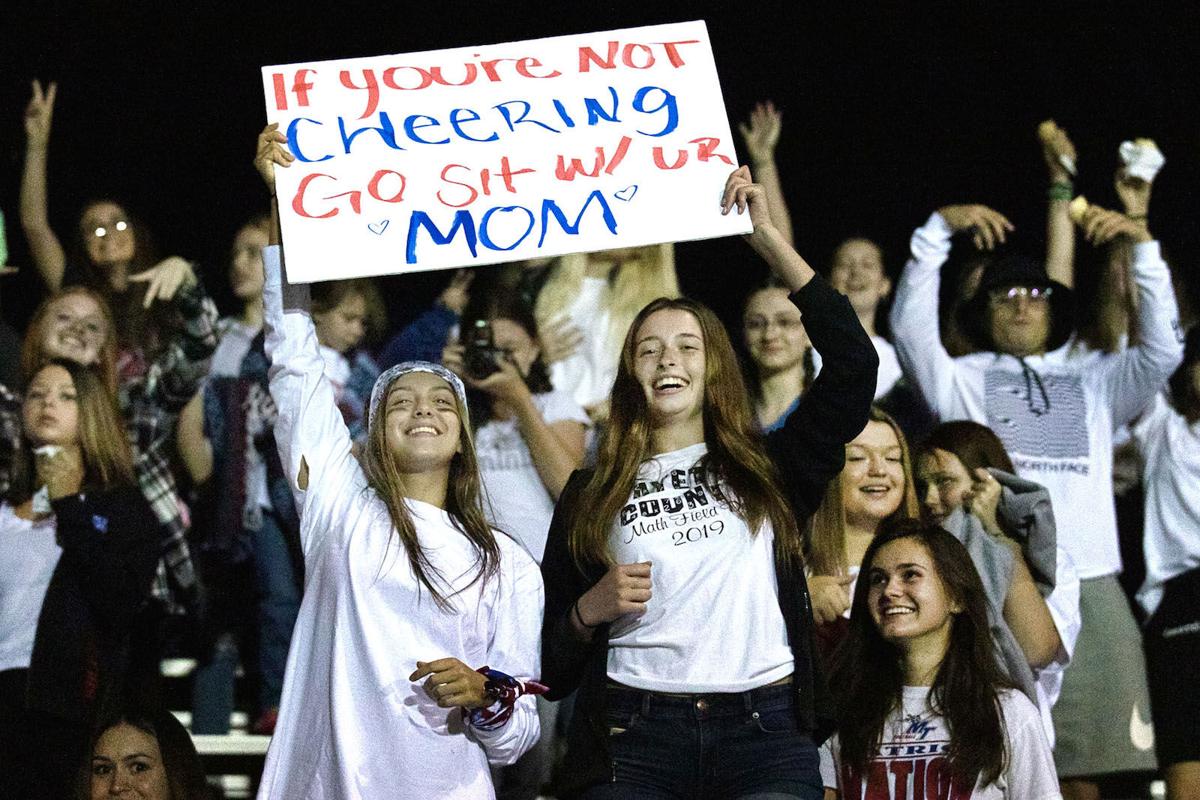 Midland Trail fans, who refer to themselves as The Hico Psychos, get rowdy in the student section. 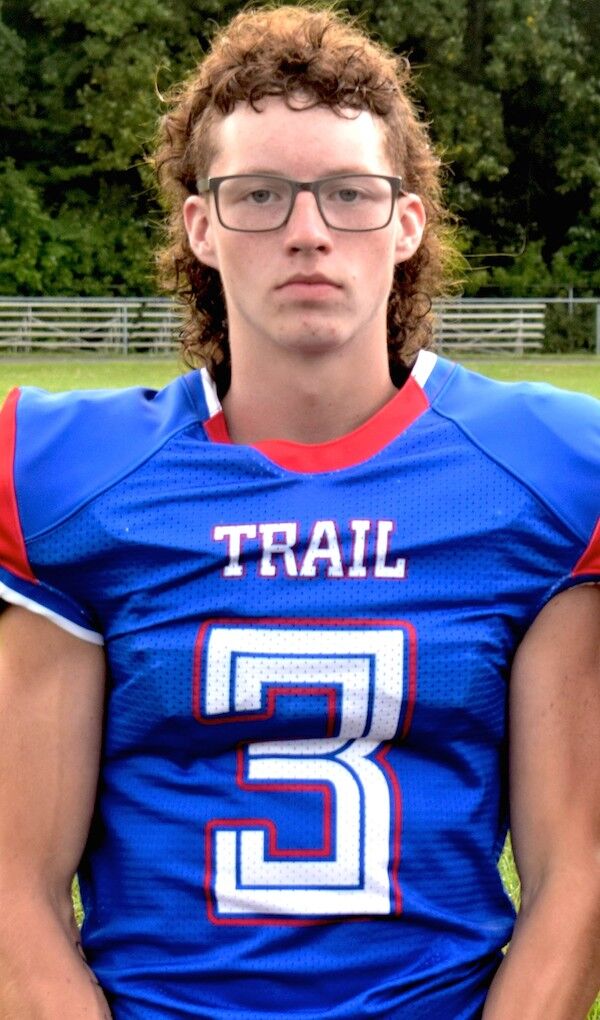 Midland Trail fans, who refer to themselves as The Hico Psychos, get rowdy in the student section.

With Trail playing behind a patchwork offensive line, the victory allowed the Patriots to bounce back from a hard-to-swallow 22-21 loss at Clay in the season opener.

"Covid is so frustrating," said Midland Trail head coach Frank Isaacs. "We had some kids last week contact trace, no issues at all but they (were in) contact trace and not eligible to play.

"We had some injuries from last week that compounded the issue this week. We had four starting linemen out this week, and we were down to our third-string center."

Despite some shakiness, the line play improved as the game wore on, and the Patriots were able to advance the ball enough to control the game against the Rebels.

"We did execute some," Isaacs said. "It's tough when you've got those linemen in different spots and they don't have the reps.

"I don't know when we're getting them back. One of them we're not getting back all year, and that's our starting center (Danny Nottingham).

"You see flashes; we just have to be consistent."

After Tolsia trimmed the deficit to 14-6 on a 20-yard touchdown pass from Joshua Muncy to Eli Blackburn late in the first half, Simms delivered one of those flashes to give the Patriots some breathing room again. Dropping back to pass, quarterback Josh Dickerson bobbled the ball, picked it up and fired a long pass to Simms, who leaped high between two Tolsia defenders and finished off a 55-yard scoring play. Talon Shockey's PAT kick allowed the hosts to carry a 21-6 lead into intermission.

Simms had supplied the Patriots' second score on a 20-yard pass from Dickerson with 2:46 left in the second quarter. The well-executed throw-and-catch play, which came on fourth-and-11 from the 20, capped a drive that was kept alive with a 21-yard screen pass in the left flat from Dickerson to Aden Isaacs.

Later, Simms provided some more fireworks when Trail led by just 21-12 on a 4-yard Muncy-to-Blackburn hookup early in the fourth quarter. That short scoring aerial was tipped by a Midland Trail defender, and the play finished off a drive that featured a key 17-yard pass across the middle from Muncy to David Dingess.

That's when Simms, who also had two interceptions during the game, stepped up again, reaching the end zone on a 28-yard dash on a jet sweep that put the Patriots up 28-12. Isaacs called it "an unbelievable run."

Aden Isaacs tacked on a six-pointer on a 24-yard pass from Dickerson to expand the lead to 34-12 with 5:05 remaining and keep Trail's late momentum going.

Finally, the Rebels got a 9-yard TD sprint from Blackburn — his third score on the evening — with 1 second left, and Muncy's conversion run left the final score at 34-20.

On the night, Dickerson — a senior playing for the first year since sixth grade — was 8-of-14 for 152 yards, three scores and one interception. Simms caught two passes for 75 yards and had the 28-yard TD run, and Isaacs snared five passes for 63 yards and a score.

Midland Trail's first tally, a 3-yard run by Robert Ruffner, was set up by a fumble recovery by Isaacs deep in Tolsia territory.

"We got a W," said Frank Isaacs. "We didn't know them real well.

"We've never played them before. We didn't know what defense they were going to run, which made it even harder for our kids."