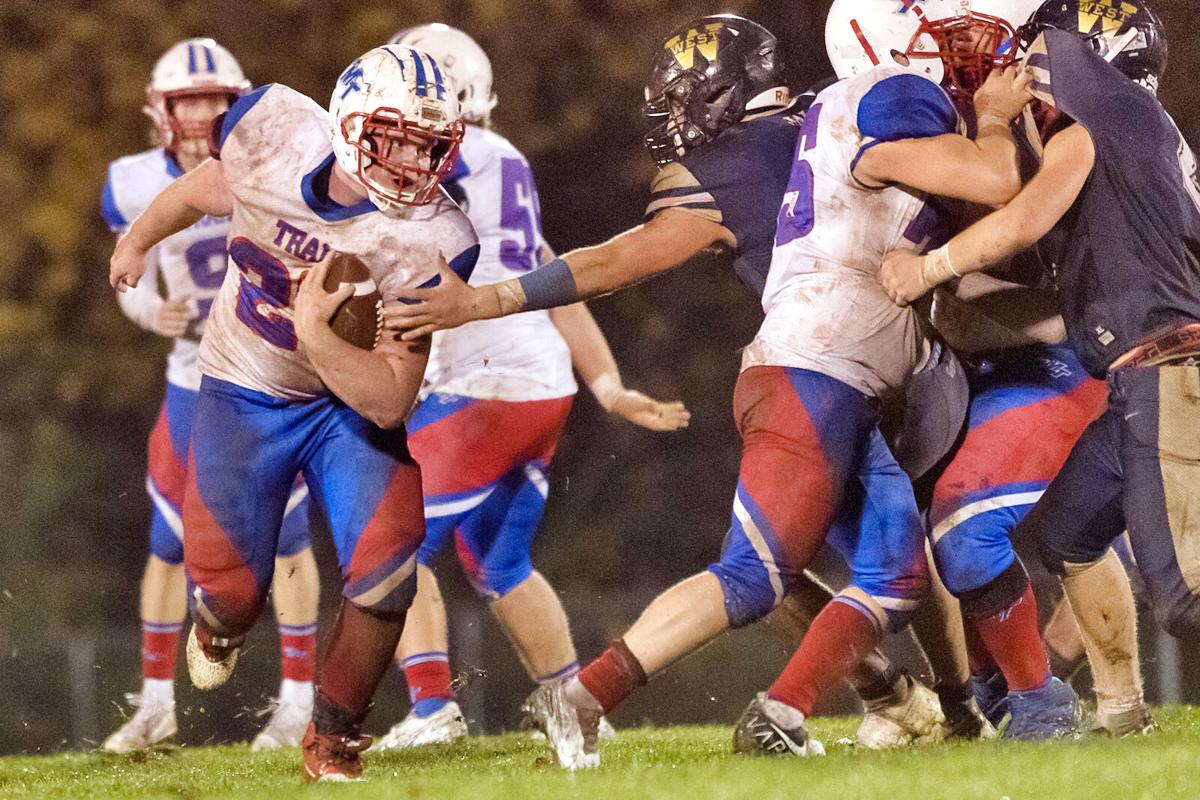 Midland Trail running back Aden Isaacs stares down a Greenbrier West defender as he breaks through the line in Trail's 33-8 win over the Cavaliers. 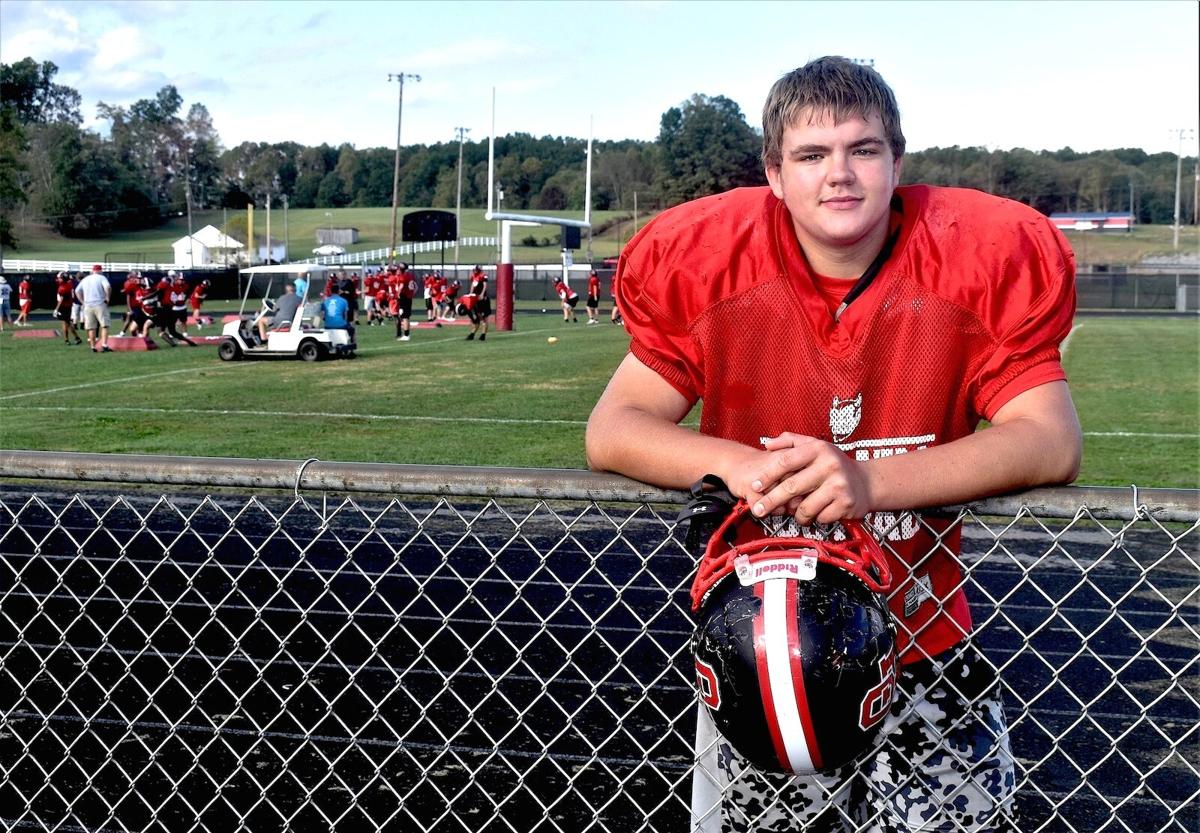 Midland Trail running back Aden Isaacs stares down a Greenbrier West defender as he breaks through the line in Trail's 33-8 win over the Cavaliers.

Below is a recent high school football update:

Seaton Mullins hauled in the two-point conversion after the TD to make it an eight-point game.

Adkins was 14-of-24 for 186 yards. He also connected with Seaton Mullins for a 6-yard TD in the third quarter.

Rian Cooper had 75 receiving yards and intercepted three passes on the evening for the Wildcats (5-4).

"It was probably one of our best overall efforts on both sides of the ball," said Meadow Bridge head coach Dwayne Reichard.

The 'Cats gave up a special teams score, he noted, but "we did create some turnovers."

The win allowed Meadow Bridge to move into No. 17 in this week's WVSSAC Class A ratings, a spot it shares with Fayette County compatriot Midland Trail.

Reichard says his team must contain Titans quarterback Ean Hamrick. "Offensively, they go as their quarterback goes," he said. "He's one of the best in single-A, if not statewide."

"We feel like we've got a pretty good quarterback ourselves, and a good group of receivers that is coming on," he added. "And we've established the ground game.

"We'll try to be on the ground a little more (given weather predictions) this week. It looks like whoever wins gets in (the playoffs) and whoever loses is going to be left on the outside."

Reichard said the squad faced a similar situation a year ago, but didn't produce a win on the final night and was sent home for the year.

Cody Harrell had a rushing touchdown, a receiving touchdown and an interception that led to another score in the Patriots' 33-8 victory over Class A No. 11 Greenbrier West Friday night.

The win improves Midland Trail's playoff hopes and was the third straight win for the Patriots (5-4).

Harrell scored two touchdowns in the first half, giving Trail a 12-0 lead at the break, the first on a 25-yard reverse carry and the second in the second quarter on a 14-yard pass from quarterback Josh Dickerson.

In the second half, the Patriots ran the ball for 142 of their 221 rush yards.

Ty Nickell, the area's leading rusher who was held to 58 yards, got the Cavaliers on the board with a 1-yard run that made the score 19-8.

Dickerson finished the game 5-of-6 for 123 yards and three touchdowns, giving him 17 for the season.

As the Oak Hill Red Devils complete the 2021 football regular season tonight at co-No. 4 University, the last player remnant of the Fayetteville High football program at OHHS will be included in the action.

Brody Warden, a 6-foot-2, 225-pound senior offensive and defensive tackle who played for the Pirates as a freshman before the school closed, has suited up the last two years for the Red Devils. He starts at right tackle on offense, as well as getting some reps at tackle on the defensive line.

"I know the first year I came over here it was my sophomore year," Warden said earlier this season. "It was pretty shaky, and I didn't even play then.

At least five other former Pirates played with him that season, but he's the last one standing this fall. "I get some people talk about it and mess with me since I'm from Fayetteville at Oak Hill," he said.

"I think Moneypenny's done a lot for this team, adapting to triple-A from coaching single-A at Fayetteville," Warden added. "It's a big jump; I think he's adapting good."

He's happy to be finishing his career in a Red Devil uniform. "I'm really happy I came back out. I really wished I played my sophomore year. Sometimes I do (miss Fayetteville), but I'm kind of happy to be here, too."

Making the transition from Fayetteville to Oak Hill "was not as nearly as bad as I thought it would be," he said. "I was expecting fights all the time. I was expecting it to be awful, but I'm really happy about being here."

"It's special," Moneypenny said. "It gets emotional at times.

"He's the last of the finest of the Pirates. But we're having a great time here at Oak Hill."

Throughout each week, the initiative engages with student-athletes, coaches, school officials and communities across West Virginia. Representatives from the attorney general’s office inform the respective coaches as to the dangers of opioid use and provide educational material for display and distribution in the schools to foster more discussion of the issue.

The week culminates with Morrisey's office staffing an information booth at each of the events to distribute opioid abuse awareness materials.

"Prevention remains key in tackling the devastation wrought by opioid abuse once and for all," Morrisey said. "Each week this initiative provides yet another opportunity to present lifesaving information to communities across West Virginia. Without education, addiction can begin with treatment for the most routine of injuries, so it is crucial that we inform everyone – young and old – about the risks of prescription opioids in hopes that added awareness can make the difference in stopping senseless death."

The initiative, now in its fifth year, is part of a broader partnership to tackle opioid use in high school athletics. It involves the AG's office, West Virginia Secondary School Activities Commission and the West Virginia Board of Medicine.

"We live in an area with a high rate of drug abuse," said Meadow Bridge head coach and athletic director Dwayne Reichard. "So anytime we can bring awareness to the opioid situation, we are glad to help, and we believe it's our duty to do our part.

"That's why we're glad to partner with the Attorney General's office on this effort."